What Is Planet Nine, And Does It Even Exist?

Planet Nine - also referred to as Planet X - is a massive, hypothetical object in an elliptical orbit far beyond Pluto, roughly at a distance that would take 10,000 to 20,000 Earth years for it to complete a single trip around the Sun.

Though no direct observations have ever been made of an object fitting the description of Planet Nine, unexpected patterns in the orbits of other, smaller objects in the icy outer reaches of the Solar System could be explained by the gravitational pull of such a body.

In early 2016, California Institute of Technology astronomers Mike Brown (famed for his role in demoting Pluto from its rank as the ninth planet in 2005) and Konstantin Batygin announced their observation of dwarf planet 2012 VP113's orbit lining up uncannily well with the orbits of five other extreme trans-Neptunian objects.

Though potentially a coincidence, the odds of this clustering occurring without something tugging them into place were around 1 in 14,000, according to Brown.

Two years later, trans-Neptunian object 2015 BP519 was also calculated to be on an unusual trajectory, one that could be affected by a similar mass. 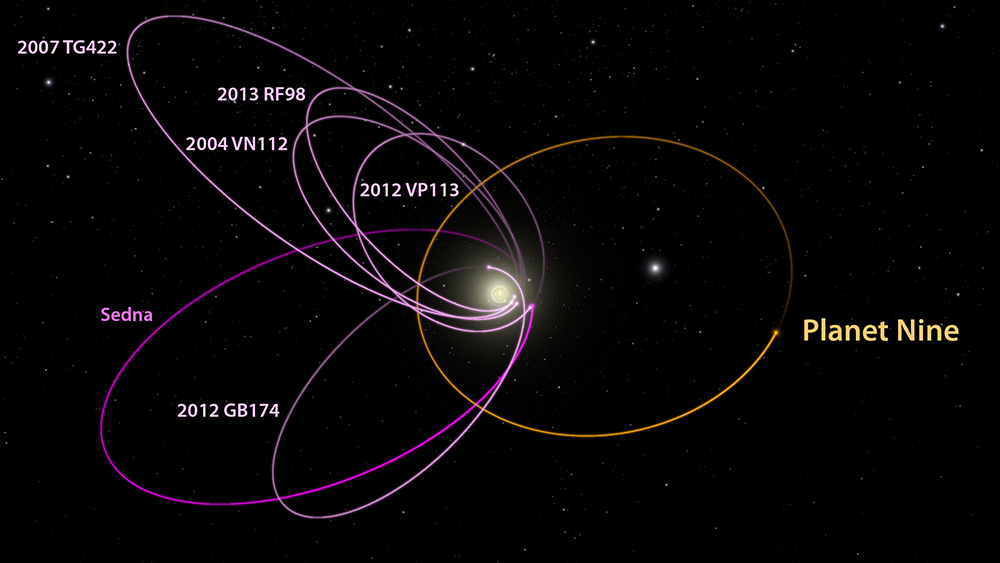 Above: Six distant objects in the Solar System with orbits exclusively beyond Neptune (magenta) all line up in a single direction, and tilt nearly identically away from the plane of the Solar System. The orange ellipse indicates the hypothetical Planet Nine orbit required to maintain this configuration.

To date, the best evidence of an undiscovered planet in the farthest reaches of our Solar System remains this clustering, along with a strange inclination of their orbits and the orbit of 90377 Sedna that can't be explained by the presence of Neptune.

However, subsequent analyses carried out by the Outer Solar System Origins Survey, as well as several other survey results, have found no sign of clustering among other relevant trans-Neptunian objects, making Planet Nine's existence extremely contentious for now.

Assuming this planet-like object really does exist out there, Planet Nine's mass would most likely be a magnitude (roughly 10 times) greater than Earth's, with a girth approaching the range of one of our ice giants.

A likely scenario explaining the body's far-flung position puts its origins somewhere between the orbits of Jupiter to Neptune, with a birth much like any of the other gas planets in our Solar System.

Before it could gorge itself, Planet Nine would have received a kick from the gravity well of one of the two gas giants, and found itself out among the icy wastes.

In spite of its large, slow orbit, enough time should have passed since the dawn of the Solar System for it to have cleared its orbit of frozen chunks of dust and rock, earning this stunted gas ball an official planetary title.

Alternatively, though vanishingly less likely, Planet Nine could be an adopted child snatched away from another passing star long, long ago.

What else could explain unusual clustering of trans-Neptunian object orbits?

Errors, biases, or coincidences aside, strangely linked orbits among trans-Neptunian objects could be the result of several phenomena other than a big, hidden planet.

For example, multiple smaller objects in the right area, at the right time, could provide the necessary gravitational heave

On a more exotic level, a large, dark mass could be explained by the presence of a tiny black hole, one barely large enough to fit inside your fruit bowl.

Less exciting is the possibility of mathematically described instabilities in an orbiting disc.

How could we confirm that Planet Nine exists?

If Planet Nine exists, its extreme remoteness - somewhere around 10 times farther out than Neptune - limits the amount of sunlight reflecting back from its surface. Spotting it would be made harder the farther away it is. Not just because of its dullness, but its relative drop in orbital speed would make differences in position harder to identify.

There are telescopes capable of observing an object of this size, though with so much sky to cover, researchers would first need to whittle down sections of space where Planet Nine is unlikely to exist.

For now, our Solar System remains an eight-planet family. Even if no sign of a ninth member is found, our search could reveal more than enough secrets about our astronomical neighborhood to make the hunt worthwhile.

All Explainers are determined by fact-checkers to be correct and relevant at the time of publishing. Text and images may be altered, removed, or added to as an editorial decision to keep information current.