There's Exciting New Evidence a Real Planet Nine Is Out There

Is there a ninth planet out there in our solar system, lurking out of sight of astronomers, far past the orbit of Pluto (the ex-ninth planet)? According to new observations of a strangely behaving rock in deep space, the answer just might be yes.

The new object we can see and observe is called 2015 BP519, and looks like it could be as big as a dwarf planet itself.

What's interesting is that the rock isn't on the same plane as the Solar System planets, which are all spread out like a disc – it's at a 54-degree angle.

And one of the possible explanations for that rather crazy orbit is the existence of another planet, far beyond Neptune and around 10 times the mass of Earth. A planet that size would provide the necessarily pull to keep 2015 BP519 where it is.

"It's not proof that Planet Nine exists," one of the research team, astronomer David Gerdes from the University of Michigan, told Shannon Hall at Quanta. "But I would say the presence of an object like this in our solar system bolsters the case for Planet Nine."

The new clue to Planet Nine's existence was spotted in data from the Dark Energy Survey, which is attempting to map the parts of space way beyond our own corner of it.

And it also fits in with a prediction made a couple of years ago: researchers had previously noticed odd alignments in the position of Kuiper Belt Objects (KBOs), towards the fringes of the known Solar System.

Six of these KBOs looked as if they'd been forced into orbital alignment by a huge, hidden ninth planet – and back in 2016, astronomers Konstantin Batygin and Michael Brown from the California Institute of Technology suggested that over time, KBOs like these could get pushed into higher orbital inclinations.

The researchers behind the new study have been working on their calculations since 2014, so a lot of celestial number-crunching is involved.

They ran simulations covering billions of years to try and explain how the newly discovered space object got to where it is. 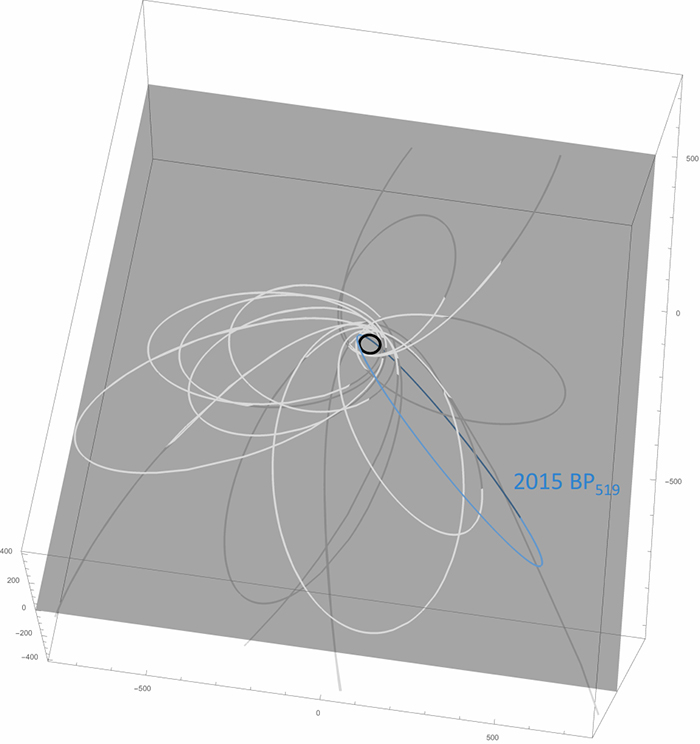 A giant extra planet ended up being the only way that the simulations worked to match what our telescopes are telling us.

"The second you put Planet Nine in the simulations, not only can you form objects like this object, but you absolutely do," one of the team, Juliette Becker from the University of Michigan, told Quanta.

Before we start reprinting Solar System maps, it's worth bearing in mind that the paper reporting these findings has yet to be peer-reviewed and formally published.

The researchers themselves admit we need to find more objects like 2015 BP519, and corroborate various data points in the Dark Energy Map, if we're to prove Planet Nine exists.

One alternative explanation is that there was something out in the early Solar System that we don't know about that could've given 2015 SP519 an extra kick.

Nevertheless, it's a tantalising clue that we've got another planet orbiting the Sun way out there in space. If Planet Nine exists, we're expecting it to be a cold, icy giant because of its distance from the Sun, and the work to try and spot it continues.

"There is no other reasonable way to populate the Kuiper belt with such highly inclined bodies," Batygin told Quanta. "I think the case for the existence of Planet Nine is now genuinely excellent."

You can read the research on the pre-print server arXiv.org.