If You Can't Make This Solar Eclipse, Here's When Your Next Chance Will Be

Next week's eclipse will be the first to cross the entire continental United States since 1918, however.

According to NASA, the total solar eclipse on February 26, 1979 crossed through Washington, Oregon, Idaho, Montana, North Dakota, and the Canadian provinces of Saskatchewan, Manitoba, Ontario and Quebec.

On August 21, only people in the relatively thin line of totality will get to see the full eclipse; most parts of the country will only see a partial one (when the moon covers a portion of the sun). If you're not going to see the total effect this year, though, your next chance is not too far away.

After the August 2017 solar eclipse, the US will see another solar eclipse on October 14, 2023. That one will be annular, however - which means the edge of the sun will remain visible as a bright ring around the moon.

For globetrotting eclipse chasers, the next total solar eclipse anywhere on Earth will take place December 14, 2020, with a visit to Chile or Argentina required for the best view.

A total solar eclipse is an astronomical phenomenon that occurs when the moon passes between Earth and the sun, and appears to cover the latter. The two other types of eclipses are annular and partial.

In Earth's history, there have been some 3 billion solar eclipses in the US alone, though some were partial rather than total.

The best cities in the US to see it will be Salem, Oregon; Nashville, Tennessee; Kansas City, Missouri; Lincoln, Nebraska; and Columbia and Charleston, South Carolina.

Here's a map of the August 21 eclipse's path across the country: 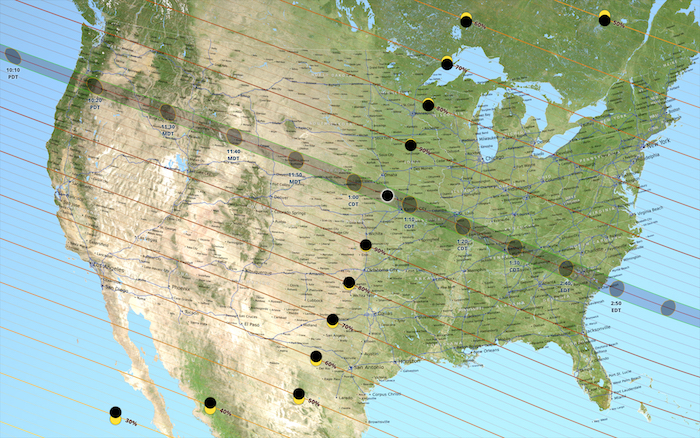 More from Business Insider:
Trending News
Shimmering 'Lakes' Under The South Pole of Mars Might Be Something Else Entirely Space2 days ago
Diamond From 660 Kilometers Below Earth's Surface Reveals a Water-Rich Environment Nature3 days ago
Ancient Maya Cities Appear to Have Been Riddled With Mercury Pollution Humans4 days ago