The way things behave in microgravity may seem obvious to us now, after humans have been venturing into space for over 50 years.

But we haven't always been certain how space might affect certain things. Like fire. Or planarian worms. Or even plants. It's only by conducting experiments that we can learn the answers to these burning questions.

That has led to some pretty fascinating, sometimes upsetting, and sometimes downright wacky experiments conducted in space.

A spacesuit gets shoved out an airlock

The video above plays out like something out of a nightmare. A spacesuit floats, untethered, away from the International Space Station ISS), the vast black void of space yawning before it.

You may be relieved to learn that no humans were harmed in the making of this experiment - there's no one in the Russian Orlan spacesuit, nicknamed Ivan Ivanovitch or Mr Smith - it's stuffed with a bunch of old clothes and a radio transmitter.

The idea was that old spacesuits could be used as satellites. SuitSat-1 - officially designated AMSAT-OSCAR 54 - was deployed on 3 February 2006, but the experiment was only partially successful; reports vary, with NASA claiming the transmitter had died shortly after release and Russia reporting a final transmission a whole fortnight later. The last confirmed signal was received on 18 February.

SuitSat-1 went on to spend several months in silent orbit, before entering Earth's atmosphere and burning up on 7 September 2006.

The hammer and the feather

In the late 16th century, Galileo Galilei dropped two spheres of unequal mass from the Leaning Tower of Pisa in Italy. When both arrived on the ground at the same time, he'd countered classically established views, by showing mass had no bearing on gravitational acceleration. All objects, no matter the mass, should fall at the same rate - even if it's a feather and a hammer.

On Earth, this is tricky to demonstrate due to air resistance. But nearly 400 years later, a human standing on the Moon repeated the experiment.

On 2 August 1971, Commander David Scott of Apollo 15 took a geological hammer in one hand, and a falcon feather in the other. He raised them to a height of about 1.6 metres off the ground, and dropped them. Because the astronaut was essentially in a vacuum, without air resistance the two objects fell in sync.

"Within the accuracy of the simultaneous release, the objects were observed to undergo the same acceleration and strike the lunar surface simultaneously," wrote NASA astronaut Joe Allen, "which was a result predicted by well-established theory, but a result nonetheless reassuring considering both the number of viewers that witnessed the experiment and the fact that the homeward journey was based critically on the validity of the particular theory being tested."

The hammer and feather are both still up there.

Fizzy tablet in a water blob

In microgravity, if you squirt a bit of water out of a nozzle, it just hangs there, all blobby and wobbling.

This can result in a lot of fun. Experiments and demonstrations have included popping water balloons in the vomit comet (the plane that makes parabolic flights to create brief periods of free-fall) and the ISS, attaching a blob of water with a large bubble inside to a speaker to observe the vibrations, and putting a GoPro camera in a water blob to film it from the inside (you'll want stereoscopic 3D glasses for that one).

In 2015, astronaut Scott Kelly coloured a water blob with food colouring, then inserted effervescent tablets, watching them dissolve and release gases into the water. It was filmed using the space station's new 4K camera, so you can view the whole alien-algae-spawning... thing in gloriously crisp resolution. 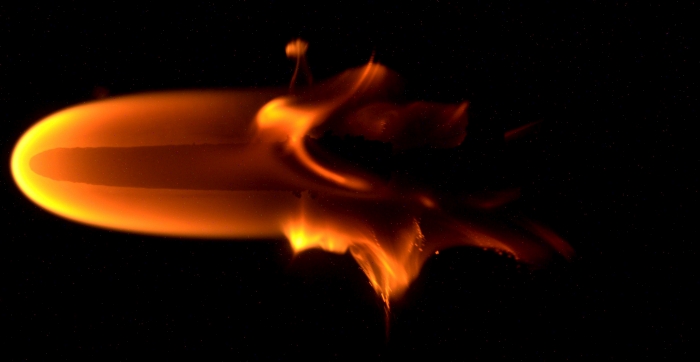 Just as water behaves differently in microgravity, so too does fire. The Mir space station fire of 1997 has thankfully been a one-off event so far, but working out how fire behaves in microgravity can help plan for fire safety for future long-term missions such as the crewed mission to Mars, and the permanent Moon base. It can help to inform fire safety protocols down here on Earth, too.

To that end, a number of ongoing research projects have studied what happens to flames in space. The Burning and Suppression of Solids experiments aboard the ISS have investigated the burning and extinction characteristics of a broad range of fuel types in microgravity. Data from these experiments can be used to build more complex models to understand the finer details of combustion in Earth gravity.

Aboard the Cygnus cargo spacecraft, scientists investigated how flames behave under different spacecraft conditions in the Saffire experiments. And NASA's Flame Design investigation - part of the Advanced Combustion via Microgravity Experiments - is exploring the production and control of soot.

All of which is very useful and interesting, sure. But it's also insanely beautiful, and we bet there are some astronauts having an absolute blast playing with fire in space.

In 2011, scientists set about answering the burning question: Can spiders adapt to space travel? They sent two golden silk orb-weaver spiders (Trichonephila clavipes), Esmeralda and Gladys, for a 45-day sojourn aboard the ISS.

They were kept in a nice habitat (can you imagine spiders loose on a space station), with light conditions to simulate a night-day cycle, temperature and humidity control, and a healthy diet of juicy fruit flies.

Both spiders adapted beautifully, continuing to spin their webs and hunt their food. Orb weavers eat their webs at the end of each day to regain protein, and spin them again in the morning; this, too, the spiders continued to do right on schedule, which was interesting, since different orb weaver species on the ISS just spun their webs at any old time of day.

But not everything was totally normal. In microgravity, the spiders spun their webs differently - flatter and rounder, compared to the more three-dimensional, asymmetrical structures the orb-weavers spin on Earth.

The two spiders returned to Earth at the end of their stay in space. Esmeralda perished on the return journey, having lived a normal spider lifespan. Gladys returned home hale, but turned out to be a boy. He was renamed Gladstone.

Tortoises go round the Moon

Back in the 1960s, before humans had been to the Moon, it wasn't clear exactly how - if at all - getting up close and personal with the Moon would affect us physically. So, in 1968, the Soviet space program sent two Russian tortoises (Agrionemys horsfieldii) up for a trip round Earth's companion.

Actually, it wasn't just tortoises. Included in the flight were wine flies, mealworms, seeds, plants, algae and bacteria. There was also a dummy fitted with radiation sensors, since none of the living organisms aboard were remotely analogous to humans. Tortoises, according to a 1969 report, seem to have been chosen because they're relatively easy to strap down.

The two unnamed reptilian cosmonauts were placed onboard the Zond-5 spacecraft on 2 September 1968, at which point they were no longer fed. They were launched into space on 15 September 1968, returning back to Earth (in the Indian ocean) on 21 September. They finally returned to Moscow on 7 October.

Their journey included seven days of spaceflight, several days in tropical climates (including bobbing about in the ocean while they waited for retrieval) and transportation back to Russia. Ultimately, they spent 39 days without food. It would try anyone.

Control tortoises that remained on Earth were also deprived of food for the same time period. A comparison of the two sets of tortoises revealed that any changes in the space-faring reptiles were mostly the result of starvation, with a small contribution from spaceflight-related atrophy.

We'd like to say that no one ever sent tortoises to space again, but sadly, two more tortoise missions took place. Zond 7 in 1969 carried tortoises. In 1975, the Soyuz 20 spacecraft ferried a tortoise around for 90 days. And two tortoises flew on the Salyut-5 space station in 1976.

Just as we once didn't know how space would affect animals, so too were we unaware of its effects on plants. So when the Apollo 14 mission launched on 31 January 1971, its cargo contained something we might now consider a bit peculiar: roughly 500 seeds.

Scientists from the US Forest Service wanted to know if tree seeds that had flown in microgravity and been subjected to space radiation would sprout, grow and look the same as seeds that had never left Earth.

The seeds were then planted and tended, and most of them survived to grow into saplings, alongside controls that had never left Earth. Unsurprisingly to us now, there was no discernible difference between the two.

By 1975, the Moon Trees, as they had come to be known, were large enough to be transplanted, and they were shipped all over America. According to this NASA website, less than 100 Moon Trees can be accounted for today, and of those, only 57 were living when the page was put together.

That means there could potentially be hundreds of Moon Trees hiding across the US, a lost relic of a time when our curiosity sent tiny seeds whizzing around space. And we think that's beautiful.