A Rare Comet Is Zooming Past Earth Right Now, And You Should Be Able to See It With Binoculars

Forget the New Year's Eve fireworks, NASA has announced that a comet currently zooming through the inner Solar System will be so bright over the next week that we should be able to see it in the night sky with binoculars.

The comet was first detected by NASA's NEOWISE mission in October, and its trajectory is currently taking it on a safe pass by Earth as it approaches the Sun. But as it zooms by, it should be so bright between now and January 14 that we'll be able to see it using just binoculars, and maybe even with the naked eye.

The comet, called C/2016 U1 NEOWISE, "has a good chance of becoming visible through a good pair of binoculars, although we can't be sure because a comet's brightness is notoriously unpredictable," said Paul Chodas, manager of NASA's Centre for Near-Earth Object (NEO) Studies.

According to David Dickinson at Universe Today, "comet C/2016 U1 NEOWISE is set to break binocular +10th magnitude brightness this week, and may just top +6th magnitude (naked eye brightness) in mid-January near perihelion".

Magnitude brightness refers to how bright an object is in the night sky, and the lower the number, the better. For perspective, Venus is around –4.4 magnitude at maximum brightness ,and the Moon is –12.7 magnitude.

So what can you expect to see? Something a little like this, although slightly further away, seeing as this picture of the comet was taken with a telescope on December 23 in Austria: 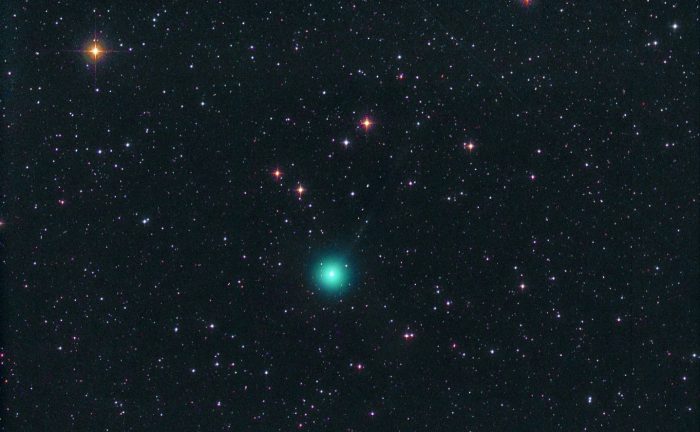 Comets are so unpredictable in their visibility because they're made up of ice, dust, and rocky material, and as they approach the Sun, they tend to heat up rapidly and quickly start shedding material in a glorious dust trail. This change in composition can rapidly change how visible the comets are in the night sky - sometimes they become brighter, and sometimes they go dark.

Researchers still don't know a lot about comet C/2016 U1 NEOWISE, but they predict that its orbit around the Sun could be up to millions of years long, which means that this might very well be the first time the comet has passed through the inner Solar System. And definitely the last time it'll get this close to us in our lifetime.

Although the prospect of being able to see a comet with your naked eye as it whizzes past might sound terrifying, don't worry, comet C/2016 U1 NEOWISE has already made it through the closest pass of Earth on December 13, at a distance of around 106 million km (66 million miles).

This week, it's around 140 million km (87 million miles) away as it approaches the Sun - around 350 times further away from us than our Moon. So there's no danger of it hitting us.

But for keen skywatchers, it should put on a hell of a show. If you want to watch it as it whizzes by, the best place to view it from is the Northern Hemisphere next week, and you should look to the southeastern sky shortly before dawn.

"At its brightest, comet C/2016 U1 NEOWISE will pass through the constellations Ophiuchus to Serpens Cauda and Sagittarius, and is best visible in the dawn sky 12 degrees from the Sun at maximum brightness," explains Universe Today.

The comet will be at its closest point to the Sun on January 14, when it will be just inside the orbit of Mercury before it heads back out to the outer Solar System. That proximity to the Sun will make it harder to see in mid January, but there should be another chance on the last day of the month for Southern Hemisphere dwellers to spot it before it gets too distant.

NASA's NEOWISE mission has also announced the discovery of another mysterious celestial object passing through our neighbourhood in the coming weeks. The second object, called 2016 WF9, seems to straddle the blurry line between an asteroid and a comet, and scientists aren't quite sure what to make of it just yet.

Unlike icy comets, asteroids are made up of metal and rocky materials, and so they don't release dust trails as they approach the Sun. This also seems to be the case for 2016 WF9, but it also appears to have the reflectivity and body structure of a comet.

So far all we know for sure is that 2016 WF9 is pretty large - up to 1 km (0.6 miles) across - and is also relatively dark, with only a small percentage of the light that lands on its surface reflecting back to Earth. Which could explain why we've never seen it before.

Unlike comet C/2016 U1, 2016 WF9 passes by our planet pretty regularly. It's furthest point from the Sun is around Jupiter's orbit, and over the course of 4.9 years it travels towards the Sun, swinging just inside Earth's orbit before heading back towards the outer Solar System.

That's what's happening this year on February 25, when the object will pass our planet at a distance of nearly 51 million km (32 million miles). For now, that's not close enough to worry about, but scientists will be keeping a close eye on it in the hopes of learning more about its structure, and whether it might be an issue for Earth in the future. They will hopefully be able to classify it as either a comet or an asteroid, too.

"This object illustrates that the boundary between asteroids and comets is a blurry one; perhaps over time this object has lost the majority of the volatiles that linger on or just under its surface."

Whatever the case, there's nothing quite like seeing a comet zoom by our little planetary rock to remind us of just how small - and special - we are in the vast expanse of the Universe. So don't forget to look up next week.