Parts of North America Are Currently Heading For a Megadrought, Study Finds

Even though air pollution levels have been dropping in the wake of the coronavirus outbreak, the climate crisis isn't going to go away. In fact, parts of the US and Mexico could be in line for a "megadrought" in the very near future, scientists warn.

Based on an analysis of precipitation levels since the turn of the century, and how they match up with soil moisture levels recorded by tree rings over the last 1,200 years, future modelling suggests the southwestern North American (SWNA) region could see a drought that's worse than any in recorded history.

The conditions we've seen in the SWNA region since 2000 match up with times of severe drought in the past, the researchers say. It's possible that a megadrought has already started, though 2019 precipitation levels did offer some respite. 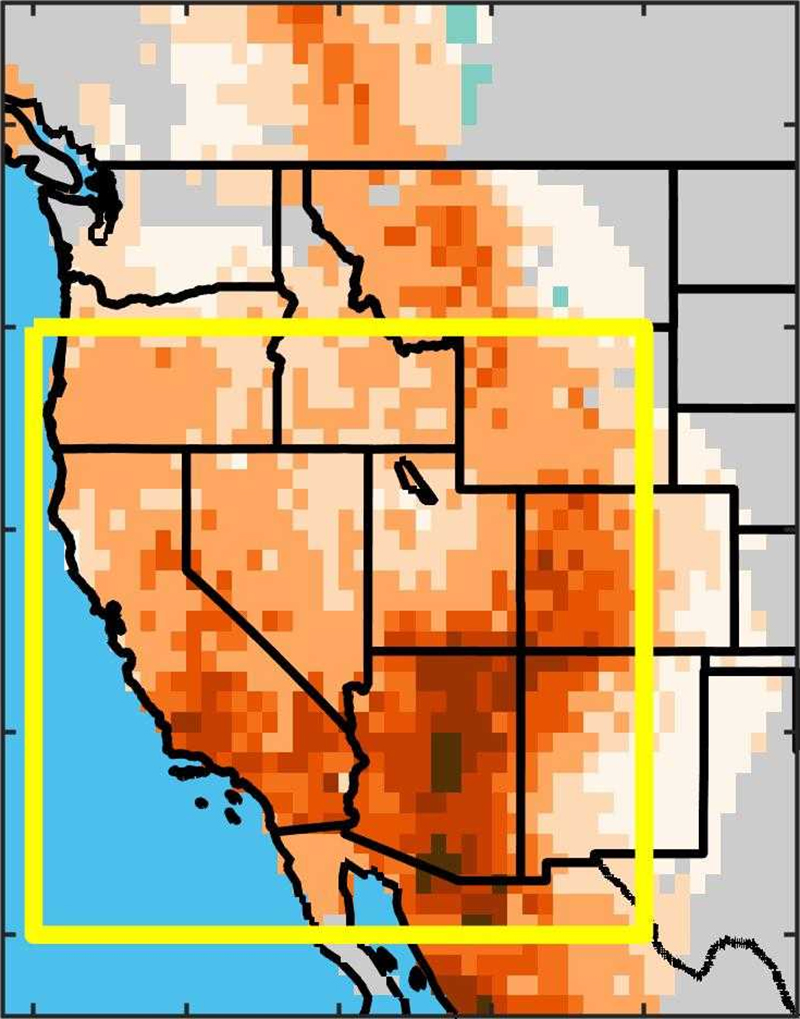 The area covered by the study. (Adapted from Williams et al., Science, 2020)

"Earlier studies were largely model projections of the future," says bioclimatologist Park Williams, from Columbia University. "We're no longer looking at projections, but at where we are now."

"We now have enough observations of current drought and tree-ring records of past drought to say that we're on the same trajectory as the worst prehistoric droughts."

Reliable weather records only go back to around 1900, but the researchers studied the ring patterns in thousands of trees to calculate soil moisture levels – and therefore rainfall – right back to 800 CE.

They identified four megadroughts that were particularly severe, and the 19 years from 2000-2018 is outdoing three of those droughts in terms of lack of moisture, and is closely tied with the fourth (1575 to 1603).

The analysis also showed that this current drought is affecting wider areas, and affecting them more consistently, which the team attributes to climate change.

While the current drought may have happened anyway, the researchers estimate global warming is responsible for half of the drought's pace and half of its severity, producing hotter air that can hold more moisture pulled out of the ground.

"It doesn't matter if this is exactly the worst drought ever," says environmental scientist Benjamin Cook, from Columbia University. "What matters is that it has been made much worse than it would have been because of climate change."

The earlier droughts were brought on by natural factors such as cooling ocean temperatures that blocked storms from reaching the west coast of the US. Add those factors to human-caused temperature rises of about 1.2 degrees Celsius (2.2 degrees Fahrenheit) and it's a scary picture.

That temperature rise could cancel out the natural variability in precipitation seen in past centuries, making droughts longer, drier, and more widespread. The signs of this shift are appearing everywhere, not just in North America.

The study also showed that the 20th century was the wettest of all from the 1,200-year period covered – which may have lulled us into a false sense of security about how hard we would need to work to protect water supplies.

"The 20th century gave us an overly optimistic view of how much water is potentially available," says Cook. "It goes to show that studies like this are not just about ancient history. They're about problems that are already here."