An Epic, Planet-Scale Wave Has Been Hiding in The Toxic Clouds of Venus For Decades

Deep in the thick, poisonous clouds wrapped around Venus, the atmosphere is behaving very oddly. A giant, previously unknown planet-scale wall of cloud travels westward around the planet every 4.9 days - and apparently has been doing so since at least 1983.

It can extend up to 7,500 kilometres (4,660 miles) long, stretching across the equator to both the north and south mid latitudes, at relatively low altitudes between 47.5 and 56.5 kilometres. It's a phenomenon that's never been seen anywhere else in the Solar System.

"If this happened on Earth, this would be a frontal surface at the scale of the planet," said astrophysicist Pedro Machado of the Institute of Astrophysics and Space Sciences in Portugal. 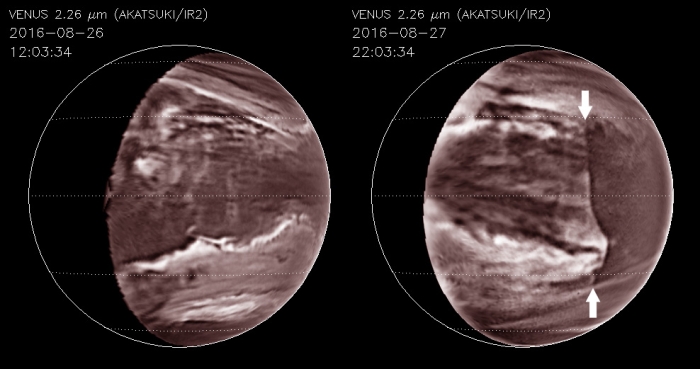 Venus is an extreme sort of place for a rocky habitable zone planet. It's completely shrouded in a thick atmosphere made up almost entirely of carbon dioxide that rotates 60 times faster than the planet itself, producing insane winds.

The atmosphere rains sulfuric acid, and its atmospheric pressure at 0 altitude is almost 100 times greater than Earth's. If that weren't bad enough, it's lander-meltingly hot, with an average surface temperature of 471 degrees Celsius (880 degrees Fahrenheit).

That cloudy atmosphere is a fascinating place, and prone to huge waves. A bow-like structure 10,000 kilometres long that comes and goes in the upper atmosphere is a stationary gravity wave, thought to be generated by the rotating atmosphere blowing up against a mountain on the surface. Another planet-encircling Y-shaped wave in the cloudtops is a wave distorted by Venus' powerful winds.

But there's more. When studying infrared images taken by Japanese Venus orbiter Akatsuki between 2016 and 2018, a team of researchers led by physicist Javier Peralta of the Japanese Space Agency (JAXA) spotted a feature that looked a lot like an atmospheric wave, but at an unprecedented altitude.

The new feature is different. It's much deeper than any atmospheric wave ever seen before on Venus, occurring in the cloud layer responsible for the greenhouse effect that makes the surface so scorchingly hot.

Careful analysis, as well as a study of past observations, showed that the feature has been recurrent, but heretofore unnoticed, since at least 1983, since it could only emerge through a collection of observations from a large number of instruments over a period of time.

The newly identified feature, the researchers found, can span up to 7,500 kilometres, and circles the planet once every 4.9 days at a velocity of around 328 kilometres per hour (204 miles per hour). That's a little faster than the clouds at this level, which have a rotation period of about 5.7 days.

But it's still unknown what causes it.

"This atmospheric disruption is a new meteorological phenomenon, unseen on other planets. Because of this it is yet difficult to provide a confident physical interpretation," Peralta said.

Numerical simulations, however, reveal that many of the disruption's properties can be seen in a nonlinear atmospheric Kelvin wave. Here on Earth, these are large gravity waves (not to be confused with gravitational waves) that are sometimes 'trapped' at the equator and are affected by the planet's rotation.

Like Earth's Kelvin waves, the Venusian feature propagates in the same direction as the winds that circle the planet - and it has no effect on meridional winds that blow between north and south. 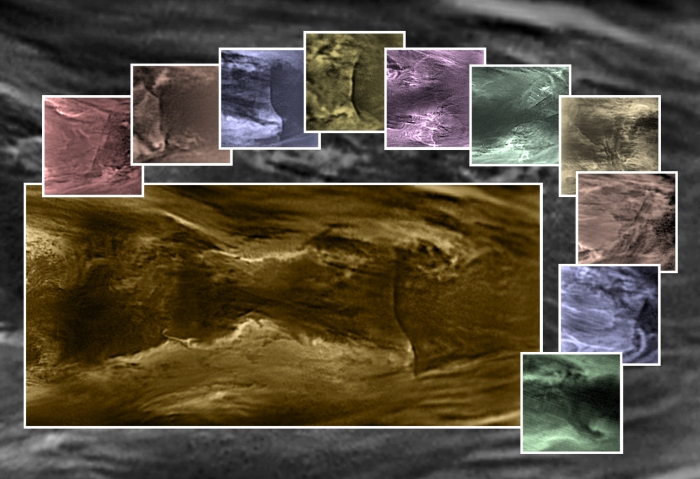 If the feature is a Kelvin wave, that could have interesting implications. We don't, for instance, understand why Venus' atmosphere rotates so fast. Kelvin waves can interact with other kinds of atmospheric waves, such as Rossby waves.

This could have implications for the atmospheric super-rotation. And a Kelvin wave could also help us understand the relationship between Venus' surface topography and the dynamics of its atmosphere.

"Since the disruption cannot be observed in the ultraviolet images sensing the top of the clouds at about 70 kilometres height, confirming its wave nature is of critical importance," Peralta said.

"We would have finally found a wave transporting momentum and energy from the deep atmosphere and dissipating before arriving at the top of the clouds. It would therefore be depositing momentum precisely at the level where we observe the fastest winds of the so-called atmospheric super-rotation of Venus, whose mechanisms have been a long-time mystery."

More observations are currently underway, to see if more light can be shed on this mysterious wall.