Along the coastline of Mexico's Yucatán Peninsula, a hidden underwater world lies just below the surface, as rich in geological marvels as it is the treasures of the Maya civilization who once inhabited it.

Within the deep caves and plunging cenotes – naturally formed sinkholes – that populate this ancient, mysterious landscape, researchers have just now made yet another remarkable discovery.

Submerged at the bottom of a cenote in an archaeological site called San Andrés near the ancient Maya city of Chichen Itza, divers with the National Institute of Anthropology and History (INAH) found an intact and well-preserved Maya canoe, estimated to be over 1,000 years old.

"While we were taking a break for decompression in the cenote … I noticed that five meters below the current water level there was a dark imprint on the stone wall," explains archaeologist Helena Barba Meinecke, the head of the INAH's underwater archaeology unit (SAS). The canoe, which initial estimates date to 830–950 CE (in conjunction with the Terminal Classic period of Maya history, with which Chichen Itza is most associated), will undergo dendrochronological analysis in the future, to give us a more precise idea of when this boat was used, and what kind of wood it was built from.

The researchers say the boat might have been for the purpose of conducting rituals, in which offerings may have been made to the Maya gods, or could have also been used to ferry water out of the cenote (perhaps the better to delve within it).

The entrance to the cenote. (Yucatán Peninsula Office of SAS-INAH)

While fragments of boats like this (and their oars) have been located previously in other sites – including in Quintana Roo, Guatemala, and Belize – the new discovery appears to be one of a kind due to its intact state.

"The relevance lies in the fact that it is the first canoe of this type that is complete and so well preserved in the Maya area," the researchers explain. 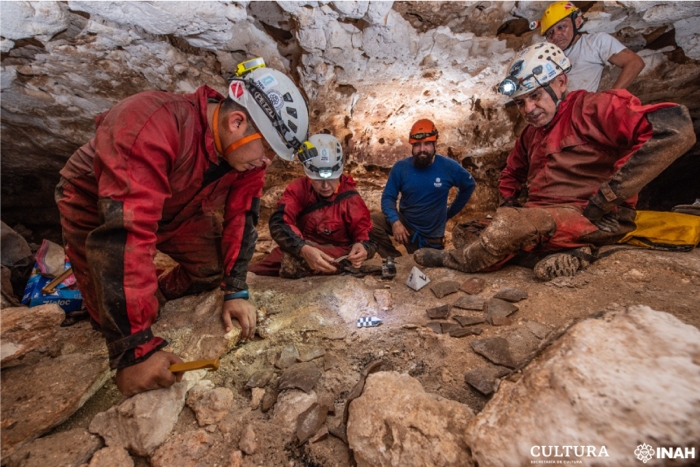 Researchers in the underground site. (Yucatán Peninsula Office of SAS-INAH)

In addition to the canoe, recent explorations of the San Andrés site's water bodies have revealed a number of other finds, including skeletal remains, a mural painted on the walls of cavern, a rocky monument called a stele, broken pottery fragments, and a ritual knife.

"It is evident that this is an area where ceremonies were held, not only because of the intentionally fragmented pottery, but also because of the remains of charcoal that indicate their exposure to fire," the researchers say.