Astronomers Just Discovered The Smallest Star Ever Known to Science

Scientists have reported the discovery of the smallest star ever found, detecting a star only slightly larger than Saturn some 600 light-years away from Earth.

The star, called EBLM J0555–57Ab, is part of a binary system – as it orbits another, much larger star – and the researchers say its extremely diminutive state means it only just qualifies as a star at all, being about as minuscule as stars can possibly become.

"Our discovery reveals how small stars can be," says one of the researchers, astronomer Alexander Boetticher from the University of Cambridge in the UK.

"Had this star formed with only a slightly lower mass, the fusion reaction of hydrogen in its core could not be sustained, and the star would instead have transformed into a brown dwarf."

For this reason, brown dwarfs are often called failed stars, but despite its miniature proportions, EBLM J0555–57Ab maintains just enough mass to enable the fusion of hydrogen into helium in its core. 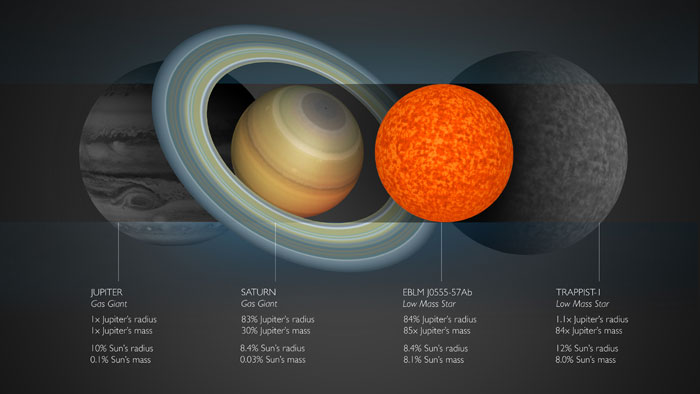 Combined with its proximity to its much brighter and larger parent star – EBLM J0555–57A – that made finding the planet-sized pipsqueak something of a challenge.

"It's like trying to look at a candle beside a lighthouse," one of the team, Amaury Triaud, told Nicole Mortillaro at CBC News.

In fact, before the team realised what they were looking at, EBLM J0555–57Ab wasn't suspected of being a star at all, after it was detected passing in front of the larger star that it orbits.

That process is how astronomers usually find exoplanets, as the dip in light when planets block a portion of a distant star's sunshine tells us that there's something in the way.

The same technique is how EBLM J0555–57Ab was found, but it took further measurements to ascertain the object's true identity.

"Indeed, until we measured the mass it looked just like a transiting planet," Triaud explained to John Wenz at Popular Mechanics.

Subsequent analysis by researchers working on the Wide Angle Search for Planets (WASP) experiment showed that the tiny star has a mass comparable to the estimated mass of the much publicised TRAPPIST–1 discovered earlier in the year, but with a radius around 30 percent smaller.

Small, dim, and therefore cool stars like these are considered optimal candidates for hosting worlds that might support life, as the stars' relative mildness could increase the likelihood of planets retaining liquid water on their surface.

But while such tiny stars with less than 20 percent the mass of our Sun are actually thought to be the most common stars in the Universe, there's still a lot we don't understand about them – largely because they're so hard to find out there in all the inky blackness when outshone by so many brighter stars.

Now that we've found this record-setter at least, it could help us learn more about these not-so-great balls of fire – and who knows how much more amazing science that could turn up?

"We're trying to replicate fusion on Earth in labs, but that's basically as small as it gets in nature."

The findings will be published in an upcoming edition of Astronomy & Astrophysics.