A recently discovered object sharing Earth's orbital path around the Sun could actually be a trojan asteroid, astronomers have found.

If confirmed, it will be only the second object of its type identified to date, suggesting that there could be more of these hidden asteroids lurking in Earth's gravitational pockets.

Trojan asteroids are space rocks that share the orbital path of larger planetary bodies in the Solar System, hanging out in gravitationally stable regions known as Lagrangian points.

These are pockets where the gravitational pulls of the planet and the Sun balance perfectly with the centripetal force of any small body in that region to basically hold it in place.

These are really quite useful, actually – we can put spacecraft in them and be reasonably confident they will stay put. The James Webb Space Telescope, for instance, will be going in the Earth-Sun L2 Lagrangian. 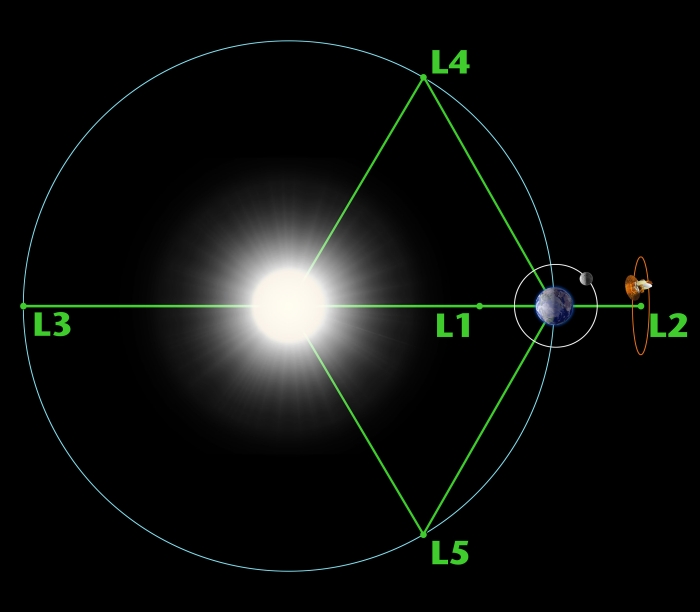 Lagrangians, however, can also capture space rocks, and the phenomenon is well-known in the Solar System.

Jupiter has the most trojans, with well over 9,000 documented, but the other planets are not going without. Neptune has 28, Mars has 9, and both Uranus and Earth have one confirmed apiece.

Earth's confirmed trojan, named 2010 TK7, is a chunk of rock around 300 metres (984 feet) across, hanging about the Earth-leading L4 Lagrangian in an oscillating tadpole-shaped orbit known as libration.

The new object, named 2020 XL5, which was first observed in November and December of last year, seems similar.

According to amateur astronomer Tony Dunn, who calculated the object's trajectory using NASA's JPL-Horizons software, it, too, librates around the Earth-Sun L4 Lagrangian, looping close to the orbit of Mars, and intersecting the orbit of Venus.

In the gif below, the asteroid's orbit is in teal, with Earth in blue and Mars in orange. Venus and Mercury are both white.

Earth has one known Trojan asteroid, 2010 TK7. But newly-discovered 2020 XL5 is a good candidate as it librates around Earth's L4 point, and will continue to do so for thousands of years. pic.twitter.com/mXUyFIIOSw

Because it draws so near to Venus, if 2020 XL5 is a trojan, it may not be stable on long timescales. According to simulations run by Dunn, for a few thousand years, the asteroid will pass above and below the orbital plane of Venus when it intersects, keeping the planet from disrupting its orbit.

Eventually, however, gravitational interactions should move it away from the L4 point. This is supported by simulations run by amateur astronomer Aldo Vitagliano, creator of the Solex and Exorb orbital determination software.

"I can confirm that 2020 XL5 is presently a moderately stable Earth  Trojan (I mean stable on a time scale of 2-4 millennia)," he wrote on the Minor Planets Mailing List.

"I have downloaded the nominal elements and their covariance matrix from the Neodys site, thereby generating 200 clones of the body. All the 200 clones, integrated up to AD 4500, although becoming spread over an orbital arc of more than 120 degrees, keep librating around  the L4 point. The first clone jumps over the L3 point around year 4500, and by year 6000 many of them have done the jump and a few of them are librating around the L5 point."

2010 TK7 isn't necessarily stable in its current position long-term, either. A 2012 analysis found that it only became a trojan around 1,800 years ago, and will likely move away from the L4 point in about 15,000 years, into a horseshoe-shaped orbit, or into L5.

Although only one more data point, 2020 XL5 could help us figure out how to search for other potential Earth trojans. We have done so – both the OSIRIS-REx and Hayabusa2 spacecraft scanned the L4 and L5 points respectively in 2017 while en route to their respective targets, but found nothing. Searches from Earth have been nearly as fruitless.

That is not necessarily surprising. Any objects inhabiting the Lagrangians would be moving around a lot, leaving a very large patch of sky to scour looking for relatively small objects. From Earth, also, the placement with respect to the Sun makes detection challenging.

Scientists have ruled out a stable population of primordial trojans hiding since the beginning of the Solar System.

Nevertheless, even with current observational limitations, scientists have estimated that we could be able to detect hundreds of Earth trojans comparable in size to 2010 TK7. Gaining a better idea of how they move around the Lagrangians could help us narrow down where in the sky to look.