An unusual cache of at least 13 wooden coffins dating back to 2,500 years ago has been discovered in the desert necropolis of Saqqara in Egypt.

What makes these coffins so special among the thousands interred in the tomb complex is the fact they have remained intact for millennia, and are still completely sealed - hundreds of years after their inhabitants died.

According to Egypt's recently minted Ministry of Tourism and Antiquities, the coffins were found in a burial shaft 11 metres (36 feet) below the ground, stacked on top of each other. They're so well preserved, even some of the colours painted on the wood are still intact. An initial analysis has found that the coffins have likely been sealed since they were buried.

Inside the burial shaft, three sealed niches were also found. Minister Khaled Al-Anani said that it's likely there are more coffins in the shaft yet to be discovered. 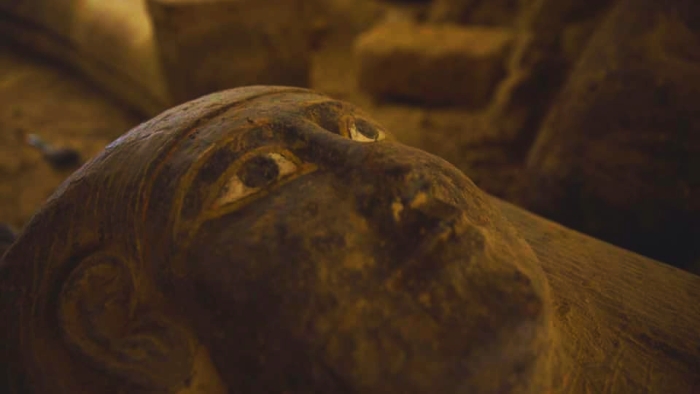 Saqqara is believed to have served as the necropolis for Memphis, once the capital of ancient Egypt. For 3,000 years, the Egyptians interred their dead there; as such, it's become a site of much archaeological interest.

It's not just the high-ranking nobility and officials buried there, with their grave goods, their cartouches, their mummified animals, and their richly appointed tombs. Those are more likely to be found, since their interment was more elaborate - but recent excavations have turned up simpler burials, likely of people from the middle or working class.

Even the rich burials are not immune to outside influences. Over the millennia, many such tombs have been looted. So finding a cache of coffins that have been undisturbed and unopened for all that time means the possibility of untouched grave goods inside. 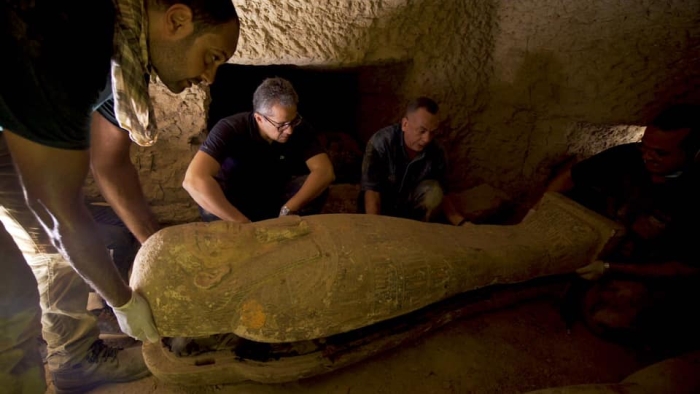 Given that the coffins are made of wood, and were buried in a dry location, the possibility of any eerie liquid preserved within is probably quite low.

The potential grave goods, however, could not only tell us who was buried, but how important they were. The discovery is likely to add to our ever-growing understanding of ancient Egyptian funerary customs.

The names and identities of the people buried in the coffins are yet to be discovered. But, as excavation work at the site continues, this information is expected to be found soon, as well as the total number of coffins buried in the shaft.

Meanwhile, the Ministry is set to release a series of promotional videos on the discovery - the first adventure-themed promo you can watch above features Indiana Jones-esque music, complete with a cliffhanger about a future announcement.

Egypt reopened cultural tourism to museums and archaeological sites on 1 September, so we can probably expect more announcements from the Ministry in the coming days and weeks, as the government works to renew tourist interest in visiting Egypt's antiquities.