It's always disheartening when the science news corner of the internet gets overwhelmed by something that's not even remotely science.

Over the weekend, the UK tabloid The Daily Star published an "exclusive" claiming that four astronauts - including Buzz Aldrin - allegedly passed lie detector tests while talking about their claims of encountering aliens.

We're not going to link to it, but here's a screenshot of the article opener: 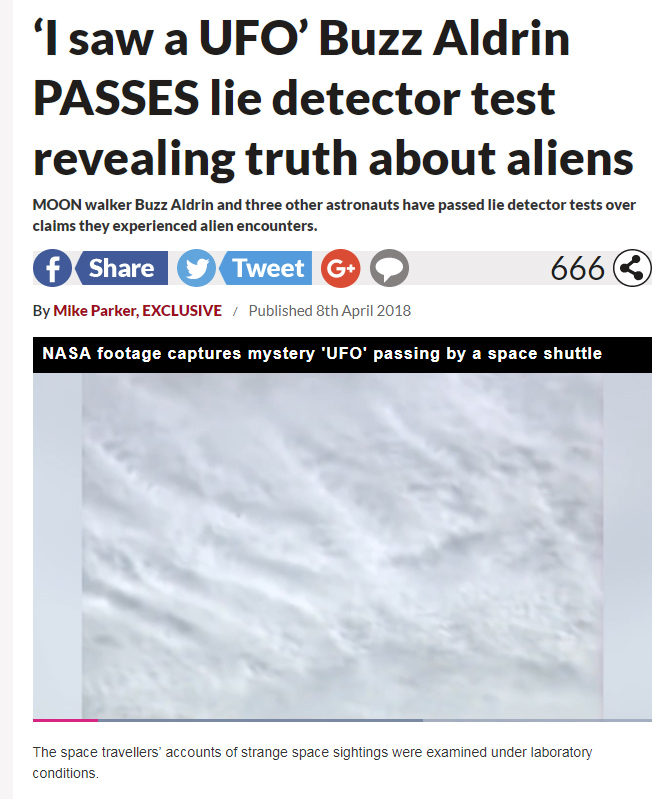 In less than 24 hours, this bizarre piece of news (?) was running amok on the internet, earning a prominent spot in the Science section on Google News. 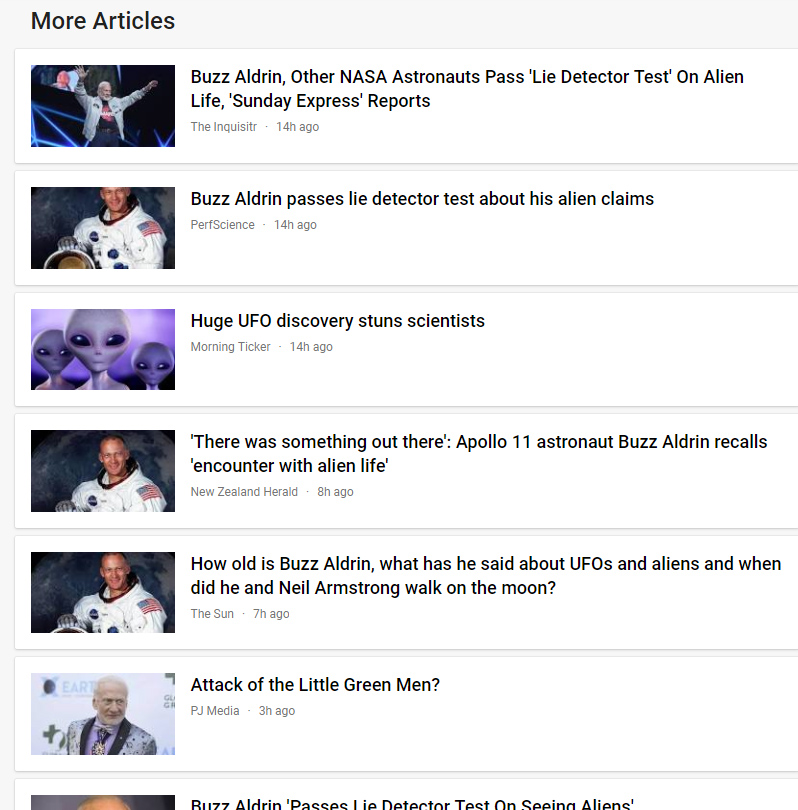 According to The Daily Star, there's an institute in Albany, Ohio that's conducted a study on four NASA astronauts, including Buzz Aldrin.

Apparently the results of their voice analysis - which doesn't seem to be published anywhere and probably has not passed peer review - showed the men are all convinced that they've encountered signs of alien life during their space missions.

So, what kind of analysis are we talking about?

This piece of research allegedly comes from the Institute of BioAcoustic Biology and Sound Health, which claims to have tapped into the frequencies of one's voice "as a holographic representation of health and wellness."

According to the institute's website, "nothing is hidden from your own voice. You may be able to lie to your friends and deceive yourself with your words but the vocal frequencies do not lie."

Bioacoustics is a legitimate branch of science, largely concerned with investigating how animals produce various sounds. In this case, however, the institute's line of study bears the hallmarks of pseudoscience.

Okay, back to the astronauts and aliens. The article states that "Aldrin, Al Worden, Edgar Mitchell and Gordon Cooper all took part in the study."

That is, of course, impossible - Cooper, an astronaut on the NASA Mercury program, and Mitchell, who visited the Moon on the Apollo 14 mission, have passed away.

It's true that Worden, Mitchell and Cooper all have spoken about extraterrestrials and UFOs, especially Cooper, who claimed to have seen UFOs while he was still a military aircraft pilot in the 1950s.

But in the case of Aldrin, the rumours that he saw an alien craft during the Apollo 11 mission are complete nonsense, and have been debunked by Buzz himself on several occasions.

Here's what actually happened: when the first-ever Moon landing party was still en route, Aldrin saw a light outside the window.

The crew quickly concluded that it was sunlight reflecting off an adapter panel - one of four 'hatches' that enclosed the Lunar Module and were jettisoned once that stage of the rocket detached.

"It was not an alien. Extraordinary observations require extraordinary evidence. That's what Carl Sagan said," Aldrin responded in a Reddit AMA three years ago.

So no, Aldrin did not see a UFO on the way to the Moon, and no, he did not pass a lie detector test over these claims.

As Aldrin's representatives told Pedestrian over email, "This is bogus and we don't know where it came from."

We have also reached out to Buzz and will be sure to include his response if we hear back.

Meanwhile, how about the claim that voice analysis technology can determine if someone is telling the truth? As far as we can tell, the evidence on this kind of forensic analysis seems shaky.

"Although the technology is still top-secret, these studies are claimed to be more reliable than current lie detector tests and could soon replace those used by the FBI and police," writes The Daily Star.

Don't bet your money on that.