Do We Live in a Multiverse?

As far as we currently know, there is a single expanding blob of spacetime speckled with trillions of galaxies - that's our Universe. If there are others, we have no compelling evidence for their existence.

That said, theories of cosmology, quantum physics, and the very philosophy of science have a few problems that could be solved if our blob of 'everything' wasn't, well, everything.

That doesn't mean other universes must exist. But what if they do?

What is a universe?

It should be a simple question to answer. But different areas of science will have subtly different takes on what a universe even is.

Cosmologists might say it describes the total mass of stuff (and the space in between) that has been slowly expanding from a highly concentrated volume over the past 13.77 billion years, becoming increasingly disordered with age.

It now stretches 93 billion light years from edge to edge, at least based on all of the visible (and invisible) stuff we can detect in some way. Beyond that limit, there are either things we can't see, an infinite expanse of nothingness, or – in the unlikely scenario that all of space bends back around on itself – a round-trip back to the start across a hyperspherical universe.

If we're talking quantum physics, though, a universe might refer to all fields and their particles, and their combined influences over one another. As a general rule, a universe (like ours, at least) is a closed system, meaning it can't suddenly lose or gain a significant sum of energy.

Philosophically speaking, a universe might be a discrete set of fundamental laws that governs the behavior of everything we observe. A universe would be defined by its own rules that set its unique speed for light, tell particles how to push or pull, or space how it should expand.

What is a multiverse in cosmology?

A century of astronomical observations has told us a lot about the age, size, and evolution of galaxies, stars, matter and the four dimensions we sum up as spacetime.

One thing we know with great confidence is that everything we see now is expanding at an accelerating rate. This logically implies the Universe, at least the one we live in, used to be a lot smaller. 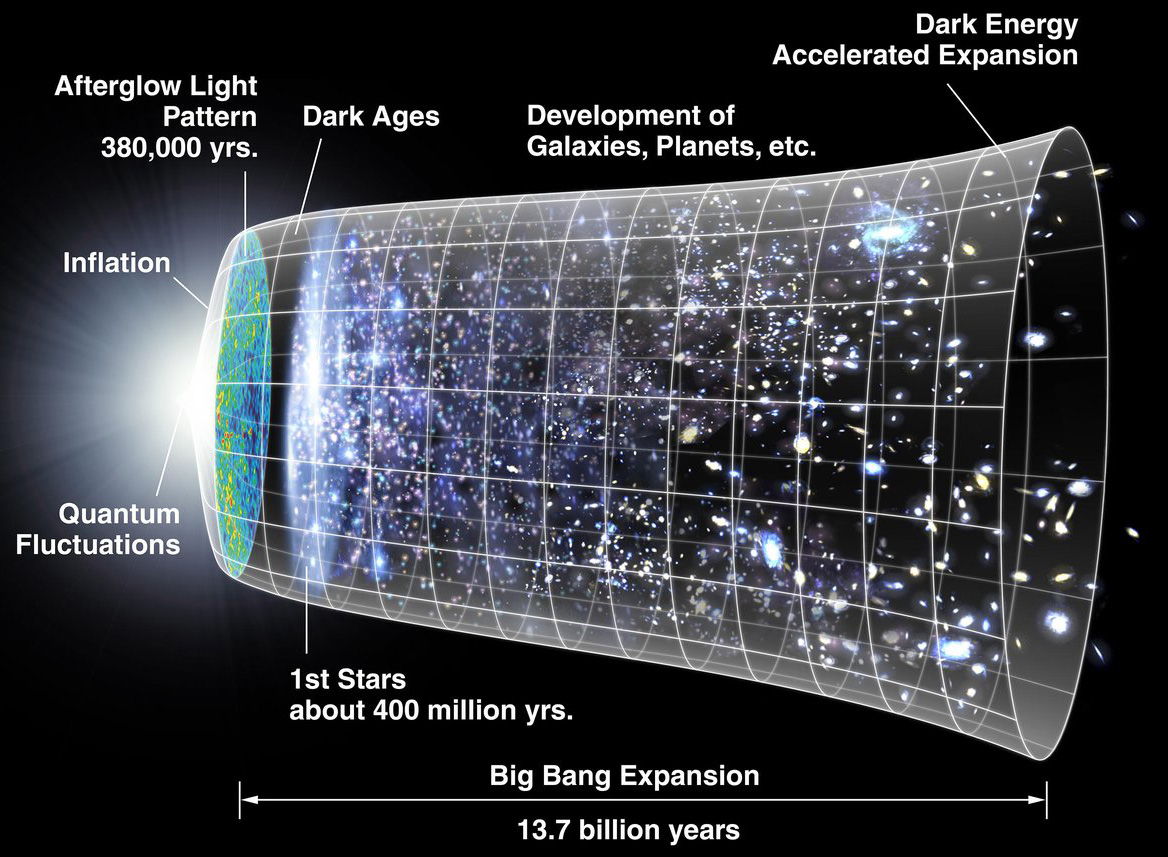 We can theoretically squeeze all of the matter of the Universe down to a point where the concentration of energy reduces atoms to a soup of simpler particles and forces combine until we can't tell them apart. Any smaller than that? Big shrugs.

If we go with what's known as a cyclic model of cosmology, the parent universe preceded ours in some way. It might even be a lot like this one, only running in reverse compared with ours, shrinking over time into a concentrated point only to bounce back out for some reason. Played out for eternity, we might imagine the respective universes bounce back and forth in an endless yo-yo effect of growing and collapsing.

Or, if we go with what's known as a conformal cyclic model, universes expand over trillions upon trillions of years until their cold, point-like particles are so spread out, for all mathematical purposes everything looks and acts like a brand new universe.

If you don't like those, there's a chance our Universe is a white hole – the hypothetical back end of a black hole from another universe. Which, logically, just might mean the black holes in our Universe could all be parents, pinching off new universes like cosmic amoebae.

What is a multiverse in quantum physics?

Early last century, physicists found theories that described matter as tiny objects only told half of the story. The other half was that matter behaved as if it also had characteristics of a wave.

Exactly what this dual nature of reality means is still a matter of debate, but from a mathematical perspective, that wave describes the rise and fall of a game of chance. Probability, you see, is built into the very machinery that makes up the gears of a universe like ours.

Of course, this isn't our daily experience as vast collections of atoms. When we send a bucket of molecules called a rocket to the Moon as it zooms past 300,000 kilometres away, we're not rolling dice. Classical old physics is as reliable as tomorrow's sunrise.

But the closer we zoom in on a region of space or time, the more we need to take into account the possible range of measurements we might find.

This randomness isn't the result of things we don't know – it's because the Universe itself is yet to make up its mind. There's nothing in quantum mechanics explaining this transition either, leaving us to imagine what it all means.

In his 1957 doctoral dissertation, American physicist Hugh Everett suggested the range of possibilities are all as real as one another, representing actual realities – separate universes, if you like – just like the one we're all familiar with.

What makes any one universe in this many worlds interpretation distinct is how each wave correlates with a specific measurement taken of other waves, a phenomenon we call entanglement.

What 'we' means, and why 'we' experience one entangled set over waves over another, isn't clear, and in some ways presents an even bigger problem to solve.

What is a multiverse in philosophy?

One of science's most fundamental starting assumptions is that in spite of what your mother tells you, you're not special. Nor is any other human, or our planet, or – by extension – our Universe.

While rare events occur from time to time, we don't answer The Big Questions with 'it just happened that way'.

So why does our Universe seem to have just the right tug-of-war of forces that allow not just particles to appear, but to congeal for long enough periods into atoms that can undergo complex chemistry to produce thinking minds like ours?

Philosophically speaking, the anthropic principle (or principles, since there are many different ways to spin the idea) suggests we might have it backwards. Without these conditions, no minds would have arisen to consider the amazing turn of events.

If just a single universe 'just happened that way' early one spring morning, it'd be one big coincidence. Too big really.

But if there were infinite universes, with infinite combinations of forces pushing and pulling, some would inevitably give rise to minds that just might ask 'are we part of a multiverse?'

Will we ever discover other universes?

Given the very definition of a universe relies on some kind of physical fence keeping influencing factors apart, it's hard to imagine ways we might ever observe the existence of a sibling for our universe. If we did, we might as well see it as an extension of our own Universe anyway.

That said, there could be some cheats that could give us a glimpse.

Any experiment to find one would have to rely on that 'fence' having some holes in it that allow particles or energy to leak across, either into ours, or away from it. Or, in the case of universes existing in our past, monumental events that left enough of a scar that not even a rebirth could erase.

For now, we still have no good reason to think our blob of everything is anything but unique. Given we're still learning how our own Universe works, the current gaps in physics could yet be plugged without any need to imagine a reality other than ours.

In countless other versions of this article scattered throughout the multiverse, however, the question of whether we are alone just might have a different answer.