The hypothetical, massive outer Solar System body Planet X is still proving elusive, but the hunt for it has yielded up a different find: a tiny dwarf planet, roughly 2.5 times Pluto's distance at the time it was found.

But we're pretty excited, because the Goblin is on an extraordinary orbit. According to the researchers, this still suggests that Planet X is somewhere out there, in the cold and dark.

It was found by astronomers Scott Sheppard of the Carnegie Institution for Science, and his colleagues Chad Trujillo of Northern Arizona University and David Tholen of the University of Hawaii. Together, this team is leading the search for Planet X.

When it was discovered, the Goblin was at around 80 astronomical units (AU, the distance between Earth and the Sun). For context, Pluto's distance is an average of 39.5 AU - although this varies a little because its orbit is elliptical, coming in as close as 29.7 at perihelion and going out as far as 49.3 AU at aphelion. 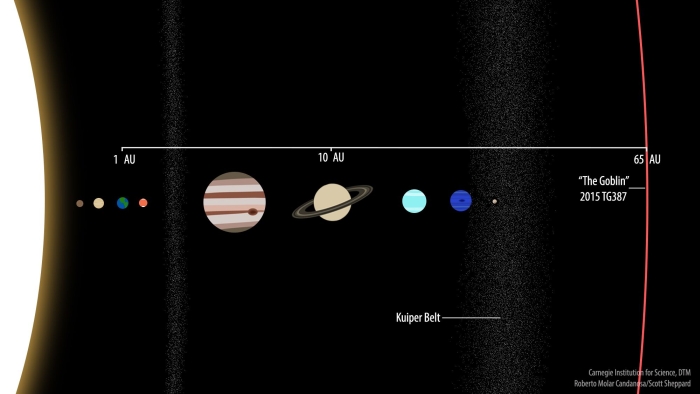 In fact, every planet (and dwarf planet) in our Solar System has an elliptical orbit, to varying degrees (none quite so elliptical as Pluto's). But the Goblin's orbit is jaw-dropping, according to several years' worth of observations to confirm the discovery and describe its orbit.

It comes in to 65 AU at its perihelion. This isn't the most distant perihelion - Oort Cloud objects 2012 VP113 and Sedna claim that honour at 80 and 76 AU respectively.

But the Goblin goes out farther - much, much farther - than either 2012 VP113 or Sedna, and indeed any other known Solar System object, except for some long-period comets. Based on its trajectory, its aphelion is 2,300 AU; Sedna, which set the previous record, has an aphelion of 937 AU.

The Goblin takes 40,000 years to go around the Sun just once.

Because these objects are so far away, they don't interact gravitationally with planets like Neptune or Jupiter.

"These so-called Inner Oort Cloud objects like 2015 TG387, 2012 VP113, and Sedna are isolated from most of the solar system's known mass, which makes them immensely interesting," Sheppard said.

"They can be used as probes to understand what is happening at the edge of our solar system."

So what's the Goblin telling us? According to Sheppard and colleagues, there's something out there. Something massive - up to 10 times the mass of Earth. Something tugging the orbits of these trans-Neptunian objects into elongated shapes with its immense gravity.

"These distant objects are like breadcrumbs leading us to Planet X," Sheppard said.

"The more of them we can find, the better we can understand the outer solar system and the possible planet that we think is shaping their orbits - a discovery that would redefine our knowledge of the Solar System's evolution."

Planet X was first hypothesised in 2014, when Sheppard and Trujillo, after discovering 2012 VP113, noticed the long, looping orbits of similar objects. They clustered together in a way that didn't seem random - but a huge planet way out beyond Pluto could have tugged them into the observed configuration.

Not everyone agrees that Planet X is out there. Earlier this year, a research team proposed an alternative explanation for those peculiar orbits; a bunch of rocks that had jostled each other into weird trajectories, like bumper cars.

Yet other researchers believe that there are "striking biases" in the detection of trans-Neptunian objects. In other words, the very data upon which the premise is based is flawed.

Whether or not it exists, the avid search for the hypothesised planet is certainly ponying up other goods. For instance, the discovery of 12 new Jovian moons, announced earlier this year, that tell us about a time during Jupiter's formation when the planet was still growing.

And, of course, now there's the Goblin. Which, according to computer simulations that include Planet X's size and orbit as per a paper published by Caltech's Mike Brown and Konstantin Batygin in 2016, could feasibly be shepherded by a giant planet.

"What makes this result really interesting is that Planet X seems to affect 2015 TG387 the same way as all the other extremely distant solar system objects," Trujillo said.

"These simulations do not prove that there's another massive planet in our solar system, but they are further evidence that something big could be out there."

The team's paper has been submitted to The Astronomical Journal, where it awaits peer review. You can read it in full on preprint resource arXiv.