As beautiful as Machu Picchu is, it's not the easiest place to get to, high up in the Andes with steep drops to the Urubamba River on three sides. Now researchers think they might know why the site was chosen.

The secret may lie deep below this iconic Incan city, in the faults where tectonic plates meet. These faults produced an abundance of stone over millions of years, eventually giving the Incas the building materials they needed.

Some of the stonework that makes up the buildings and temples at Machu Picchu is so well put together than there are no gaps at all in the joins, even without mortar. Producing these stones would've required less time and energy because of where the site is.

"Machu Picchu's location is not a coincidence," says geologist Rualdo Menegat, from the Federal University of Rio Grande do Sul in Brazil. "It would be impossible to build such a site in the high mountains if the substrate was not fractured."

Mixing data taken from satellite imagery and field measurements gathered on the ground, Menegat and his colleagues mapped out the fractures beneath the ancient Inca citadel. Some of the faults the researchers identified stretch up to 175 kilometres (109 miles) in length.

It's quite literally a case of X marks the spot for Machu Picchu – with the X being the meeting point of fractures running northeast-southwest and northwest-southeast. Other Incan cities, including Ollantaytambo, Pisac, and Cusco, are located at similar intersections, according to the researchers.

Even the buildings and the stairs of the Machu Picchu city reflect the faults underneath them to some extent.

And it's not just an abundance of building materials that would have drawn the Incas to the site of Machu Picchu, up on its 2,430-metre (7,973-foot) mountain ridge. The same fractures that provided stone also make for excellent drains.

That would've helped citizens avoid disastrous flooding during the heavy rainstorms that can happen in the region, and is likely to be one of the reasons why the Machu Picchu site is so well preserved today – still standing to accommodate more than 1.5 million visitors a  year. 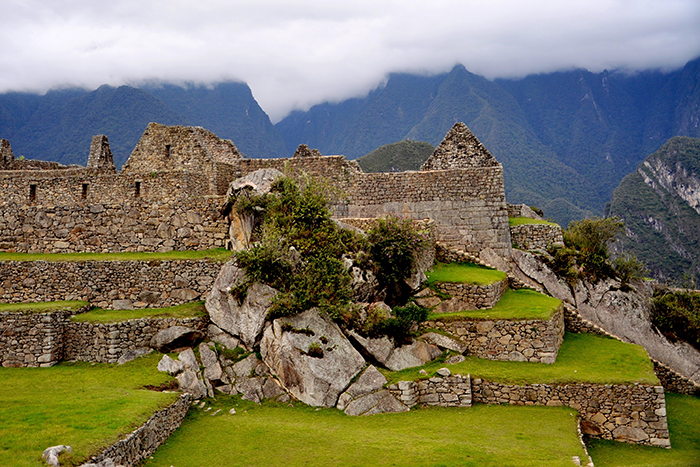 There remains a lot we don't know about the Inca people, including the origins of the civilisation that expanded across South America between the 13th and 16th centuries. What we do know is that they were master builders – just like several other old civilisations, including the Egyptians, they could probably teach us a lot about construction even today.

Now, the underlying geology of the area may have given us some hints about why Machu Picchu is where it is – and the Incas could hardly have picked a more breathtaking vista.

"Machu Picchu clearly shows us that the Incan civilisation was an empire of fractured rocks," says Menegat.

The research was presented at the annual meeting of the Geological Society of America.