As advanced and efficient as our solar panels are becoming, they're still pretty much useless when rain clouds arrive overhead. That could soon change thanks to a hybrid cell that can harvest energy from both sunlight and raindrops.

The key part of the system is a triboelectric nanogenerator or TENG, a device which creates electric charge from the friction of two materials rubbing together, as with static electricity – it's all about the shifting of electrons.

TENGs can draw power from car tyres hitting the road, clothing materials rubbing up against each other, or in this case the rolling motion of raindrops across a solar panel. The end result revealed by scientists from Soochow University in China is a cell that works come rain or shine.

"Our studies demonstrate a new concept in [the] utilisation of energy during various weather conditions," write the researchers in their published paper.

While the idea of using TENGs like this isn't completely new, the challenge has been to develop a system that wasn't too complex or bulky. Here two polymer layers were used to form a TENG on top of a photovoltaic cell. 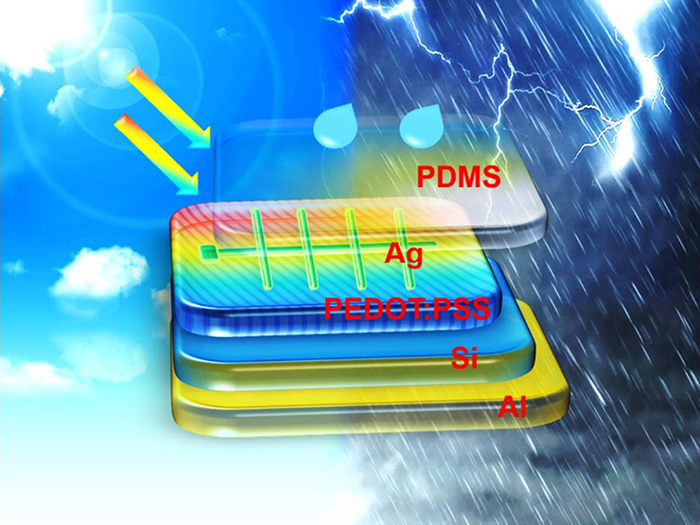 Using the imprints from standard DVDs – the same as you might use to watch Hollywood blockbusters at home – the researchers added grooves to one polymer to improve its energy-gathering efficiency.

In tests, the textured polymer layers acted as a mutual electrode for both the TENG and the underlying solar panel, conducting energy between the two devices when raindrops hit and bring the layers into contact.

As we mentioned earlier, scientists have been working on this idea for a while. Back in 2016 a team from the  Ocean University of China managed to generate electricity from raindrops falling on a solar panel through the addition of an extra graphene layer.

By separating the positively charged ions in salty rain, the scientists were able to get them binding to the graphene which then acted as a pseudocapacitor – essentially, two layers with different energy levels that then produced an electric current.

The main drawback, as in this new research, was in being able to generate enough electricity to make it work practically outside of the lab. Still, it feels like we're getting closer and closer to solar panels that don't necessarily need only solar input.

Best of all - it also rains at night. So one day we might get solar farms working around the clock regardless of the weather, adding another huge boost to the potential of renewable energy.

The findings have been published in ACS Nano.