If a Nuclear Bomb Explodes, These Are The Emergency Supplies You Should Have

North Korea on July 4 reportedly launched its first intercontinental ballistic missile - a rocket capable of travelling over 5,000 km (3,100 miles) with a weapon on top.

The feat suggests that the isolated country, which is one of nine nations that together wield more than 14,900 nukes, can strike Alaska.

However, the US faces a much different and more shadowy nuclear threat: a terrorist-initiated nuclear detonation, which is one of 15 disasters scenarios that the federal government has planned for - just in case.

"National Planning Scenario No. 1 is a 10-kiloton nuclear detonation in a modern US city," Brooke Buddemeier, a health physicist and expert on radiation at Lawrence Livermore National Laboratory, told Business Insider.

"A 10-kiloton nuclear detonation is equivalent to 5,000 Oklahoma City bombings. Though we call it 'low yield,' it's a pretty darn big explosion.

Buddemeier couldn't say how likely such an attack might be today. But the concern isn't unfounded, since weapons-grade nuclear materials have proliferated in recent years, along with smaller, kiloton-class bombs.

And while governments do their best to safeguard nuclear weapons materials, there's no guarantee a terrorist couldn't succeed in obtaining them.

Should a nuclear blast occur near your city or town, and you somehow avoided its skin-searing flash of light, crushing shockwaves, and incendiary fireball, take shelter immediately (read our full fallout survival guide here) and have a few items handy in your emergency kit.

"Would you have considered Oklahoma City a likely target?" he said. "I think it's worthwhile for everybody to think about preparedness for any kind of event."

Buddemeier recommends that you round up the emergency supplies recommended by Ready.gov (we've listed them at the end of this post).

"This isn't just for the nuclear holocaust event," Buddemeier said. "This is for general emergency preparedness, and making sure that you and your family can be safe in an emergency."

But if you're in a pinch for time or can't get to your kit, he said you should grab a few basics while you run for cover from radioactive fallout.

Why you should prepare to hunker down for 24-48 hours A fearsome aftereffect of nuclear blasts is fallout, which is a complex mixture of fission products (or radioisotopes) created by splitting atoms.

Many of these fission products decay rapidly and emit gamma radiation - an invisible yet highly energetic form of light. Too much exposure to this radiation in a short time can damage the body's cells and its ability to fix itself, leading to a condition called acute radiation sickness.

"It also affects the immune system and your ability to fight infections," Buddemeier said.

Only very dense and thick materials, like many feet of dirt or inches of lead, can reliably stop the gamma radiation emitted by fallout. It's also a threat you'd be foolish to attempt to escape by driving away in a car or other vehicle.

"[Y]our ability to know where the fallout's gonna go, and outrun it, are - well, it's very unlikely," he said, because it would be carried by high-altitude winds "often booking along at 100 miles [160 km] per hour."

While rushing to a fallout shelter within the first minutes after a blast, or migrating to a better one, you'll want a few things to get through the next 24 to 48 hours - when radioactive fallout exposure risk is the greatest.

The minimum your emergency kit should have

If a full emergency preparedness kit isn't handy - say, on public transit to or from work - Buddemeier recommends trying to grab a few items, just as long as it won't delay your taking shelter from fallout by more than a couple of minutes.

Item number-one: "A radio," he said, and ideally a hand-cranked type with a USB charging port, which can power other devices. "If you have a mobile phone, that will work too."

Buddemeier said he prefers a radio over a mobile phone because "sometimes the cell towers may be affected," either by power outages, crushing demand, or an invisible yet powerful effect of nuclear weapons, called electromagnetic pulse. (The effect can disable electronics, though a ground detonation would mostly confine EMP to the blast damage zone, where you'd have much bigger problems.)

He said a radio is important because you need to receive emergency broadcasts and instructions. It's one of the simplest ways to figure out where dangerous fallout has landed, when you can leave your shelter, and where the safest routes to exit a fallout zone are located. 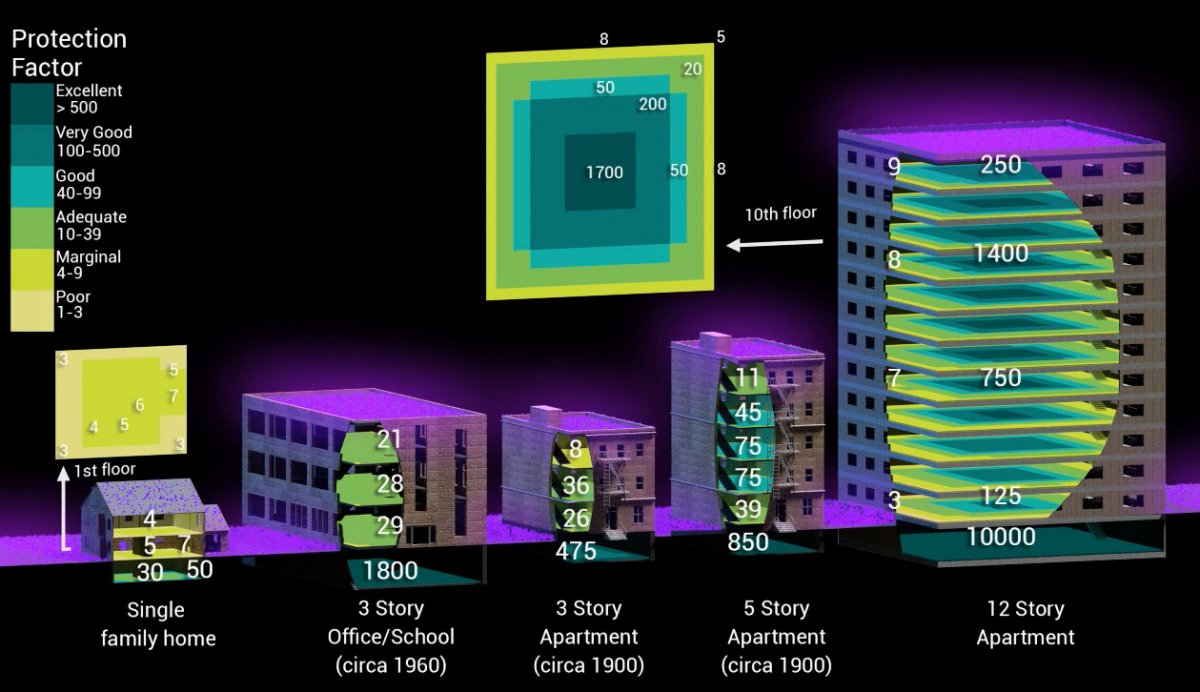 Second, Buddemeier says, you'll want water - ideally one gallon (3.8 litres) per person per day, according to Ready.gov. In addition to drinking it, you may need it to rinse off any radioactive fallout after removing your clothes, since this can drastically reduce your radiation exposure.

Third, Buddemeier said, "I would probably grab a breakfast bar or two to stave off the hunger a little bit." Fourth, he says to grab any essential medications or treatments you might need.

Buddemeier says there's a risk in trying to gather too much stuff, since the first minutes and hours after a blast are when radioactive fallout exposure risk is the greatest - especially outdoors.

One thing he definitely does not recommend stressing about immediately after a blast are potassium iodine pills, which aren't very useful in the first 48 hours after a blast.

"Most people seem to think of the potassium iodide, or KI pills, as some type of anti-radiation drug. They are not," Buddemeier said. "They are for preventing the uptake of radio-iodine, which is one radionuclide out of thousands of radionuclides that are out there."

"Radio-iodine is … probably like [0.2 percent] of the overall exposure that you may be facing if you're outdoors," he said, adding that the pills are most helpful for addressing longer-term concerns about food supply contamination.

"The most important thing is sheltering in place, and not trying to seek out things like KI [pills], because the act of trying to find your KI and get your KI may cause you to get a much higher exposure to everything else and offer very little protection in return."

Buddemeier says he hopes no one will ever have to act on his advice. But if people could find good shelters, he says - and are able to receive broadcast instructions from emergency personnel - the blow of a catastrophe could be softened.

"We may not be able to do much about the blast casualties, because where you were is where you were, and you can't really change that. But fallout casualties are entirely preventable," he said. "In a large city … knowing what to do after an event like this can literally save hundreds of thousands of people from radiation illness or fatalities."

It's smart to have a family plan as well as a few basic emergency kits to last several days, then stash them at home, work, and in your vehicles.

But the emergency supply lists below, published by the US Federal Emergency Management Agency, aren't just helpful for making it through the aftermath of a nuclear blast - they're also good for weathering tornadoes, hurricanes, snowstorms, power outages, and other take-shelter emergencies.

FEMA recommends each of your kits have these essential items in a portable bag:

If you have the space, the need, and the foresight, FEMA also recommends beefing up your basic kits with the following items:

You can access more information about how to prepare for a variety of emergency scenarios at FEMA.