On Saturday 11 May, researchers at the Mauna Loa Observatory in Hawaii marked a new notch on humanity's collective chart: Earth's atmospheric concentration of carbon dioxide had exceeded 415 parts per million, higher than it's been for millions of years. What a time to be alive.

Late last week, British newspaper The Guardian announced a style guide change. From now on, they will prioritise terms such as 'climate crisis or breakdown' and 'global heating' over the more common 'climate change' and 'global warming'.

The media outlet's language shift has already attracted both praise and accusations of scaremongering. But it was a bold move that had us at ScienceAlert rethinking the language we use in our own publication.

Before making any major shifts, I decided to talk to the people at the frontline of this debate - the scientists. Are we, as journalists, justified in calling it a climate crisis?

"How the media should talk about climate change is not a new debate," leading ecology researcher Jessica Hellmann, director of the University of Minnesota's Institute on the Environment, told ScienceAlert.

"For at least 25 years, climate scientists have criticised the press about their default approach to 'balanced' coverage of climate change, giving equal weight to peer-reviewed research and lesser-substantiated claims and critiques."

Hellmann notes this problem of false balance has lessened in recent years, and thinks that a wording change "is the next step in that evolution, toward better reflecting the consequences of climate change in the interest of the public."

If we seek wide-reaching instances of the 'climate crisis' label online, we need look no further than US politician Al Gore, whose 2008 TED talk "New thinking on the climate crisis" has been viewed more than 2 million times.

But it's not just activist language. Amongst scientists, the phrase 'climate crisis' is hardly new. Even a cursory glance at Google Scholar will reveal thousands of papers, book chapters, and other items that deem it to be a crisis, often in the title.

So, it appears that it's hardly a stretch to start bringing it up more prominently in media coverage, too.

"Concerning the specific term 'climate crisis', I think it strikes an appropriate balance of conveying urgency without hyperbole."

It didn't start out as a crisis

"Perhaps more than most other scientific facts, the evidence for climate change is based on statistical analyses of innumerable observations that are dispersed across time and space," Lewandowsky and his colleague Lorraine Whitmarsh wrote in a PLOS Biology paper last year.

Such scattered evidence and massive time scales make it a tricky subject to grasp, sure. Hence it's no wonder that when it comes to publicly communicating the results of climate change science, the language has morphed significantly over the past several decades.

"Scientists tend to speak in cautious language when describing their research, and to discuss implications of their research in terms of probabilities," states one 2007 paper on media coverage of climate change.

"For journalists and policy-makers, this is difficult to translate into the crisp, unequivocal commentary that is often valued in communications and decision-making."

It was roughly in the 1980s that the general public started paying attention to the "greenhouse effect", that most basic principle of atmospheric warming several scientists first outlined in… the mid-19th century. (Yes, we've known about the threat of rampant fossil fuel consumption for quite some time now, as a 1912 newspaper clipping from New Zealand readily attests.)

As temperatures started setting records in the late '80s, "global warming" entered public consciousness, and was quickly followed by "climate change" itself. After all, the very first report by The Intergovernmental Panel on Climate Change (IPCC) was published in 1990.

With public interest in climate change growing in the 2000s and early activism culminating with Gore's An Inconvenient Truth documentary, we also got increasing political polarisation on what we should be doing about this mess. Or whether we should be doing anything at all. Or if it's even real.

By this point, global warming and climate change had become largely interchangeable in the news media, even though they have distinct scientific meanings. That confusion has continued to persist - even some ScienceAlert readers have attempted to persuade us that the term "global warming" is now defunct.

The thing is, global warming sounds more threatening, more urgent - it sounds like there will be consequences.

Now-US President Donald Trump tweeted in 2013 that "they changed the name" from global warming to climate change because it "wasn't working"; but if anyone has an original claim to the idea of swapping around scientific terms in order to shift public opinion, it's actually the George W. Bush administration - and they changed it because it was working too well.

A 2002 memo to Bush, authored by political consultant Frank Luntz, famously suggested that "'climate change' is less frightening than 'global warming'", amidst recommendations to continue to cast doubt on the scientific consensus of climate science.

Let's be adults about it

As various governments have come and gone, the planetary processes we describe as climate change have continued to march on, and every new scientific report tallying their effects has increased in urgency.

"The language we use has lagged well behind the facts of climate science. The words we use frame the way we think about a problem," says philosopher Clive Hamilton, who has documented humanity's grappling with climate change in a series of books.

"For years, the faint-hearted have told us that we must not be 'alarmist' because if we frighten people then they will stop listening," he told ScienceAlert. "But we should treat the public as adults, and tell the truth."

Indeed, in some aspects we're way past musing whether 'global warming' sounds scary or not. For plenty of people, especially the younger generations, it's terrifying and they want to do something about it. From school strikes to support of policies that favour cutting carbon emissions, there is a renewed push for action.

"We need to alert the public to the magnitude of the problem without, however, conveying a sense of hopelessness," Stephan Lewandowsky told ScienceAlert. "The term 'crisis' serves this purpose well and is certainly more appropriate than the rather gormless 'climate change'."

Similarly, there is enough scientific basis to suggest the planet is not just warming any more.

"There's always the possibility of causing confusion, but 'global heating' instead of 'global warming' is a more accurate description of what is actually happening," says Jessica Hellmann.

Climate scientist Will Steffen, Councillor with the Climate Council of Australia, is another proponent of using stronger language around climate change - but also the actions we need to take.

"Another concept that is important to communicate is that decisions we make now on emission reductions are crucial for avoiding potentially catastrophic change later in the century. The term 'point of no return' might be useful here."

But through all these iterations of the language media has used - from greenhouse effect all the way to climate crisis - there remain those who are doubtful of the true extent of climate change, and those who deny its primary cause is human activity, and even those who deny the scientific facts altogether.

The Guardian's style guide update suggests calling such people "climate deniers" rather than skeptics to underline that it's not a matter of balancing opinions. We already use that kind of wording here at ScienceAlert: the facts of climate science are not under question, and we treat them as such.

However, you can only rebrand climate change to a "crisis" or "breakdown" or "emergency" if you know whom you are talking to, and whom you are trying to reach.

This lesson is crystal-clear to atmospheric scientist Katharine Hayhoe, who is one of the most influential climate change communicators in the world.

"[In] my opinion the science, coupled with our current carbon trajectory, which is upwards rather than downwards, does justify the term 'climate crisis'," she told ScienceAlert.

But she warns that such a framing is only "effective for those already concerned about climate change, but complacent regarding solutions, viewing it as a challenge for future generations but not for today." Hayhoe notes that this would likely characterise most readers of The Guardian.

"It is not yet effective, however, for those who already perceive those who advocate for climate action to be alarmist Chicken Littles. Rather, it would further reinforce their pre-conceived - and incorrect - notions."

So, here's what we've arrived at. There is plenty of evidence and expert opinion that the crisis label is not baseless alarmism - indeed, it has its place in how we communicate about climate change, and we can expect to see more crisis talk going forward. Even if some will continue to disagree.

That said, calling the impact of climate change a crisis can't replace the scientific terms we already use.

But if you're trying to get people to do something about the fire in their backyard, you call it an emergency.

With all that in mind, here are definitions for the climate science-related terms we will now be using at ScienceAlert: 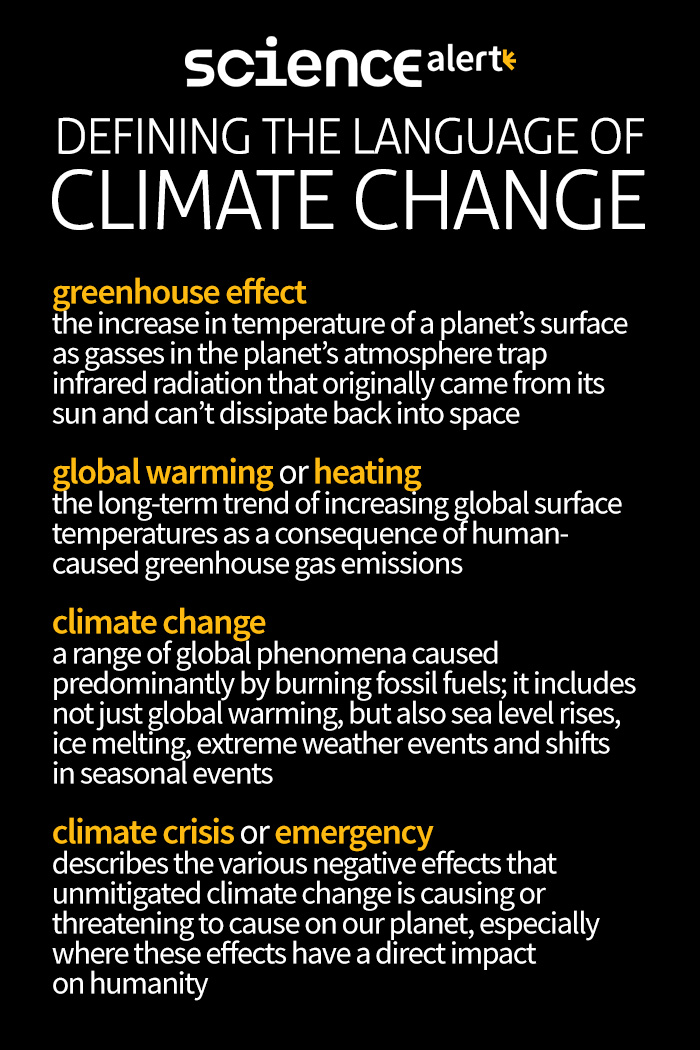 greenhouse effect: the increase in temperature of a planet's surface as gasses in the planet's atmosphere trap infrared radiation that originally came from its sun and can't dissipate back into space;

global warming (or heating): the long-term trend of increasing global surface temperatures as a consequence of human-caused greenhouse gas emissions;

climate crisis or emergency: describes the various negative effects that unmitigated climate change is causing or threatening to cause on our planet, especially where these effects have a direct impact on humanity.