A skull fragment discovered in a cave in Israel over a decade ago has now been dated using several different testing methods to an age of between 177,000 and 194,000 years old, setting a new record in world's oldest human fossil outside of Africa.

While DNA analysis on modern human populations has hinted that we've been swanning about outside of the African continent for as long as 220,000 years, the fossil adds fresh perspective on our first steps into the far corners of the globe.

Misliya Cave sits on the western slopes of Mt Carmel in the modern nation of Israel. Today the site is a mere rock overhang, but in the early 2000s researchers found evidence that the site was once a deeper cave occupied by a community of our ancestors. 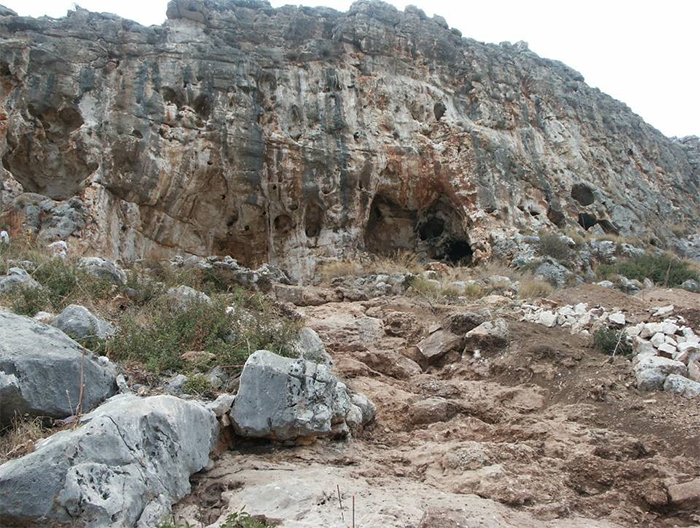 A number of animal and human remains, including a skull fragment and section of an upper jaw with teeth, have been dug from the sediment over the years, along with some flint artefacts.

The nature of the tools told a story of ancient migrants bringing in fresh technology, while other clues indicated the site was at least 100,000 to 160,000 years old, if not older.

Three different dating techniques have now been performed on the fossilised teeth and skull bone, confirming humans were at Misliya nearly 200,000 years ago.

Human ancestors of many different varieties have been wandering north for quite literally millions of years.

These bones are more or less indistinguishable from our own anatomy, however, meaning it's likely they represent a wave of humans that gave rise to modern populations.

Most past efforts to confidently pinpoint a time our more immediate ancestors have primarily come down to using art and artefacts, which had left us with a rather recent departure date of just over 40,000 years ago.

In 2007, researchers found a fossilised jaw and teeth of an anatomically modern human in China that smashed previous records by being dated to around 100,000 years.

Another more recent discovery in China was dated to around 80,000 years.

Our DNA also tells a story of an exit from Africa far earlier than we would have ever imagined.

The fossil from Misliya not only leaves them all dead in the water, the three different testing methods mean we can be pretty sure it's accurate.

"It provides the clearest evidence yet that our ancestors first migrated out of Africa much earlier than we previously believed," says anthropologist Rolf Quam from Binghamton University.

An exciting part of the discoveries is the growing pool of information that not only fills in details of a timeline, but a map of spreading human culture.

"It also means that modern humans were potentially meeting and interacting during a longer period of time with other archaic human groups, providing more opportunity for cultural and biological exchanges," says Quam.

Today there is just one global population of humans. In the past, humans separated by millennia through numerous migrations mixed together, blending cultures and genetics in unexpected ways.

Quam adds, "While all of the anatomical details in the Misliya fossil are fully consistent with modern humans, some features are also found in Neanderthals and other human groups."

It might feel like we're always pushing dates further back into history; last year the dating of a fossil pushed back the origins of anatomically modern humans in Africa by a whole 100,000 years.

Which of course comes with the territory – every milestone is set with the caveat that an older fossil could be lurking out there.

So pencil in the new number, but don't get too comfortable. There is still so much left to discover.