NASA's goal of getting humanity to Mars has been developing for years, but while the space agency has been busily building and testing its most powerful rocket – the Space Launch System (SLS) – it's fair to say we haven't heard a lot of specifics about how and when it would transport astronauts to the Red Planet.

That all changed this week, with NASA unveiling on Tuesday a bold multi-launch plan to establish its "Deep Space Gateway": a crewed spaceport orbiting the Moon, from which a series of missions could explore distant space, culminating in a crewed voyage to Mars in 2033.

It sounds a little like science fiction – in fact, it's pretty much NASA's version of Stargate without the wormholes – but the space agency is totally serious about getting started, with the first launch in the series, dubbed Exploration Mission 1 (EM–1), set to take place next year.

"We are ready to start putting pencils to paper and cutting hardware for these missions," NASA's chief of human spaceflight, Bill Gerstenmaier, told the agency's advisory council in a briefing this week.

At this stage, the first SLS test flight in EM–1 is expected to be crewless, but that could change closer to launch. NASA will then use the rocket to launch the Europa Clipper spacecraft into space to study Jupiter's moon.

After that, the SLS will be involved in a series of missions between 2023 and 2026, launching the components necessary to build the Deep Space Gateway.

Unlike the International Space Station (ISS), which orbits Earth and has a constant crew, the spaceport orbiting the Moon would be much smaller, and only host non-permanent crew when necessary for missions.

The Deepspace Gateway will consist of a power bus, a small habitat module, docking capability, an airlock, and modules for research purposes, with NASA saying the spaceport could be used for a number of research missions run by both space agencies and private space companies (such as SpaceX and Blue Origin).

"I envision different partners, both international and commercial, contributing to the Gateway and using it in a variety of ways with a system that can move to different orbits to enable a variety of missions," Gerstenmaier said in a statement.

"The Gateway could move to support robotic or partner missions to the surface of the moon, or to a high lunar orbit to support missions departing from the gateway to other destinations in the Solar System."

For use with the Deep Space Gateway, a reusable spacecraft dubbed the Deep Space Transport would enable crewed missions to deep space, including the Red Planet.

The craft is to be launched from 2027 onwards, and would act like a long-haul space taxi, transporting astronauts from the Deep Space Gateway to their destination, then returning the crew to the orbital spaceport, where it could be serviced in order for its next run. 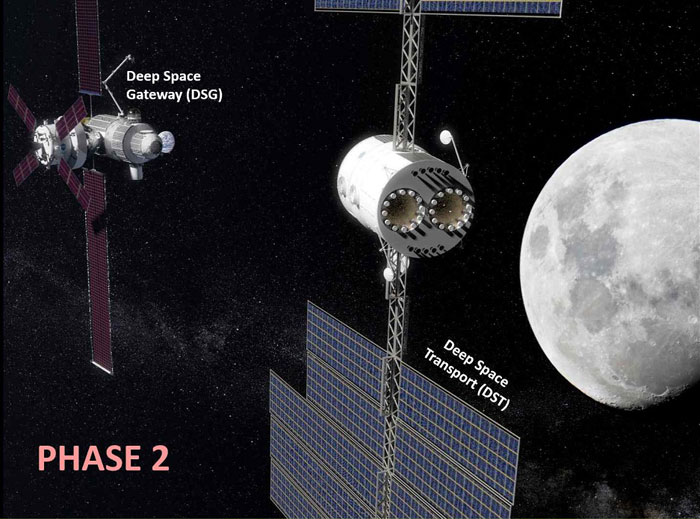 NASA anticipates a lunar mission in the late 2020s to serve as a testing ground for the spacecraft and spaceport, with a view to astronauts spending 300 to 400 days in space aboard the Deep Space Transport.

Then, the space agency hopes to use the system to transport a human crew to Mars in a 2033 mission – which at the moment is envisioned as an orbital voyage only, with the astronauts not landing on the Red Planet.

While the crew won't touch down, it would give human astronauts their first chance to see Mars up close – let alone travel so far in space. NASA says the mission, which could last for as long as three years, might also enable a Venus flyby.

Of course, all of this is conditional upon NASA securing sufficient funding to pull this off, but the US government has already signalled its intention this month that the space agency should make Mars a priority, while also trying to return astronauts to the Moon.

It's a huge undertaking, but the scientific payoff could be truly enormous, resulting in the first crewed exploration of another planet.