NASA is making plans to send a smart submarine to Saturn's moon, Titan, so it can autonomously explore the depths of its frigid oceans.

The tech blueprints of the autonomous submarine include a huge communications 'fin' on its back that would let it communicate directly with receivers on Earth, covering a distance of around 1,429 million kilometres (886 million miles).

The 6-metre-long (20-feet-long) sub would also use an interesting ballast system, taking on liquid when it wants to sink, and expelling it when it wants to rise. There won't be any tanks of fuel on Titan, so using as little energy as possible is going to be crucial. 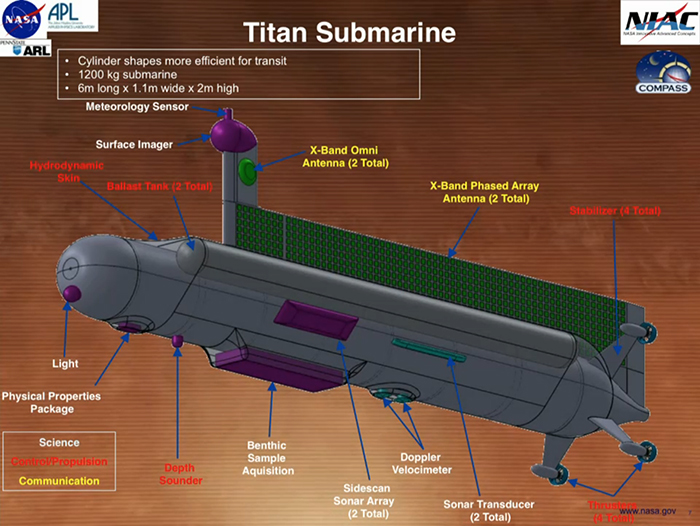 As you might expect, the submarine is going to be packed with all kinds of meteorological tools, including a range of sensors and radar and sonar equipment, plus cameras to build up the best picture possible of what it's actually like on Titan.

The moon might be incredibly cold, and covered with liquid methane and clouds of cyanide, but it's of interest to scientists because of the way it resembles an early Earth.

Other than Earth, it's the only known body in the Solar System with stable, liquid seas on its surface. Its atmosphere works in a similar way to our own, with comparable hydrological cycles to those on Earth that define how water moves between fresh and salt, or between liquid and ice.

One of the key benefits for using a submarine to explore Titan is the craft's versatility. On the surface it can measure waves, atmosphere, and wind, and once it dives, it can test the composition of the liquid it's moving through, and take samples from the sea bed.

"If you can get below the surface of the sea, and get all the way down to the bottom in certain areas, and actually touch the silt that's at the bottom, and sample it and learn what that's made of, it'll tell you so much about the environment that you're in," said one of the researchers, Michael Paul from Penn State University.

The sub design is on hold for now, until we see what else NASA's Cassini spacecraft can discover about Titan and its seas. The project is expected to be reassessed by March 2017.

This will involve analysing any new information the team has received from Cassini about the depths, pressures, and temperatures of Titan's oceans, and adapting their submarine design accordingly.

Once the design is finalised, it'll still be some time before the submarine is nosing its way through Titan's oceans - a first mission has been tentatively scheduled for 2038.

So even though we don't want to have to wait to see what comes of this fantastic voyage, it looks we're going to have to. But in the meantime, check out this cute animation of our new favourite sub below: