IT'S OFFICIAL: Gravitational Waves Were Just Detected With The Greatest Precision Ever

A massive international team made history in 2016 when they announced that, for the first time ever, they'd confirmed the existence of gravitational waves - ripples in the fabric of spacetime from the collision of two black holes.

Now gravitational wave astronomy has taken a leap forward with the detection of of a collision between two black holes using not two detectors, but three - vastly improving the accuracy, by a factor of about 10, with which astronomers can pinpoint the source of the waves.

It's the first observation taken using three detectors, and the first for the updated Advanced Virgo detector in Italy, in collaboration with LIGO's two detectors in Livingston, Louisiana, and Hanford, Washington, both in the US.

The first detected ripples in the fabric of spacetime were gravitational shockwaves caused by two black holes colliding. It was a huge deal - confirmation of the last remaining major prediction by Einstein in his theory of general relativity.

Just as radio telescopy was able to detect objects and events in the universe invisible to optical telescopes, gravitational wave astronomy is becoming a new way to discover things we didn't even know existed.

Advanced Virgo joined LIGO for an observation run on 1 August, its first time observing. The detection was made on 14 August.

It also marks the first time that scientists have been able to measure the polarisation of the gravitational waves, or the way they distort spacetime in three dimensions.

"As we increase the number of observatories in the international gravitational wave network, we not only improve the source location, but we also recover improved polarisation information that provides better information on the orientation of the orbiting objects as well as enabling new tests of Einstein's theory," said Fred Raab of LIGO.

While this is a fantastic achievement for everyone involved, based on rumours that were circulating in August we were expecting the merger to be between neutron stars, but that might be a little more difficult to detect.

Neutron stars are one of the things that can happen at the end of a life-cycle of a supermassive star. The core collapses, squeezing the protons and electrons into neutrons and neutrinos. The neutrinos escape, but the neutrons are incredibly densely packed into a core between just 10 and 20 kilometres (6-12 miles) in diameter.

If this core is less than about three stellar masses, the pressure of this density supports the neutron star. If the core is any larger, it collapses into a black hole.

Because black holes absorb light, they can't be observed directly. We infer their existence based on the reaction of space around them.

Neutron stars, on the other hand, are highly energetic, emitting immense amounts of light. This means that if we were looking at the right place at the right time, we could get real optical evidence of a gravitational wave source.

We could actually see what it looks like when those shockwaves propagate through the universe.

The kicker is that they are much smaller than the black hole collisions previously detected by our Earth-based interferometer - around 10-20 percent of the mass. This means they will be much, much harder to detect.

In fact, we may have to wait until the Laser Interferometer Space Antenna, or LISA, comes online in 2034, a space-based interferometer that will be at least five times more accurate than LIGO, based on the performance of pathfinder technology.

In the meantime, Virgo and LIGO are planning to continue their collaboration, with the next observation run scheduled to commence in the third quarter of 2018. And we're sure they will find more exciting stuff then.

Below is our live blog with updates from the press announcement of this discovery:

12:15pm EST: It's 15 minutes to go until the announcement starts! Anyone else super-excited? We're super-excited despite the fact it's past 2am here in Sydney, Australia. While we're waiting for the press conference to kick off, here's some more background on why a gravitational wave detection from neutron stars would be such a big deal.

Since its first 2016 announcement, LIGO made two more detections from black hole collisions. Then earlier this year, LIGO and another gravitational wave detector, VIRGO, took observations together, allowing for more precise signal triangulation.

12:32pm EST: Actually, we're still waiting for the livestream to start. We hope they haven't forgotten about us!

12:37pm EST: Still no livestream, but this press release just went live on the LIGO website.

12:43pm EST: The event is named GW 170814, after the date it was detected. It's the first detection made using three detectors - two of LIGO's, and one Virgo detector. 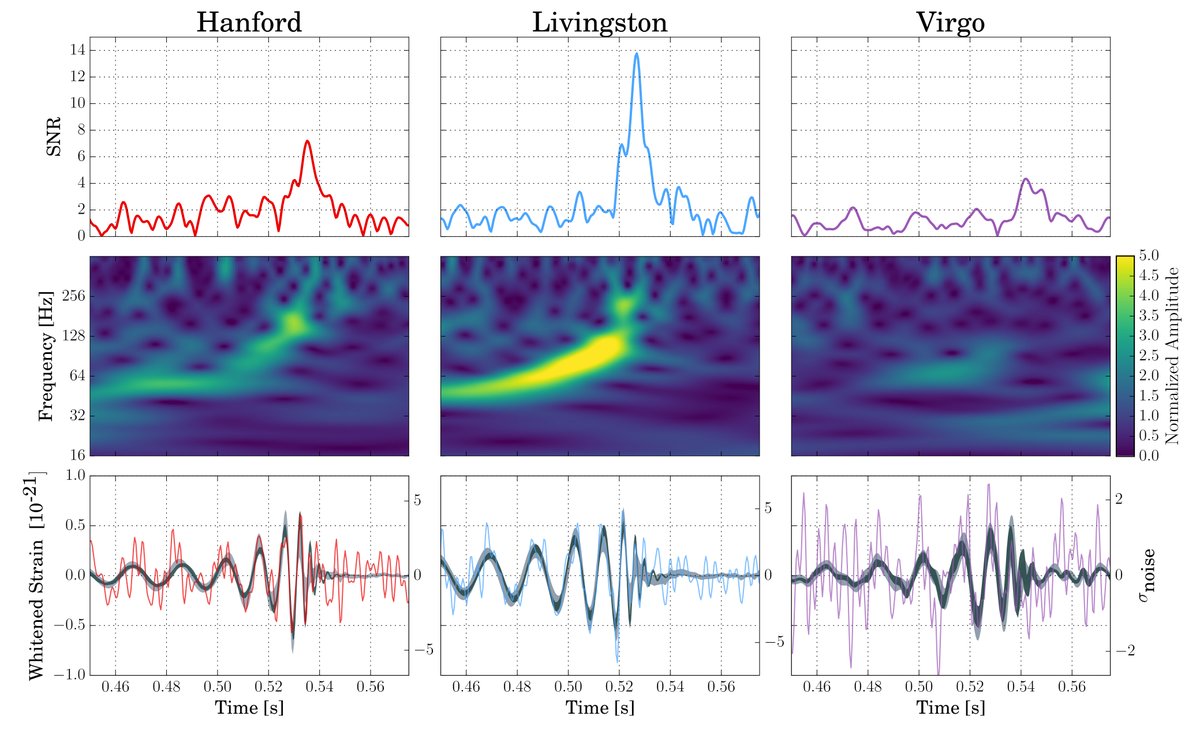 Here's a look at the data from this three-point detection.

Jo van den Brand: #GW170814 has been traveling for almost 2 billion years. Comes from the merger of 2 #BlackHoles.

Virgo is aligned slightly differently to the two LIGO detectors. This difference has allowed the team to access something called the polarisation of gravitational waves, which is the distortion of spacetime in the three spatial dimensions.

GW 170814's polarisation was consistent with Einstein's theory of general relativity, and this is the first time we've been able to make that confirmation.

12:57pm EST: The next observing run will commence in about a year from now.

"The future is incredibly bright for Virgo, for LIGO, for the Virgo-LIGO network, for gravitational wave astronomy, and for the greater astronomical environment which we can now do in common with gravitational waves and electromagnetic radiation."

"As with Galileo, humankind has a new instrument with which to look towards the skies. Every time we use a new instrument, there is a new prospect for knowledge, and we provide knowledge, knowledge that can serve as inspiration for the imagination and intuition of the young, and can bring about change in thousands of minds, and therefore science as a whole."

1:06pm EST: This image shows how much better simply adding one more detector improves the location of the source of gravitational waves: The broad streaks show the area to which previous collisions were pinpointed. The small green blob in the bottom left is where GW 170814 originated. Amazing!

1:08pm EST: While we wait, here's a little bit more information on the actual collision:

"The detected gravitational waves - ripples in space and time - were emitted during the final moments of the merger of two black holes with masses about 31 and 25 times the mass of the sun and located about 1.8 billion light-years away.

"The newly produced spinning black hole has about 53 times the mass of our sun, which means that about 3 solar masses were converted into gravitational-wave energy during the coalescence."

1:09pm EST: And the livestream has ended before we had a chance to listen to question time.

We have to admit, we're a little disappointed that we didn't actually get to see a collision between two neutron stars, but this news is still incredibly exciting.

With Virgo and LIGO working together, Shoemaker says, we may be able to make detections like this as often as once a week!