A newly discovered asteroid has the second-shortest orbit that we know in the entire Solar System, pipped only by Mercury.

It's named 2021 PH27, and it takes just 113 days to complete a circuit around the Sun, on an unstable elliptical orbit that crosses the orbital paths of both Venus and Mercury.

This means that it comes extremely close to the Sun at its closest approach, or perihelion, skimming close enough to reach scorching temperatures up to 480 degrees Celsius (900 Fahrenheit).

It also means that the asteroid's time is limited: within a million years, it will either be flung off its current trajectory, or it will be annihilated in a collision with one of the two planets or the Sun.

Although its lifespan – at least in its current orbit – is short, at least on cosmic timescales, 2021 PH27 and other inner Solar System objects can reveal information about the evolution of our planetary system. 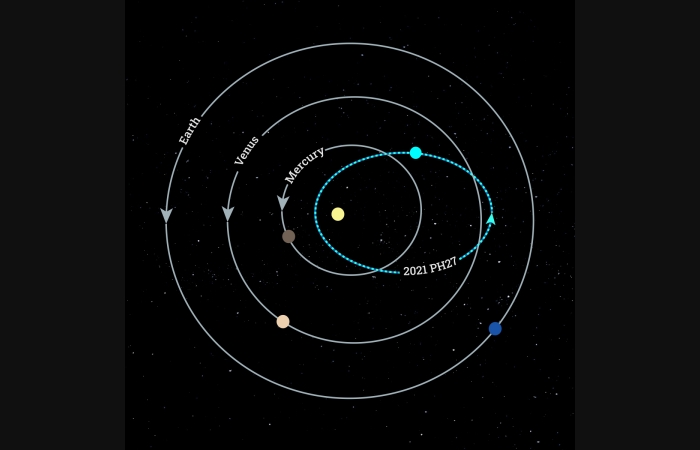 The orbital path of 2021 PH27. (Katherine Cain and Scott Sheppard/Carnegie Institution for Science)

That is, if we can figure out where it came from.

"Most likely 2021 PH27 was dislodged from the Main Asteroid Belt between Jupiter and Mars and the gravity of the inner planets shaped its orbit into its current configuration," said astronomer Scott Sheppard of the Carnegie Institution for Science.

"Although, based on its large angle of inclination of 32 degrees, it is possible that 2021 PH27 is an extinct comet from the outer Solar System that ventured too close to one of the planets as the path of its voyage brought it into proximity with the inner Solar System."

Spotting asteroids inside Earth's orbit – known as Atira asteroids when their orbits are entirely contained within Earth's – are usually very hard to see, since they tend to be very close to the Sun in the sky.

This means that the best time for spotting them is just before sunrise, or just after sunset – when the asteroid is illuminated by the Sun, but not outshone by it.

This is how astronomers Ian Dell'Antonio and Shenming Fu of Brown University imaged 2021 PH27, on 13 August 2021, using the National Science Foundation's Blanco 4-meter telescope in Chile.

In their observations, taken just after sunset, Sheppard found the asteroid. David Tholen of the University of Hawai'i, who frequently collaborates with Sheppard, then used those images to calculate where the asteroid would be the following evening.

"Because the object was already in the Sun's glare and moving more toward it, it was imperative that we determine the object's orbit before it was lost behind our central star," Tholen said.

"I surmised that for an asteroid this size to remain hidden for so long, it must have an orbit that keeps it so near to the Sun that it is difficult to detect from Earth's position."

The data obtained over the following two nights allowed the researchers to calculate a precise orbit and learn a few things about 2021 PH27.

We know, for instance, that its size is roughly 1 kilometer (0.62 miles) across. We also know that, because it flies so close to the Sun, it experiences very strongly the effects of its gravitational field as described by General Relativity – in particular, the rotation of its orbit, a phenomenon known as apsidal precession.

Prior to the discovery of 2021 PH27, Mercury had the strongest apsidal precession in the Solar System; but, although Mercury's orbital period is shorter – just 88 days – its orbit is much more round, which means it doesn't approach anywhere nearly as close to the Sun as the asteroid.

2021 PH27 is about to swing around behind the Sun, which means we won't be able to get another look at it until early next year. At that point, the researchers hope to take more observations that will help refine its orbit even further, which in turn will reveal more detail about where the asteroid came from, and what its future might hold.