New evidence has revealed that the closest Sun-like star outside our solar system is orbited by four approximately Earth-sized exoplanets, and researchers think that two of these worlds might be habitable.

Tau Ceti is located just 12 light-years away from you and me, and it's nearness and brightness has long made it a mainstay in sci-fi and video games – but now it looks like the star's potential to support alien life may not just be the stuff of fantasy.

Researchers led by Fabo Feng from the University of Hertfordshire in the UK detected the four exoplanets by registering extremely slight wobbles in Tau Ceti's movement, due to the gravitational pull of smaller astronomical bodies.

New advances in this technique, which is called Doppler spectroscopy (aka radial velocity or 'the wobble method'), revealed the presence of four worlds tugging on Tau Ceti as they orbited it, detecting variations in the movement of the star as low as 30 cm/s (about 12 inches per second). 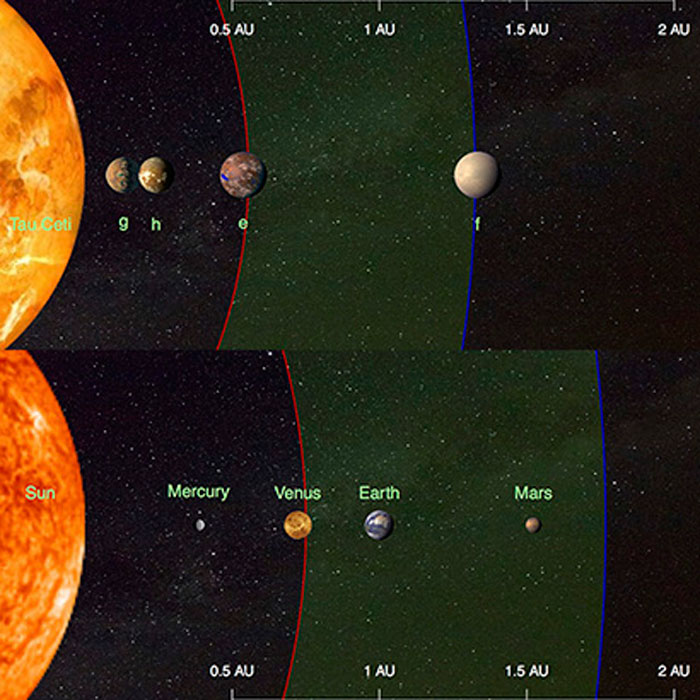 The researchers say that if this method can be refined further to the point where we can detect variations as minor as 10 cm/s, we'll pass a threshold where we can definitely tell the gravitational pull of exoplanets from noise in the signal generated by stellar fluctuations.

"Our detection of such weak wobbles is a milestone in the search for Earth analogues and the understanding of the Earth's habitability through comparison with these."

The worlds the team found include two super-Earths (planets with masses greater than Earth), both of which are clinging just within the boundaries of Tau Ceti's habitable zone.

This means they sit in the region surrounding the star where the conditions could support liquid water on their surface, and by extension, perhaps life.

The two other, smaller planets fall outside this temperate space, orbiting the star significantly closer. While they couldn't support water on their surfaces, they're among the smallest, Earth-sized planets ever detected around a nearby Sun-like star, with masses as low as 1.7 times the amount of Earth's mass.

It's not the first time Tau Ceti has been found to host potentially habitable worlds. The same team announced a few years back that they'd discovered five worlds orbiting the star, and the latest research serves as an amendment to their previous work.

This time, they're sure they've got it right.

"Since then we've painstakingly improved the sensitivity of our techniques and could rule out two of the signals our team identified in 2013 as planets," says one of the researchers, Mikko Tuomi.

"But no matter how we look at the star, there seems to be at least four rocky planets orbiting it."

It's incredibly exciting to have two new habitable world candidates in a star system so comparatively nearby. Among other recent prospects, Tau Ceti may be farther than another much-hoped-for candidate, Proxima b (4.2 light-years away), but it's closer than the TRAPPIST–1 cohort (about 39 light-years distant).

Still, the researchers say we shouldn't get carried away with ourselves here, because a huge ring of space debris surrounds the Tau Ceti system, meaning these alien worlds – lifeless or not – could be threatened by intensive bombardment from asteroids and comets.

If so, that means they're far less likely to be habitable – and there's also the issue of the super Earths hanging uncomfortably close to the outskirts of Tau Ceti's habitable zone – although it's premature to abandon all hope.

The next step will be to try to perceive these still-unseen worlds by telescope, to see what we can learn from them through direct observations.

Until then, the evolving mystery of Tau Ceti's habitability remains debatable – but we've definitely got our fingers crossed.

The findings are due to appear in an upcoming edition of The Astrophysical Journal.