Horrifying Photo of Huntsman Spider Nest Will Haunt You, But Scientists Are Excited

Huntsmans may be the gentle giants of Australia's spider world, but they definitely have a somewhat alarming mien. With their round furry bodies and long, gangly, sideways-jointed legs, just one of these hand-sized beasties can deliver an impressive startle.

Now imagine the surprise of Bush Heritage Australia ecologist Angela Sanders when she opened a possum habitat box to find not one, but dozens of huntsmans (yes, that is the plural), all packed in and scuttling around like leggy sardines. 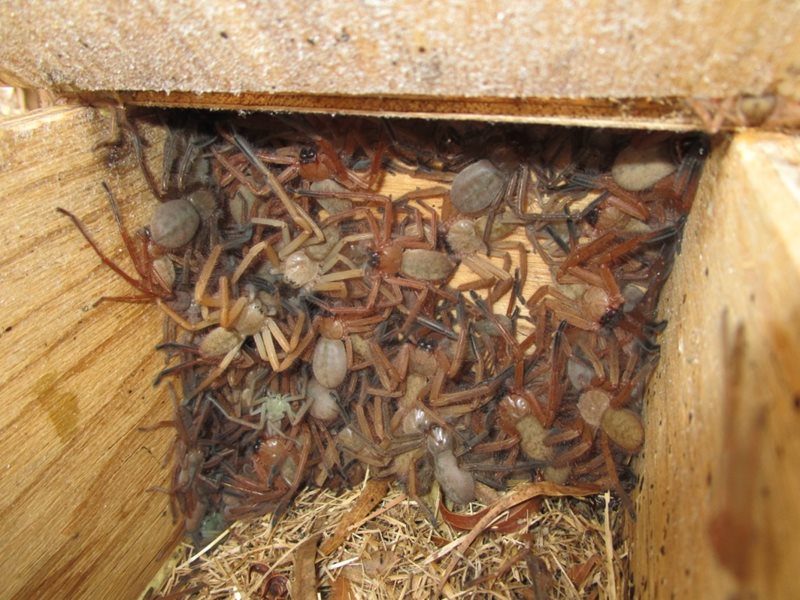 Where someone else might shriek, Sanders and her team welcomed the sight - because it means that the ecosystems they have been working to restore are now healthy enough to support stronger species diversity.

The Monjebup Nature Reserve in Western Australia is a conservation effort to restore the natural ecology of land that has suffered decades of clearing.

As part of that effort, trees have been planted to provide habitats for the native animals, and there is now enough vegetation to provide food for animals such as the western pygmy possum (Cercartetus concinnus) and huntsman spiders (genus Delena). 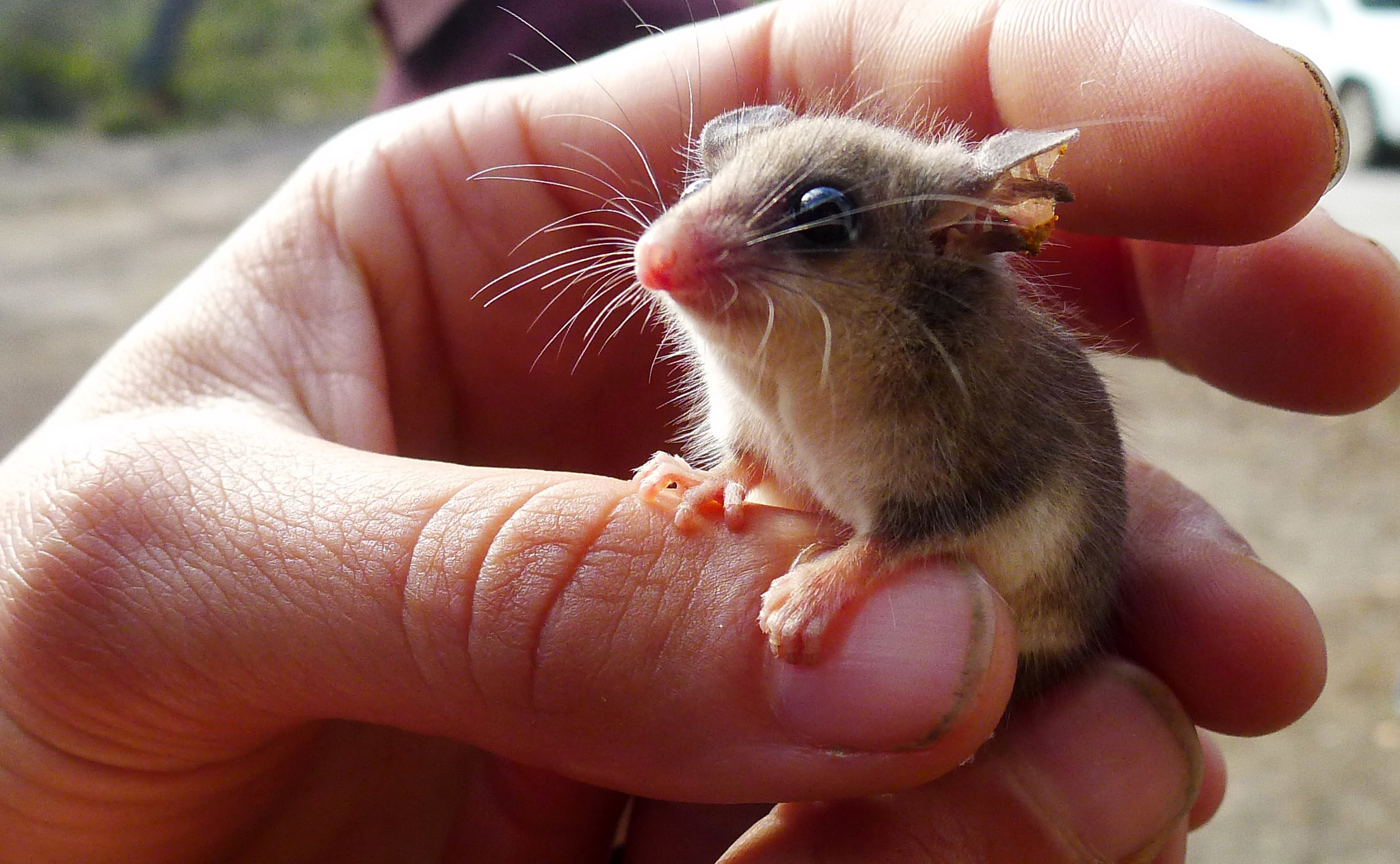 However, the trees aren't quite mature enough for the hollows that the pygmy possums use as habitat, so Bush Heritage Australia staff have set up a whole bunch of habitat boxes for the little creatures.

But huntsman spiders live in the trees too - under thick, loose bark, and in fallen logs. The trees aren't mature enough for those habitats, either - so, clearly, the huntsmans just moved into what was available: the possum boxes.

"They're a species of huntsman that live together, normally under the bark of trees," Sanders wrote in a blog post. "In the restored area tree bark is in short supply at present and they've found the wooden boxes suitable." 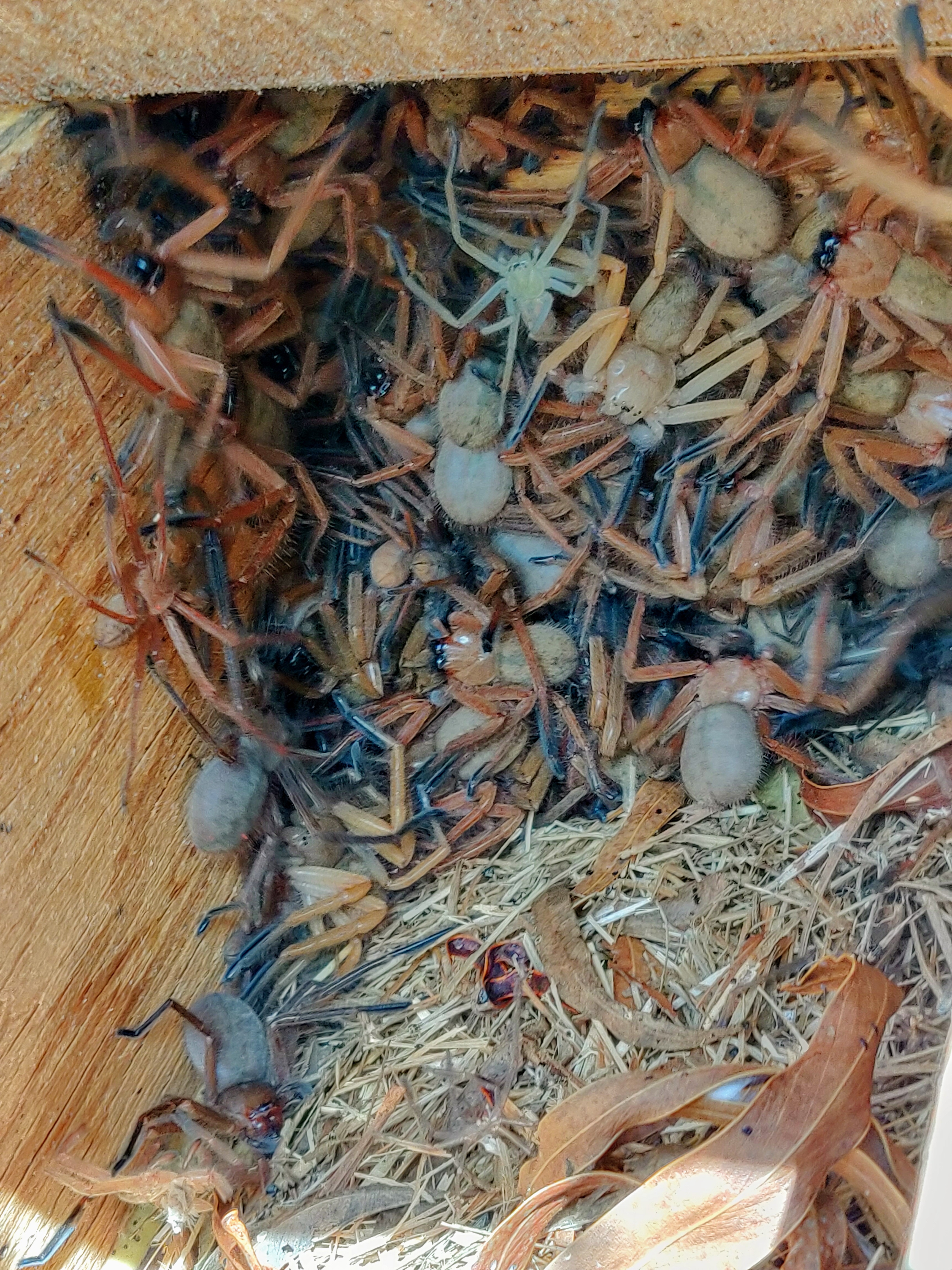 That many spiders cohabiting in one spot might look strange, and it sort of is. Most spiders are solitary, with the juveniles leaving the nest and going their own way after growing big enough to fend for themselves.

But some spiders are more social, living together in family groups, sometimes spinning colossal webs. Huntsmans won't do the latter part - as the name suggests, they are hunting and foraging spiders, and they don't build webs - but cohabiting does confer other benefits aside from communal web-spinning.

A recent study found, for instance, that spiders that spend longer with their young before they leave the nest produce stronger, more robust offspring.

"The spiders in the possum boxes are all the one species, the different sizes and colours are from there being specimens from several different ages," arachnologist Julianne Waldock of the Western Australian Museum told ScienceAlert.

"Why are there so many gathered in one place? Two species of Delena have been studied by Dr Linda Rayor's lab at Cornell University, D. lapidicola (Western Australia) and D. cancerides (from Eastern Australia).

"Both these species show extreme tolerance of kin and non-kin which is unusual for spiders. The research indicates that this tolerance relates to availability of retreats and that extreme tolerance leads to the ability to share this scarce resource. The larger members of a group will even share food with smaller members."

So, where available habitats are scarce - which they currently are at Monjebup - the spiders are working together to share resources and give everyone a chance at growing big and strong. It's a glorious spider cuddle puddle.

And don't worry about the pygmy possums - Bush Heritage Australia assured ScienceAlert that there are more than enough habitat boxes for everyone.

You can keep up to date with Bush Heritage Australia's work on their website.