Scientists Have Broken The Efficiency Record For Mass-Produced Solar Panels

Researchers in Japan have set a new record for the efficiency of mass-produced solar panels, meaning even more of the Sun's energy can now be converted into electricity.

The efficiency record for solar panels now stands at 26.6 percent - breaking the previous record established in 2015.

"Improving the photoconversion efficiency of silicon solar cells is crucial to further the deployment of renewable electricity," the team from Japan's Kaneko company explains. "This result confirms the strong potential of silicon photovoltaics."

To reach their record-breaking efficiency level, the team layered silicon inside individual cells to minimise band gaps where electrons can't exist and sunlight is wasted.

This approach is called thin-film heterojunction (HJ) optimisation, and while other scientists have attempted the procedure before, the Kaneko researchers improved the technique and were able to achieve that 26.6 percent milestone.

The team optimised their setup by placing low-resistance electrodes toward the rear of the cell, away from the exposed side, maximising the number of photons that could be collected from the front.

That photon collection was then made even more efficient with amorphous silicon and anti-reflective layers on top, to protect the cell components and reduce the amount of sunlight being lost.

While research-oriented panels have reached higher efficiencies - over 40 percent in some cases - this is a new record for panels viable for home use, although it's not always easy to say which technologies are feasible for consumer panels.

The definition of what's consumer-friendly is always changing, as production processes improve and costs come down, so keeping track can be tricky. But the bottom line is we're making progress.

In this specific case, we're talking about crystalline silicon-based solar panel cells, which have a theoretical efficiency of around 29 percent based on scientists' best estimates.

These cells have become the industry standard thanks to their reliability and relatively low cost. 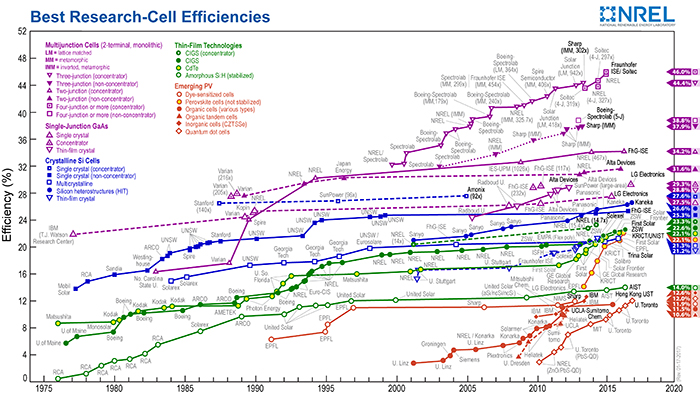 As always, the Efficiency Chart (above) produced by the US National Renewable Energy Lab is a useful guide to where the various solar panel technologies are up to.

You can see the new Kaneko record marked on the right-hand side (click here for a bigger version).

The team is now exploring the practical steps needed to make the technique they've achieved in the lab ready for mass production, but it sounds like it won't be long before we're tapping into even more power from the Sun - and that can only be a good thing.

The research has been published in Nature Energy.