If you're like most of our readers, you're probably reading this right now on your mobile, which means there's also a chance you're reading it on a broken, fragmented phone screen.

Luckily, the days of squinting at cracked phone displays like this could soon be over, thanks to a team of Japanese scientists who have developed a new kind of self-healing glass that fuses itself back together, simply by pressure being applied.

The self-healing polymer, created by researchers at the University of Tokyo, was initially discovered by accident while they were studying new adhesives.

During the research, one of the team noticed that the polymer he was examining for use as a glue had the ability to adhere to itself when cut, compressed and held together for 30 seconds at room temperature (21 degrees Celsius, or 70 degrees Fahrenheit). 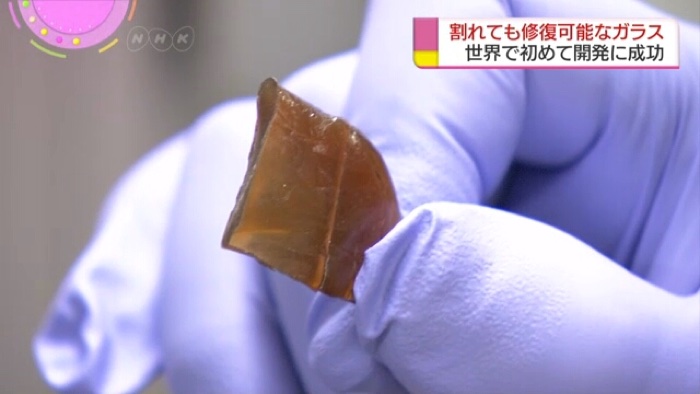 Not trusting the chance result, Yu Yanagisawa, a graduate student in the university's department of chemistry and biotechnology, ran a series of follow-up experiments to confirm the self-healing glass really did work.

According to the team, the glass is made possible thanks to a low weight polymer called 'polyether-thiourea', which makes use of the compound thiourea to increase the ability of hydrogen bonding in the material when it is cut or broken.

It's not the first time researchers have designed self-healing materials like this, but what sets the new polymer apart is that it's structurally robust, like glass, but also capable of self-healing – properties that are often mutually exclusive in engineered compounds.

What also makes the glass unique is that it performs its self-adhering function at room temperature, whereas other self-healing materials often require heating to induce their bonding behaviour.

Plus, the material also manages to glue itself back together quicker than other previously developed efforts.

One such, unveiled by Californian researchers at the earlier in the year, was also touted as a replacement for fragile mobile displays, but required almost a whole day to heal itself.

Outside of phone screens, another area where self-healing materials are being looked at is in the field of medicine, where soft, adaptive substances may one day be used inside the human body for things like strengthening bones and helping to engineer tissue.

Before that happens, there's a good chance the Japanese team's accidental discovery might heal another vulnerable extension of the human body: your bank balance, thanks to all the broken phone screens you won't have to repair or replace.

Not to mention the toll discarded electronics have on the environment.

"I hope the repairable glass becomes a new environment-friendly material that avoids the need to be thrown away if broken," Yanagisawa told NHK.

Where do we pre-order?

Trending News
Record-Breaking Signal From Distant Galaxy Is Furthest of Its Kind Ever Detected Space4 days ago
Obesity Expert Reveals What You Should Do When Weight Loss Plateaus Health4 days ago
The Oldest Styles of Art Were Creative Abstracts, And Probably Not Made by Us Humans4 days ago