Feast Your Eyes on 'Unprecedented' New Pics Revealed of Our Sun

A spacecraft that just skimmed the Sun has delivered the highest-resolution image yet of our home star's full disk and atmosphere.

On 7 March, the European Space Agency's Solar Orbiter took the image with its Extreme Ultraviolet Imager (EUI) when it was at a distance of just 75 million kilometers (46.6 million miles) – half the distance between Earth's average orbit and the Sun.

At that distance, the spacecraft needed to take 25 different images, each a nearly 10-minute exposure, which had to be stitched together into a mosaic to construct the full image. The result is a 9,148 by 9,112 pixel extravaganza. That's 83 million pixels of solar magnificence.

The result is incredible: a fully zoomable image that allows you to pore over fine details of the solar surface and corona (atmosphere), including several solar 'prominences' around the edge of the disk that sometimes erupt and eject massive amounts of plasma into space.

You can zoom in on the image below; if it's not appearing for you, please click this link.

The EUI is just one of the spacecraft's instruments. When studying the Sun, it's helpful to look at a range of wavelengths, since different atoms emit light differently. The Spectral Imaging of the Coronal Environment (SPICE) instrument is designed for this granular detail; while the EUI was imaging the Sun, so too was SPICE collecting mosaics of its own.

The hydrogen image is the first full image of the Sun of its kind in 50 years, and absolutely the best, so you can guarantee solar scientists are going to be bouncing in their seats to study it. 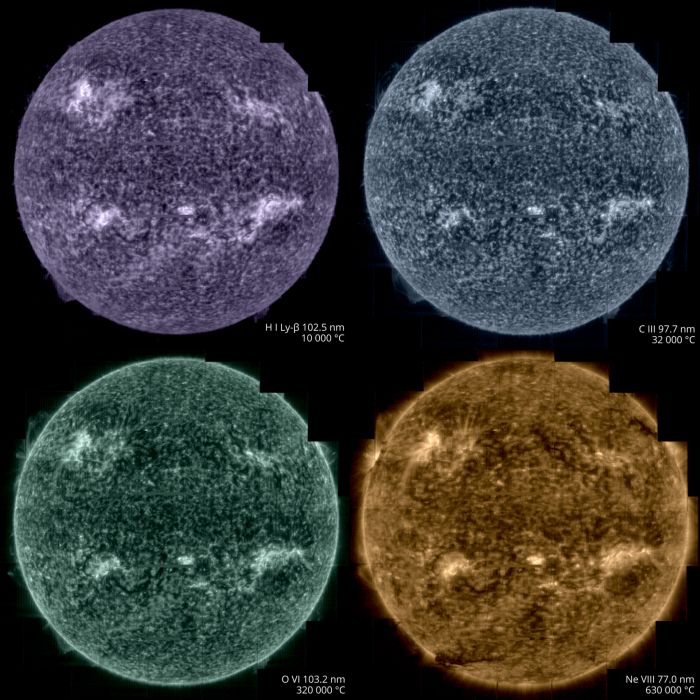 Fascinatingly, the hotter temperatures occur farther from the surface of the Sun, which is only about 5,000 degrees Celsius: Solar physicists have been trying to solve this mystery. High resolution images like those taken by the Solar Orbiter might help in this endeavor.

Such images will also help scientists better understand solar eruptions. This is of interest to every human: when the Sun erupts in the direction of Earth, the collision of solar particles with Earth's magnetic field and atmosphere can result in a geomagnetic storm that can interfere with day-to-day operations of some technologies.

The Solar Orbiter, which launched just over two years ago, in February 2020, is designed to take detailed measurements of the Sun that are impossible to obtain from Earth, including the solar poles. It will be swooping in close to the Sun (a perihelion) at least 19 times, flying out to Venus at several points during its mission to collect velocity in gravity assist maneuvers.

It just completed its first perihelion on 26 March, getting as close as just 48 million kilometers from the star. It should have collected its first up close data on the solar poles, and sampled the solar wind.

The next perihelion is due to take place next year, at which point the orbiter will veer even closer to the Sun. We're hoping images from the first perihelion are even more spectacular, and can't wait to see what the little spacecraft sends home in the months and years ahead.