Can LSD Microdosing Tip The Scales in a New Human Versus AI Battle?

Last year, scientists imaged the human brain on LSD for the first time, showing how the powerful psychedelic activates regions and causes them to connect with each other in totally new and unified ways.

It was the first solid evidence of the drug's ability to change the way our brains function. Now, researchers want to test whether microdosing LSD - taking a small amount that doesn't have a hallucinogenic effect - can offer the same mental boost. And they're planning to pit microdosed humans against AI in the ancient Chinese game of Go to do it.

The idea came from lead researcher Amanda Feilding, who took LSD (lysergic acid deithylamide) daily before work to boost her productivity and creativity before it was made illegal in 1968.

Back then, she also played a lot of Go in her spare time.

"I found that if I was on LSD and my opponent wasn't, I won more games," Feilding told Daniel Oberhaus from Motherboard.

"For me, that was a very clear indication that it improves cognitive function, particularly a kind of intuitive pattern recognition."

Feilding now runs the Beckley Foundation for psychedelic research in the UK, which partly funded last year's brain imaging study. She's also well known in the neuroscience world for drilling a hole in her own head to study the science of consciousness.

In last year's study, a team from Imperial College London took 20 healthy volunteers, gave them a hefty 75 micrograms of LSD one day and a placebo the next, and then studied their brains using three different image techniques.

They found that while the volunteers were under the effects of LSD, their visual processing was no longer limited to the visual cortex - multiple regions of the brain were kicking in, as though they were "seeing with their eyes shut". 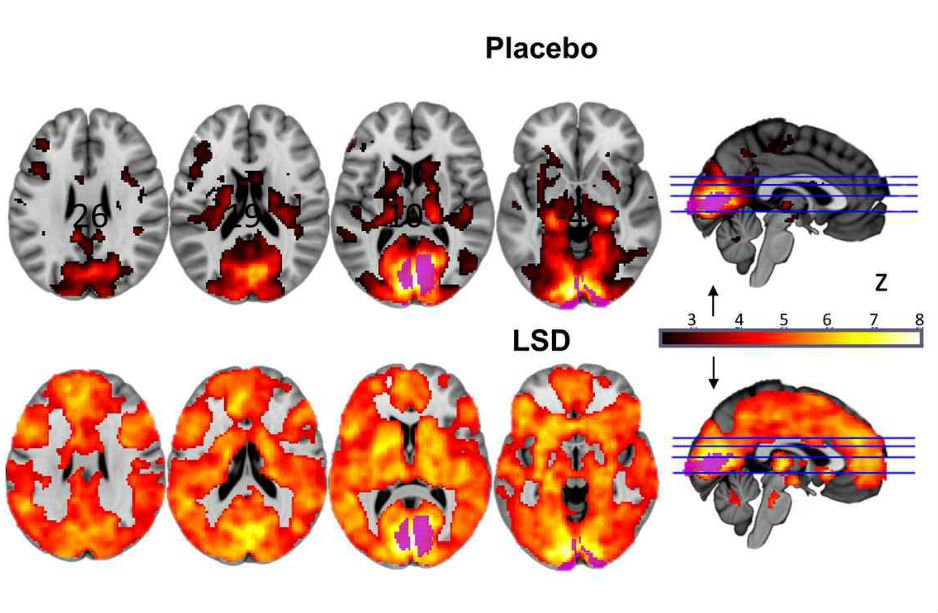 The brain also began to connect with itself in interesting ways.

"Normally our brain consists of independent networks that perform separate specialised functions, such as vision, movement and hearing - as well as more complex things like attention," said one of the researchers, Robin Carhart-Harris, at the time.

"However, under LSD the separateness of these networks breaks down and instead you see a more integrated or unified brain."

Ever since LSD was created back in 1938, people have reported that the psychedelic is capable of 'elevating' their minds and changing their thinking.

But official research into the drug pretty much ground to a halt when it was made illegal in the US almost 50 years ago, so last year's study was a pretty big deal ("This is to neuroscience what the Higgs boson was to particle physics," lead researcher David Nutt told The Guardian.)

It was even more momentous because, in recent years, scientists have also shown that psychedelic drugs have huge therapeutic potential for treating people with psychiatric disorders, such as depression and addiction, or maybe even asthma.

But despite their potential, the current side effects aren't really acceptable… it's not exactly practical to get high on a full dose of LSD before work to improve your creativity, or before bed to help with depression.

So people have begun experimenting recreationally with microdosing instead - usually taking less than around 20 micrograms of LSD to get the brain-boosting benefits without the high (it's something of a fad in Silicon Valley right now).

However, despite many anecdotal reports on this process, there have never been any controlled scientific studies.

"For decades, we have seen anecdotal evidence that microdosing improves mood and well-being, enhances cognition, increases productivity, and boosts creativity," said Feilding in a press release.

"Now we have the opportunity to undertake the first controlled scientific investigation…into the effects of microdosing LSD, thereby finally establishing whether the claims about its benefits are true."

Her plan is to recruit 20 participants who will be given low doses - either 10, 20, or 50 micrograms - of LSD, or a placebo, across four different occasions.

After taking the drug, Feilding tells Oberhaus that the participants' brains will be imaged using MRI and a technique called MEG, while they perform a range of cognitive tasks.

Most importantly, the researchers will be pitting them against AI in Go - a highly strategic game that's a little like Chess, but with a great deal more variability.

AI researchers have also seen Go as a difficult domain for machine learning due to the game's complexity and openness. It was only last year that an AI, Google DeepMind's AlphaGo, was able to beat a human grandmaster at the game. But we don't expect Feilding will be aiming to tackle an AI quite on that level.

Feilding's study could show us whether small doses of LSD might give us back a competitive advantage.

There's no official timeframe for the study, but the foundation has just launched a crowdfunding campaign and want to raise around US$350,000.

Feilding told Erin Brodwin from Business Insider that the study could begin as early as this month, and they hope to get first results by the end of the year.

"I'm very interested in that level of [potential] cognitive enhancement which isn't a full-blown psychedelic state but is a lift in productivity and cognition and amusement or thinking further than one usually does."

We'll be watching the results closely.