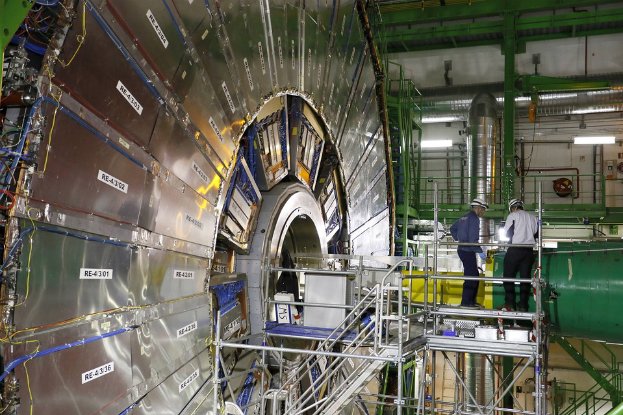 Physicists from CERN in Geneva have discovered two new types of baryon particles named Xi_b'- and Xi_b*- (before you ask, no, we’re not sure how to pronounce them).

Baryon particles are subatomic particles such as hyperons that are made up of three strongly-bonded tiny elementary particles called quarks - which are generally thought to be some of the smallest units of matter.

Xi_b’- and Xi_b*- were both predicted to already exist by the quantum physics models, but they’d never been seen before this and scientists weren’t sure of their exact mass - something they’ve now managed to calculate. And the heavy-weight subatomic particles impressively big - both are more than six times as massive as protons.

The new baryons were spotted in the Large Hadron Collider (LHC), the particle accelerator most famous for (probably) finding the Higgs boson.

The LHC works by accelerating two opposing beams of particles to speeds approaching the speed of light, and when they collide, they create an extremely hot explosion, which allows never-before-seen particles and types of matter to form very briefly.

In this split-second after-collision is when all the magic happens and physicists can find proof for things they’ve previously only ever hypothesised using formulae.

Just like baryons, protons are almost made of three tightly-bound quarks, but what’s particularly fascinating about Xi_b’- and Xi-b*- is that each of their quarks has a different spin, or direction in which they configure. Both subatomic particles contain one beauty quark (which accounts for most of their weight), one strange quark and one down quark.

As Nicholas St. Fleur explains for The Atlantic:

“The finding helps physicists narrow down the different ways that quarks can be arranged, which provides clues into understanding the forces that keep them and the most basic building blocks of matter held together”.

The results have been submitted to Physical Review Letters, but appear online now on ArXiv.

“There are maybe three-to-five such particles discovered each year,” Patrick Koppenburg, a CERN scientist from the Netherlands’ Nikhef Institute, told The Wall Street Journal. “Here we have two in one go, which is quite extraordinary.”

The researchers have also studied the relative production rates of the baryons, their widths - which can measure how unstable they are - as well as other details of their decay.

All of the results matched up with what they’d predicted of the baryons based on the theory of Quantum Chromodynamics (QCD).

“If we want to find new physics beyond the Standard Model, we need first to have a sharp picture,” said Patrick Koppenburg, the physics coordinator of the LHCb, the instrument that detected the baryons, in a press release. “Such high precision studies will help us to differentiate between Standard Model effects and anything new or unexpected in the future.”

"In 2011, a collaboration between CERN and the Italian OPERA experiment announced finding faster-than-light neutrinos, a discovery that was later undone after further investigation, as ScienceInsider reported in 2012. Even now, some physicists still debate whether or not physicists actually found the Higgs Boson."

But although it will take some more peer-reviewed research for the discovery to become widely accepted, it's still a pretty exciting first step.

"This is a very exciting result. Thanks to LHCb's excellent hadron identification, which is unique among the LHC experiments, we were able to separate a very clean and strong signal from the background," said Steven Blusk from Syracuse University in New York, who wasn’t involved in the research, in the CERN press release. “It demonstrates once again the sensitivity and how precise the LHCb detector is.”