Enough of biosensor "tattoos" that are just a wearable sticker. Scientists in Germany have developed an actual, intradermal tattoo that can change colour in response to changing levels of glucose, albumin, or pH.

They haven't yet been tested in humans, but on pieces of pig skin the tattoos shifted across a range of hues as scientists tweaked the concentrations of the key biomarkers.

It's an exciting first step that could lead to real tattoos that let patients and doctors monitor chronic diseases such as diabetes and kidney disease in real-time.

The team, led by chemical engineer Ali Yetisen of the Technical University of Munich, was then able to accurately estimate the concentrations based on smartphone photos of the tattoos.

While not all the dyes are yet reversible, this could be a transformative technology for personalised medicine - based on decorative body modification practices humans have been performing for thousands of years.

"Body modification by injecting pigments into the dermis layer is a custom more than 4000 years old," the researchers wrote in their paper.

"Here, a functional cosmetic technology was developed by combining tattoo artistry and colorimetric biosensors… Dermal tattoo sensors functioned as diagnostic displays by exhibiting colour changes within the visible spectrum in response to variations in pH, glucose, and albumin concentrations." 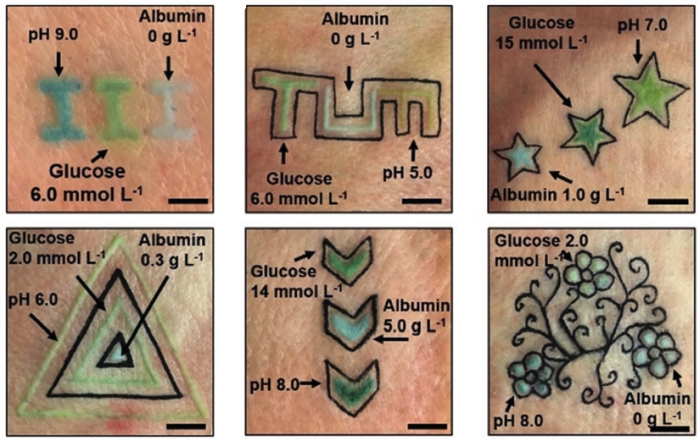 Glucose needs to be closely monitored for the management of diabetes, which impairs the body's ability to metabolise sugars. And changes in the pH level of your blood - acidosis for low pH, alkalosis for high - can be caused by a range of issues which should be investigated by medical professionals.

The team created a different colour-changing dye that could detect changes in each of these biomarkers in the interstitial fluid. That's the stuff that leaks out of your capillaries and fills the spaces between the cells, transporting things like oxygen and glucose.

The albumin sensor is a yellow dye that turns green in the presence of albumin - the more albumin, the more green it becomes (although in these images it looks quite blue in colour).

The glucose sensor took advantage of the enzymatic reactions of glucose oxidase and peroxidase; the changing concentration of glucose produces a structural change in the pigment from yellow to dark green.

And the pH sensor consisted of the dyes methyl red, bromothymol blue, and phenolphthalein. At a pH range from 5 to 9 - normal human blood pH hovers around 7.4 - the sensor ranges from yellow to blue. 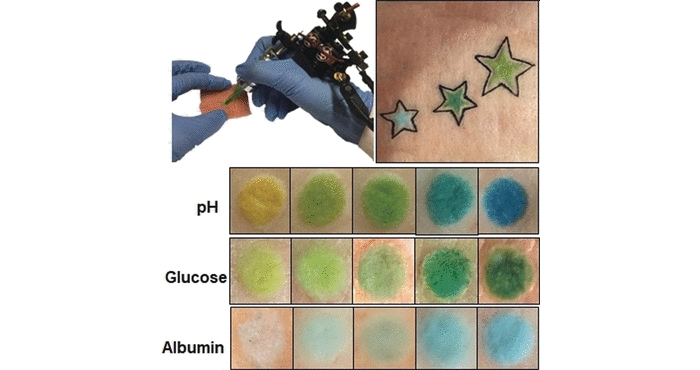 When the levels of these biomarkers were changed in the interstitial fluid in the pieces of pig skin (which is a common medium for tattoo artists to practice on), the colours changed too.

It's not yet ready for human use; for one thing, as we mentioned earlier, it's only been tested on pig skin so far.

In addition, only the colour of the pH sensor was reversible - and it's not much help if the tattoo only works for one reading. The others could, the researchers said, be made reversible with synthetic receptors, but they've yet to test these out - that's for future research.

The next step, they said, is probably to test the tattoos in living animals, to see if the inks cause adverse reactions.

As researchers from MIT said when they developed similar colour-changing tattoo inks in 2017, this process could take a while. But looking into it further could definitely be worth it.

"The applications of the sensors can be extended to the detection of electrolytes, proteins, pathogenic microorganisms, gases, and dehydration status," the researchers wrote.

"The developed dermal sensors may have an application in medical diagnostics to monitor a broad range of metabolite biomarkers."

All while looking badass as heck.

The research has been published in Angewandte Chemie International Edition.