As a scientist, there are few things more soul-crushing than spending months or years working on a paper, only to have it rejected by your journal of choice - especially when you really feel like you're onto something important.

But it turns out that plenty of world-famous researchers went through rejection before finally having their papers published - including a few papers that later went on to win a Nobel Prize.

That's not to say the publication system failed these researchers - in fact, the rejection process is part of good, healthy peer-review.

Peer-review involves having a group of independent researchers read every paper submitted to a journal to make sure that the methods and conclusions are solid. They will often suggest revisions to be made, and can reject a paper if they think more work needs to be done, or if it's not the right fit for the journal.

Following rejection, the end product is usually better than it would have been originally - or it at least, ends up in a more approporiate journal.

Hearing about the renowned pieces of work that faced setbacks before going on to revolutionise the field is a comforting reminder that rejection isn't necessarily the end of your research - sometimes it's just the beginning.

"It contained speculations too remote from reality to be of interest to the reader." - Frank Close, Small Things and Nothing

Weak interaction, one of the four (or potentially five) fundamental forces of nature, was first described by Enrico Fermi back in 1933, in his paper "An attempt of a theory of beta radiation," published in German journal Zeitschrift für Physik.

But it was first rejected from Nature for being 'too removed from reality'.

The paper went on to be the foundation of the work that won Fermi the 1938 Nobel Prize in Physics, at the age of 37, for "demonstrations of the existence of new radioactive elements produced by neutron irradiation, and for his related discovery of nuclear reactions brought about by slow neutrons". 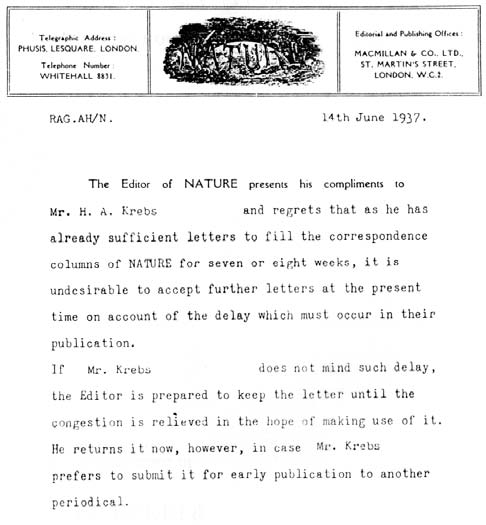 Yes, even scientists who have textbook processes named after them have faced rejection. There wasn't anything wrong with Krebs' paper, but Nature had such a backlog of submissions at the time that they simply couldn't look at it.

"This was the first time in my career, after having published more than 50 papers, that I had rejection or semi-rejection," Krebs wrote in his memoir.

The paper, "The role of citric acid in intermediate metabolism in animal tissues," went on to be published in the Dutch journal Enzymologia later that year, and in 1953 Krebs won the Nobel Prize in Medicine for "his discovery of the citric acid cycle".

I should say now that I have always hated the Physical Review Letters and almost 20 years ago I decided never again to publish in that journal, but in 1953 I was scarcely in a position to shop around." - Murray Gell-Mann, Strangeness

Sometimes it's not the content of a journal article that has it rejected, but the headline.

In the end it didn't really matter what the headline was, seeing as Gell-Mann was awarded the 1969 Nobel Prize in Physics "for his contributions and discoveries concerning the classification of elementary particles and their interactions".

4. The invention of the radioimmunoassay, 1955 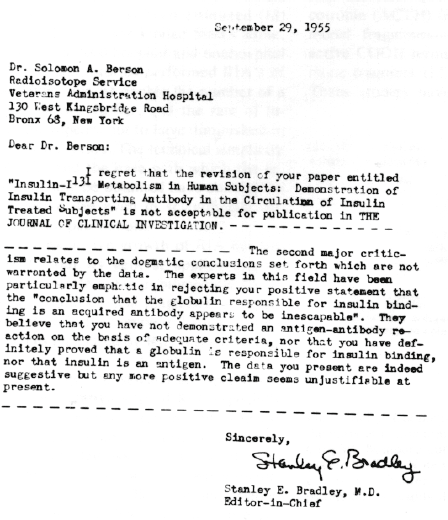 Years after winning the Nobel Prize in Physiology and Medicine in 1977, Rosalyn Yalow would show this rejection letter around proudly.

It was sent by The Journal of Clinical Investigation because the reviewers were skeptical that humans could make antibodies small enough to bind to things like insulin.

She proved them wrong, and now radioimmunoassay is a common technique used for determining antibody levels in the body - it works by releasing an antigen tagged with a radioisotope and tracking it around the body.

"[Peter] Higgs wrote a second short paper describing what came to be called 'the Higgs model' and submitted it to Physics Letters, but it was rejected on the grounds that it did not warrant rapid publication." - The University of Edinburgh

This one took a while to earn recognition, but after having his seminal paper on the Higgs model rejected back in 1966, Higgs was finally awarded the Nobel Prize in Physics in 2013, after researchers at CERN detected evidence of the Higgs boson at their ATLAS and CMS experiments.

"The response to our invention was however meagre. The paper that described our achievements was rejected twice by the Journal of Chemical Physics to be finally accepted and published in the Review of Scientific Instruments." - Richard Ernst, Nobel Prize

You might not have heard much about NMR spectroscopy, but it's responsible for revealing details about the structure and dynamics of molecules - something that's incredibly handy for chemists and biochemists.

But the first paper outlining the technology, "Application of Fourier Transform Spectroscopy to Magnetic Resonance," received little attention at the time.

Richard Ernst received the Nobel Prize in Chemistry in 1991.

"It was rejected on the grounds that it will not interest physicists." - Dan Shechtman

Quasicrystals are structures that are ordered but not periodic, but when Dan Shectman first reported on these strange structures back in his 1984 paper "The Microstructure of Rapidly Solidified Al6Mn," it was rejected by Physical Review Letters for being more relevant to metallurgic researchers.

It was published by Metallurgic Transactions A later that year, and Shechtman went on to win the Nobel Prize in 2011.

"Dan Koshland would be the editor of Science when my first PCR paper was rejected from that journal and also the editor when PCR was three years later proclaimed Molecule of the Year." - Kary Mullis, Nobel Prize

Kary Mullis was jointly awarded the 1993 Nobel Prize in Chemistry for "his invention of the polymerase chain reaction (PCR) method".

PCR is the technique that is used every day in labs across the world to amplify DNA strands - but the first paper describing it was rejected by Science. No word as yet on why, but we bet the journal was pretty sore to miss out on that scoop.

If you want more healthy reminding of the long list of no's behind success, check out the CV of failures a Princeton professor wrote earlier this year.

I don't know about you, but I feel so much better now.