We now have some solid evidence that ticks really did suck the blood of dinosaurs – something scientists and sci-fi writers have previously suspected – thanks to the discovery of a 99 million-year-old piece of Burmese amber.

Inside the amber, researchers found a hard tick grasping a feather, thought to be from one of the feathered dinosaurs of the Cretaceous period, 145 to 66 million years ago.

It's very rare to find fossils of blood-sucking bugs preserved alongside whatever they fed on, and this is the oldest such sample to be discovered yet, putting ticks and feathered dinosaurs in the same time frame and confirming the feeding link between them.

"Ticks are infamous blood-sucking, parasitic organisms, having a tremendous impact on the health of humans, livestock, pets, and even wildlife, but until now clear evidence of their role in deep time has been lacking," says lead researcher Enrique Peñalver, from the Spanish Geological Survey (IGME).

If you've seen Jurassic Park, you'll know that the movie shows dinosaur DNA being recovered from a mosquito encased in amber.

We know ticks, mosquitoes, and other blood suckers were around at the time of the dinosaurs, thanks to the way some of them have been preserved by getting trapped in tree sap, but the question has remained about what exactly they have fed on.

Dinosaurs were probably included in their blood diet, based on what we know about the bugs of today, but up until now this was just a hypothesis.

The new discovery puts feathered dino remains and a tick in the same block of amber, which means the link is now confirmed, even if Jurassic (or Cretaceous) Park remains an impossibility – amber just doesn't preserve DNA well enough for that. 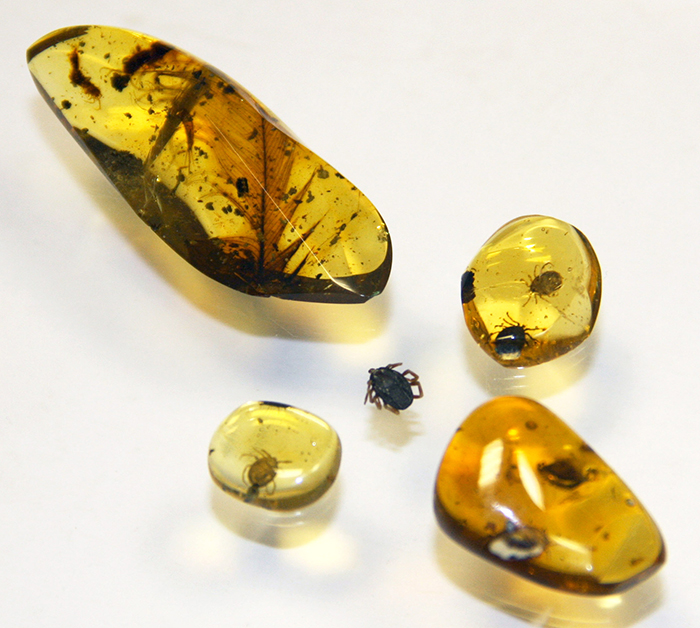 Even if a dinosaur theme park is still out of the question though, the findings can teach us more about the mammals and insects living on Earth some 100 million years ago.

"The fossil record tells us that feathers like the one we have studied were already present on a wide range of theropod dinosaurs, a group which included ground-running forms without flying ability, as well as bird-like dinosaurs capable of powered flight," says one of the researchers, Ricardo Pérez-de la Fuente from the Oxford University Museum of Natural History in the UK.

"So although we can't be sure what kind of dinosaur the tick was feeding on, the mid-Cretaceous age of the Burmese amber confirms that the feather certainly did not belong to a modern bird, as these appeared much later in theropod evolution according to current fossil and molecular evidence."

In another block of amber, the researchers identified a new species of tick they're calling Deinocroton draculi, or "Dracula's terrible tick", but here the link to dinosaur blood is indirect – while the bug is engorged on blood, it's impossible to determine from which animal it is.

The fact that two of these ticks were preserved together with evidence of hair, however, suggests these were dinosaur blood-suckers as well – no mammal hairs have ever been found in Cretaceous amber, so we're probably looking at feathered dinosaurs again.

It's an incredible find, all made possible because of the preserving qualities of amber, and showing dinosaurs really did have annoying blood-sucking parasites to worry about.

"The simultaneous entrapment of two external parasites – the ticks – is extraordinary, and can be best explained if they had a nest-inhabiting ecology as some modern ticks do, living in the host's nest or in their own nest nearby," says one of the team, David Grimaldi of the American Museum of Natural History in New York.