The Atmosphere of Uranus Is Literally Leaking Gas Into Space

Poor old Uranus just can't seem to catch a break. Something already tipped the planet on its side, so its orbit is perpendicular to those of the other Solar System planets. It probably smells terrible. And now scientists have discovered that the atmosphere of Uranus is leaking out into space.

Hidden in the data from Voyager 2's historic 1986 encounter with the icy planet, and undiscovered until now, was the presence of a plasmoid - a pocket of atmospheric material being funnelled away from Uranus by the planet's magnetic field.

It's the first time a plasmoid has been spotted in connection with an ice giant, and it doesn't just show us that Uranus' atmosphere is leaking. It's also revealing some of the dynamics of this planet's peculiar, twisted magnetic field.

Actually, leaky atmospheres aren't that uncommon. It's called atmospheric escape, and it's how Mars, for example, turned from what we think was quite a damp planet into a dusty barren wasteland. Venus is leaking hydrogen. Jupiter's moon Io and Saturn's moon Titan are leaking. Even Earth is losing about 90 tonnes of atmospheric material a day (don't worry, we have around 5,140 trillion tonnes, it will take a long time to completely disappear). 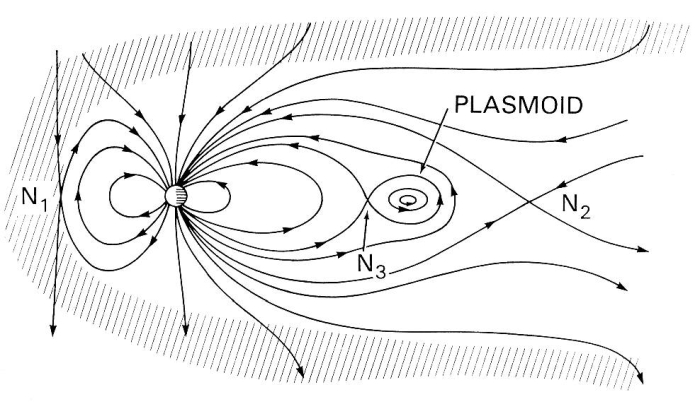 There are several mechanisms whereby this can occur, and one of those is through plasmoids. These are large, cylindrical bubbles of plasma - ionised gas - bound by magnetic field lines streaming away from the Sun, the region known as the magnetotail. The image above shows what that looks like for Earth.

Ions from the atmosphere are channelled along the magnetic field into this region. When the solar wind causes the magnetic field to break at the side facing the Sun - the bow shock - they whip around and reconnect in the tail, pinching off spinning plasmoids. Some of the ions bounce back towards the planet (producing, on Earth, auroras), and the plasmoid hurtles off in the opposite direction, taking the atmospheric ions with it.

For Earth, that's pretty straightforward and well understood. And there's evidence solar wind tears plasmoids off Mars on a daily basis in a slightly different fashion, since Mars doesn't have a global magnetic field.

But Uranus is a tricky beast of a planet, and let's be honest, its magnetic field is a straight-up mess.

Where Earth's magnetic field is more or less consistent with the planet's orientation, Uranus' is all twisted sideways, with the magnetic poles angled 59 degrees away from the geographic poles. And it's not even centred. If you were to draw a line between those two poles, it would miss the centre of Uranus by quite a large distance.

There's even evidence to suggest that the magnetic field opens at night and closes during the day. Seriously, look at this. Who came up with this.

It was this mess of a magnetic field that drew the attention of astronomers Gina DiBraccio and Dan Gershman of NASA Goddard Space Flight Center, who were planning potential planetary missions and thought this particular oddity would be a good starting point.

They were studying the data collected by Voyager 2's magnetometer in January 1986 in higher resolution than any previous research when they noticed a wiggle in the data, a blip in the magnetic field.

They processed the data and came to the conclusion that, yep. Even though Uranus has a weirdly skewed, wobbly magnetic field, that blip did indeed represent a plasmoid, roughly 204,000 kilometres in length and 400,000 kilometres across (127,000 by 250,000 miles), likely full of ionised hydrogen, moving away from the planet.

And this reveals some new information about that magnetic field. According to the researchers' analysis, it shows that Uranus' magnetic field reconnects at the tail, like Earth's. It also suggests that internal forces play a role in the planet's magnetic dynamics.

And, of course, it reveals a mechanism whereby Uranus could be losing a substantial amount of mass, transported away by plasmoids.

The Voyager data used for this analysis is over two decades old, so the researchers suggest the best way to find out more is to send another probe to check it all out.

"The nature of magnetospheric circulation and mass-loss processes remain outstanding and essential topics at both Uranus and Neptune," they wrote in their paper.

"In order to definitively determine the relative contributions of planetary rotation and solar wind forcing in driving global plasma dynamics, new in situ measurements will be necessary. Until then, the enigmatic ice giant magnetospheres await further exploration."