War metaphors are a common cliché in medicine. But sometimes nothing else will do. A battle is looming, one with real lives at risk, and if a new map of the battlefield is anything to go by, losses will be anything but small.

This opinions of nearly 100 million Facebook users across 37 countries has been turned into a colour-coded map of relationships between proponents of vaccines, its opponents, and those whose views lie somewhere in between.

Researchers from across the US applied data analysis techniques commonly used in theoretical physics to create the visualisation, intended to give a virtual bird's eye view of the social media landscape of opinions over vaccinations - and things aren't looking good.

"There is a new world war online surrounding trust in health expertise and science, particularly with misinformation about COVID-19, but also distrust in big pharmaceuticals and governments," says complexity theory researcher Neil Johnson, from George Washington University in the US.

"Nobody knew what the field of battle looked like, though, so we set to find out."

The resulting tangles of lines and smears of dots look complicated at first glance, but this image is merely a snapshot of the boundaries of competing forces and the interactions between them throughout 2019. 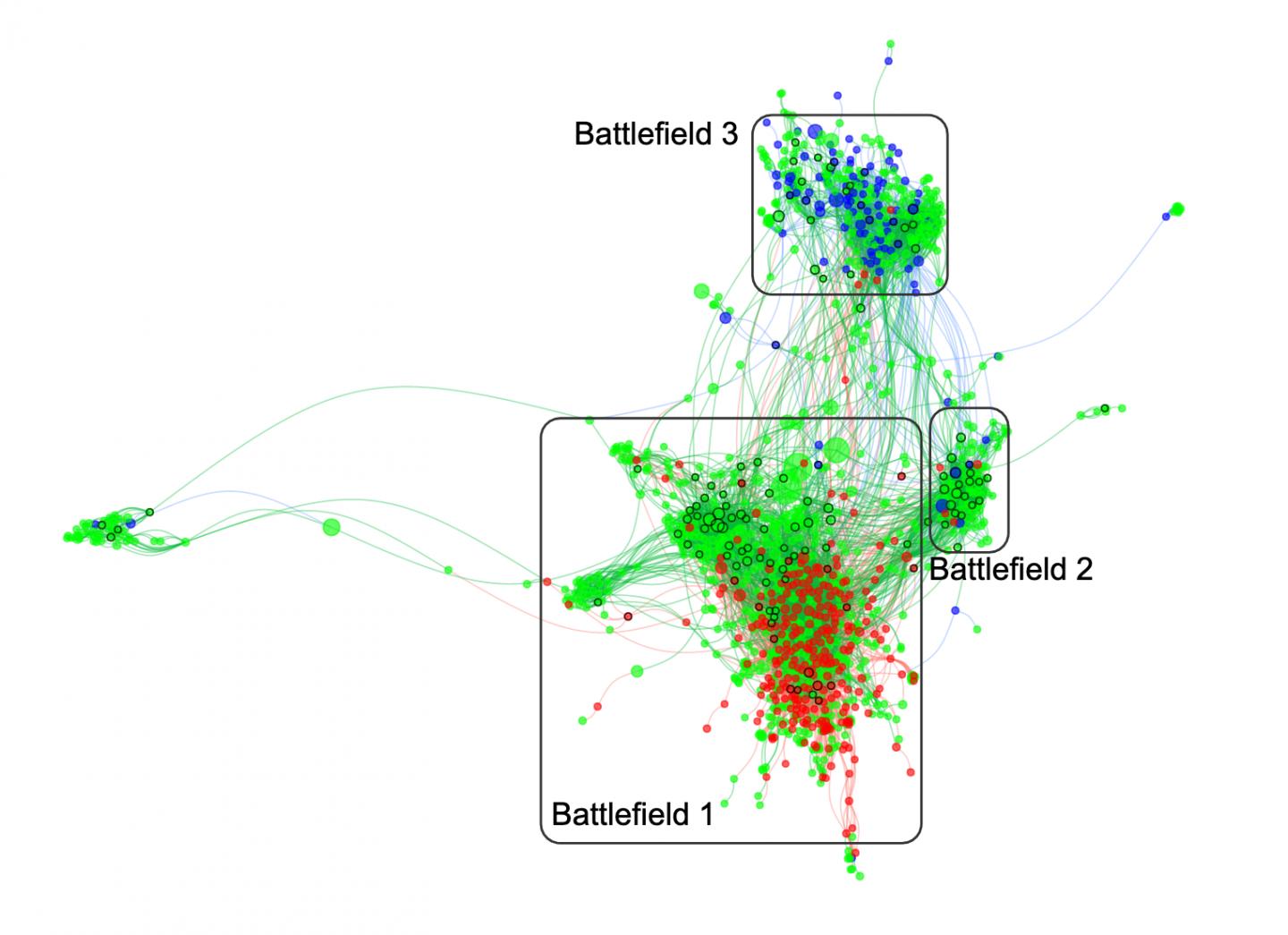 Online communities representing an array of vaccine critics are depicted by red dots, sized proportionately according to the number of followers. Advocates can likewise be seen as blue circles, and those without a clearly defined position are green.

Take a moment to look closely, and a clear pattern quickly emerges.

"The blues are fighting in the wrong place, they are off to one side and the main activity is around the reds which are absolutely entangled with this whole slew of green communities," says Johnson.

To build the map, the researchers used publicly-available information visible on more than 1,000 Facebook pages between February and October 2019, with each page representing a cluster of individuals who are assumed to largely value a position on vaccination.

A data-mapping method called snowballing was then used to describe how the groups connected to one another. Links from each cluster to other pages were counted, with those page's links then also tallied, and so forth. Software then turned this network into a simple graphic.

Looking deeply into the knotted web of links, red nodes are speckled throughout the heartland of greenery, forming a greater number of connections with undecided communities than the blues hovering around the edge.

Just to reinforce the vigorous nature of the red's networking, anti-vaccine Facebook pages boomed during the 2019 measles outbreak, some by up to 500 percent.

If there is any consolation for vaccine advocates, it's that their relatively small number of clusters comprise more individuals, with 6.9 million supporters represented compared with just 4.2 million in the anti-vaccination camp.

Numbers aside, the diversity of anti-vaccination sites and the activity of those weighing their opinions makes for a sobering wake up call.

What seems like passive neutral territory is a dynamic population of individuals reaching out for information. And there's a variety of downright dangerous voices out there ready to supply them with a tailor-made response.

The project began as a way to better understand online interactions over vaccines when a return of measles was the worst we had to fear. A year on, the world is a very different place, shaken by a pandemic of the likes unseen for generations.

News like this makes the complexities of developing a coronavirus vaccine look like child's play. The real challenge will be in convincing enough people it's in the world's best interests to volunteer for immunity.

It's a goal even the World Health Organisation has reservations over achieving. While the organisations behind social networks can play an active role in limiting the reach of vaccine opponents, it's becoming clear that more needs to be done.

"Instead of playing whack-a-mole with a global network of communities that consume and produce (mis)information, public health agencies, social media platforms and governments can use a map like ours and an entirely new set of strategies," says Johnson.

To call the fight against vaccine misinformation an uphill battle is an understatement. It's a war, one we're ill-equipped to win.

But given what's at stake, it's one we can't afford to lose either.