We're All Lost in a Directionless Universe, Study Concludes

Planck image of the Universe now and after the Big Bang. Credit: ESA

Scientists have examined cosmic radiation left over from the Big Bang to put an end to a long-standing debate over whether the Universe is the same in all directions, or if it's aligned on some kind of spin axis.

It turns out that in our rapidly expanding Universe, there is no 'preferred' direction of expansion - the Universe is expanding in every direction at exactly the same rate. And while that's good news for our current cosmological models, it's bad news for Einstein's famous field equations.

But before we get to the new evidence, let's run through some background info first.

For years, scientists have argued that the Universe can function in one of two ways: it can either be homogeneous and isotropic - which means it's fundamentally the same in all directions - or it can be anisotropic, meaning it might look uniform on the outside, but there's actually a 'preferred' direction lurking deep within its fibres.

To wrap your head around the concept of anisotropy, consider a diamond crystal. As Adrian Cho explains for Science magazine, a diamond crystal has uniform density, but its atoms are all lined up in specific directions.

Think about a piece of wood - besides all the superficial bumps and creases on the outside, it's just one substance, one uniform block of wood. But the reality is it's actually stronger along the grain than across it.

In other words, if something is anisotropic, it has a certain physical property that's of a different value when measured in different directions.

The idea of the Universe being anisotropic was proposed in response to certain hints that the Universe might not be as homogeneous and isotropic as we've assumed. But it now looks like the anisotropic Universe hypothesis has far bigger problems to worry about.

Back in 1543, Nicolaus Copernicus proved that Earth is not the centre of the Universe by pointing out that our planet actually orbits the Sun, not the other way around.

"That observation gave birth to the Copernican principle, which holds that we have no special place in the infinite, centreless Universe," says Cho.

"In the early 20th century, with the advent of Albert Einstein's general theory of relativity and the observation that the Universe is expanding in all directions, that idea evolved into the cosmological principle, which assumes that the Universe is the same everywhere and in every direction."

It's a solid hypothesis, and we've since based every current cosmological model - which explain the Big Bang, the expansion of the Universe, and the proportions of everything in it - on the assumption that the Universe is isotropic.

But over the past decade or so, certain details have cast doubt over this idea.

As Cho explains, matter is not distributed evenly across the Universe when you consider it on a small scale. For example, star systems, galaxies, and galaxy clusters are scattered throughout the Universe in random clumps, and scientists have suggested that this means some kind of force or directional flow has pushed them into position.

"This, they assume, arises because the Universe was born as a homogeneous soup of subatomic particles in the Big Bang," says Cho.

"As the Universe underwent an exponential growth spurt called inflation, tiny quantum fluctuations in that soup expanded to gargantuan sizes, providing density variations that would seed the galaxies."

Our standard model of cosmology is built on the assumption that these variations are only significant on a very small scale, and on the largest scales, they're insignificant. But what if the Universe were like a diamond crystal, and there's a preferred direction that's intrinsic to its entire structure, regardless of how far you zoom out?

That's where the anisotropic hypothesis comes in, and the case for it was only made stronger in the early 2000s, when NASA's Wilkinson Microwave Anisotropy Probe (WMAP) spacecraft found strange 'bumps' in the CMB that no one's been able to explain.

In fact, there's one region in our Universe that's so confounding, scientists have literally called it the Axis of Evil - but many have dismissed it as a statistical fluke.

To figure out once and for all which option best reflects the reality of our Universe, cosmologists from University College London in the UK decided to look at the oldest form of radiation in the Universe - the cosmic microwave background (CMB), known as the 'afterglow' of the Big Bang.

Instead of looking for imbalances in the CMB like the Axis of Evil, they tried to find evidence of a preferred direction of expansion.

As one of the team, Daniela Saadeh, told Matt Williams at Universe Today:

"We analysed the temperature and polarisation of the cosmic microwave background (CMB), a relic radiation from the Big Bang, using data from the Planck mission. We compared the real CMB against our predictions for what it would look like in an anisotropic universe.

After this search, we concluded that there is no evidence for these patterns and that the assumption that the Universe is isotropic on large scales is a good one."

The team ended up estimating that there's a 1-in-121,000 chance of a preferred direction of Universal expansion, which is the best endorsement of the isotropic Universe hypothesis we've ever had.

"For the first time, we really exclude anisotropy," Saadeh told Cho at Science. "Before, it was only that it hadn't been probed." 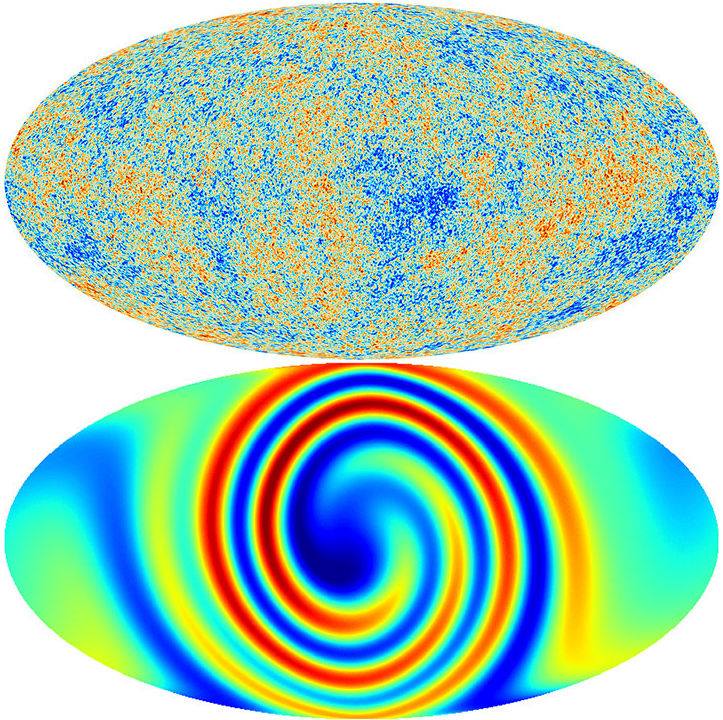 An anisotropic Universe would leave certain patterns in the CMB like that in the bottom image, but the CMB actually looks like the top image, which is entirely random. Credit: (top) ESA and the Planck Collaboration, (bottom) D. Saadeh et. al.

As Universe Today points out, this is a bit disappointing, because a Universe that isn't homogenous and isotropic would support the only real solutions we have to Einstein's field equations - a set of 10 equations in his general theory of relativity that describe the fundamental interaction of gravitation as a result of space-time being curved by matter and energy.

These solutions, proposed by Italian mathematician Luigi Bianchi in the late 19th century, allow for an anisotropic Universe, but if that assumption doesn't hold true, we're probably going to have to figure out a whole new way to explain the results of Einstein's field equations.

But that's a far less complicated prospect than if the evidence overwhelmingly pointed to an anisotropic Universe, and we had to rethink our entire standard model of cosmology. So this is definitely a win, all things considered.

"In the last 10 years there has been considerable discussion around whether there were signs of large-scale anisotropy lurking in the CMB," Saadeh said.

"If the Universe were anisotropic, we would need to revise many of our calculations about its history and content. Planck high-quality data came with a golden opportunity to perform this health check on the standard model of cosmology and the good news is that it is safe."

The results have been accepted for publication in an upcoming edition of Physical Review Letters, and you can access the pre-print version at arXiv.org.