Cretaceous amber has ponied up another spectacular find, and something rarely seen before: tiny arachnids, with mobile tails longer than their bodies.

The creatures were encased in tree resin roughly 100 million years ago, during the mid-Cretaceous, and the discovery shows that the extraordinary family of arachnids could have roamed our planet for at least 280 million years.

But some of the features on these amazing specimens have made scientists disagree on where the newly discovered species sits on the evolutionary tree.

Named Chimerarachne yingi, the arachnid shares a lot of features in common with modern spiders. It has eight legs, two male pedipalps, fangs, and spinnerets on the rear of its opisthosoma.

What makes it confusing is that the creature also has a long flagellate tail, called a telson, measuring around 3 millimetres to the 2.5 millimetres of the arachnid's body.

There are modern-day arachnids with this appendage - in regular scorpions, this is the stinger, and whip scorpions have a long, whip-like tail; but spiders are quite telson-less.

Although it is difficult to say for sure, C. yingi probably used its tail for sensing.

"Any sort of flagelliform appendage tends to be like an antenna," said palaeontologist and arachnologist Paul Selden of the University of Kansas.

"It's for sensing the environment. Animals that have a long whippy tail tend to have it for sensory purposes." 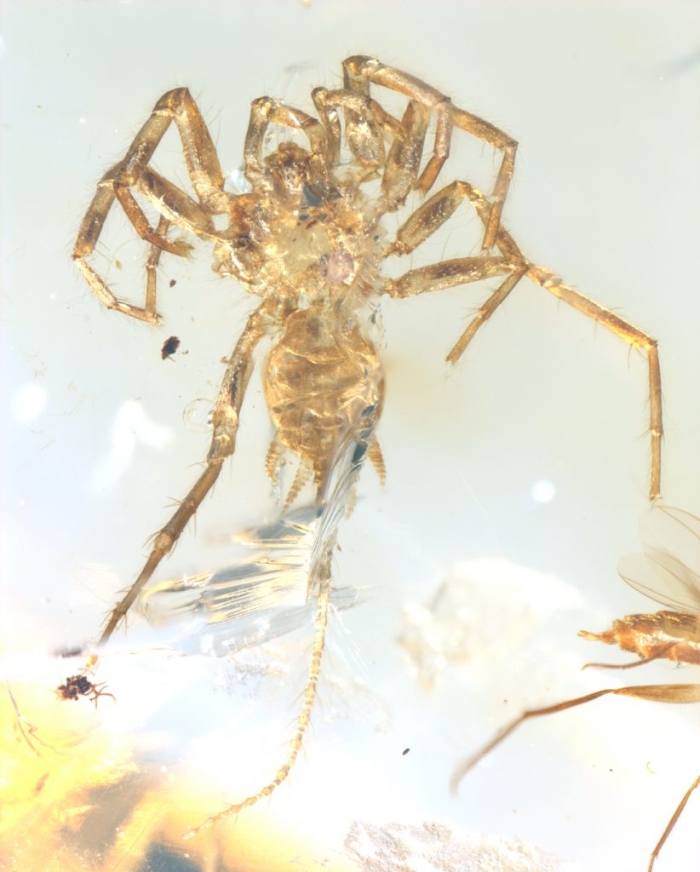 It also probably lived in or near trees, since it was encased in amber, but further details about its lifestyle are impossible to ascertain.

"We don't know if it wove webs," Selden said. "Spinnerets are used to produce silk but for a whole host of reasons - to wrap eggs, to make burrows, to make sleeping hammocks or just to leave behind trails. If they live in burrows and leave, they leave a trail so they can find their way back."

Selden belongs to one of two international teams who have just published papers on the arachnid - and each paper reaches a different conclusion. One study was led by Bo Wang, and the other by Diying Huang, both of the Chinese Academy of Sciences.

But there were key differences. C. yingi has a pedipalp modification for sperm transfer not seen in Uraraneida. And Uraraneida, unlike C. yingi, do not possess spinnerets.

According to Wang's team, this means that the newly discovered creature is closer to a modern spider, Araneae - a sister group to Uraraneida, a spider ancestor or close relative that had developed the spinneret, but not yet lost the telson.

Huang's team, on the other hand, believes that C. yingi falls squarely within Uraraneida. "The new fossils, which are extraordinarily well preserved, exhibit all the characters described for Uraraneida and other stemgroup spiders, such as the segmented abdomen with spigots and a long flagellum, while also bearing characters previously only known from Araneae, such as a modified male palp (presumably to function as a sperm transfer organ) and typical spider spinnerets with spigots," wrote the team in their paper.

They also note that, because spiders coexisted with Uraraneids during the Cretaceous (which we also know from amber fossils), this serves as evidence that Uraraneida did not evolve into Araneae.

More research (and probably more arguing) may need to be done to settle the debate, and it's possible we may never know the answer - but the find underscores the value of Cretaceous amber from Myanmar.

After a piece of amber surfaced in Myanmar (formerly Burma) in 2015 that contained part of a feathered dinosaur tail, scientists have been increasingly looking to the region for amber fossils. Two dinosaur wings and a Cretaceous bird have also been found in Myanmar amber.

C. yingi is known from four specimens from Myanmar (the teams described two each in their papers), which became available last year.

The two papers were published in Nature Ecology & Evolution here and here.