A new study has demonstrated crows can assign value to their tools just like we do.

"Many of us will fuss about a brand-new phone, making sure it does not get scratched, dropped or lost. But we may handle an old phone with a cracked screen quite carelessly," said behavioral ecologist Barbara Klump now at Max Planck Institute, Germany.

New Caledonian crows (Corvus moneduloides) are so renowned for their smarts that scientists have been using them as a model species to help puzzle out the evolution of tool use and associated behaviors like planning.

Not only can these clever crows use found objects as tools, they can shape or even build them from multiple parts that are individually useless – something previously only observed before in primates.

In the wild they use these twig tools, carefully held in their beaks, to annoy grubs safely tucked away in tree crevices. The grubs will bite the tool defensively, allowing the birds to withdraw and eat it. But crows have to put down their tools while eating, so they can fall to the ground or even get stolen.

The researchers used 27 wild caught crows for their experimental trials so their results weren't biased by previous training.

Offering the crows a choice between the two tool types, the team confirmed the birds strongly preferred to use hooked stick tools. 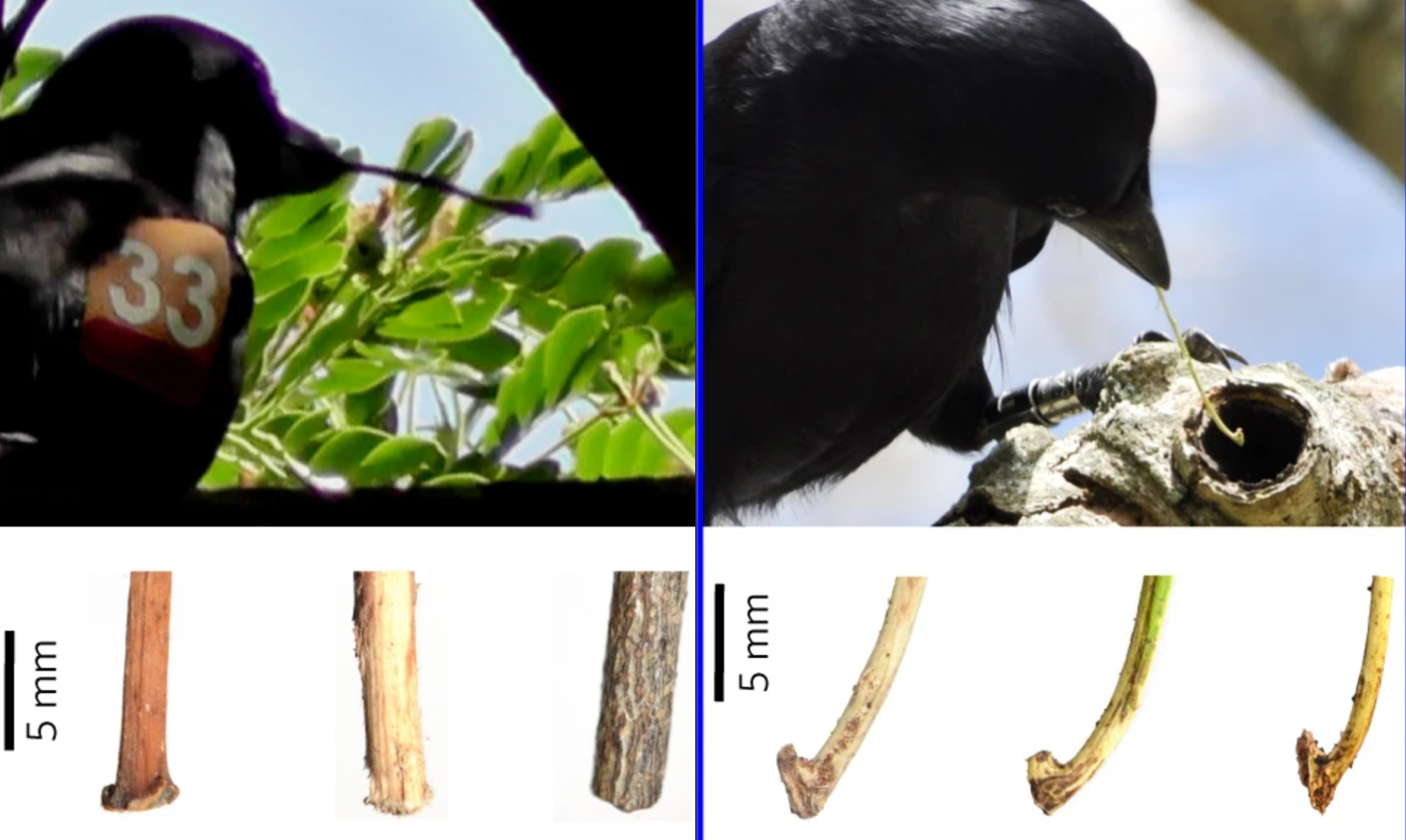 "Hooked tools are not only more costly to obtain, but they are also much more efficient," explained University of St Andrews behavioral ecologist Christian Rutz.

"Depending on the foraging task, crows can extract prey with these tools up to 10 times faster than with bog-standard non-hooked tools."

Seventeen of the birds were then observed during two trials each on separate days. In both, they were presented with logs containing different sized holes baited with meat or spiders. In one treatment they had access to branches appropriate for hooked tool construction and the other with only straight sticks.

This remained true when the hooked tools were supplied by researchers, suggesting the tool itself was the subject of assigned value rather than the time they put into it.

What's more, they used the most secure safekeeping method – storing the tools in holes – far more for hooked tools.

"It was exciting to see that crows are just that bit more careful with tools that are more efficient and more costly to replace," said University of St Andrews ethologist James St Clair.

"This suggests that they have some conception of the relative 'value' of different tool types."

Given corvids, including ravens and New Caledonian crows have also displayed the ability to plan ahead it makes sense they can also assign value to the objects they use to help prioritize them.

The team notes that not all New Caledonian crows make the hooked stick tools, so their findings may only be generalizable across those populations that do. Their sample size was also too low to fully untangle some of the variables, like material choice, they concede.

But at least one other species of crow, the Hawaiian crow (Corvus hawaiiensis) has also demonstrated such safekeeping behavior.

We've long underestimated the abilities of birds given their relatively small brains. But physiological studies have shown the dense packing of their neurons makes up for what they lack in size.

Behavioral studies are continually revealing these modern dinosaurs are capable of behaviors that we once only thought humans were capable of – such as self control – proving, like everything else biological, intelligence is a complicated and messy spectrum that didn't just spontaneously arise with the arrival of our species.

This research was published in eLife.