The Best Time For Researching The Cosmos Is Right Now. Here's Why

Homo sapiens have been treading this planet for around 350,000 years now. With our primate hands and our primate brains, we have expanded our curiosity beyond Earth's blue skies, into the unimaginably vast reaches of space.

Our discoveries over the millennia have been incredible - we've peeled back the aeons and stared at the shreds of radiation left over from the birth of the Universe as we know it. We have formulae and theorems that mathematically describe just about everything in the physical realm. We know how the stars move overhead, and what's deep inside the belly of our planet.

But it's true, what they say: we stand on the shoulders of giants. Each time of discovery is better than the time that came before, because we have all those previous discoveries to build on.

Right now, in the 21st century, might very well be the best time yet for trying to understand the cosmos. That's partially because of the cumulative knowledge we've acquired so far. And partially due to the sheer luck that we humans are here in the Universe now, 13.8 billion years after the Big Bang.

For centuries, astronomers hypothesised the existence of exoplanets - planets beyond the boundaries of our Solar System. But there was one problem: our instrumentation was not yet advanced enough to detect them.

That changed in January 1992. Astronomers Aleksander Wolszczan of Arecibo Observatory and Dale Frail of the NRAO whacked down one whale of a paper: they had detected what looked to be exoplanets, orbiting a pulsar 2,300 light-years away called PSR B1257 +12.

The discovery was confirmed later that year, and it was official: we'd found the very first exoplanets.

Since then, the field has exploded; to date, over 4,000 exoplanets have been confirmed in the Milky Way galaxy, with over 5,000 more candidates. (We've yet to detect extragalactic exoplanets, but that's probably only a matter of time.)

Those planets include gas giants like Jupiter and Saturn; ice planets like Neptune and Uranus; and rocky planets, like Earth, Mars, Mercury and Venus. And there are pecularities, too. The most common type of exoplanet, for instance, is the mini-Neptune, which we don't have here in the Solar System. Nor do we have hot Jupiters, gas giants orbiting perilously close to their stars.

These discoveries have greatly advanced our understanding of planetary systems, while deepening the mystery of Earth's seemingly unique properties that gave rise to and supported life for billions of years.

But we're only going to learn more. Thanks to ever-evolving techniques, astronomers are finding new exoplanets all the time. With the new generation of instruments - including TESS, which launched last year, CHEOPS due to launch in December 2019, and PLATO scheduled for a 2026 launch - we're right in the thick of the age of exoplanet discovery.

The Moon covers the Sun

You ever look at a solar eclipse and marvel that, while the Sun is huge and the Moon is tiny, somehow the Moon is just the right size to neatly cover the Sun? You should, because it's pretty incredible. 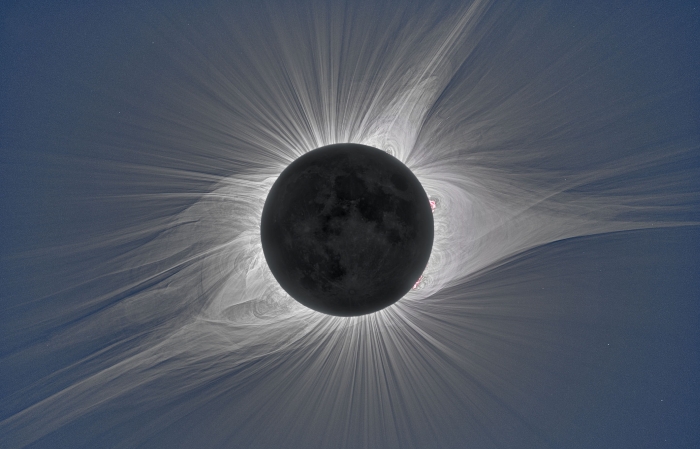 That means that the Sun and the Moon appear to be around the same size in the sky - but not always. The Moon's orbit around Earth is elliptical, which means sometimes it's a little closer and sometimes it's farther away; its distance can vary up to 50,000 kilometres in a single orbit.

So, there are two types of solar eclipse where the Moon completely crosses the Sun - the total eclipse, when the Moon is closer to Earth, appearing a little larger, and therefore completely blocking the Sun's light; and the more common annular eclipse, where a ring of Sun is visible around the edge of the Moon.

That's not just an amazing spectacle - because the Moon neatly obscures the brightness of the Sun's disc, it allows us to see structures in the Sun's corona we can't see normally, teaching us about the dynamics of stars.

Why are we lucky? Well, the Moon isn't going to stay where it is. It's actually moving away from Earth at a rate of around  3.82 centimetres (1.5 inches) a year. Another 600 million years and it'll appear too small for total eclipses.

It was 1783 when English polymath John Michell first proposed the theoretical existence of a mass from which not even light could achieve escape velocity. The idea of the existence of black holes didn't catch on for over a century. Even up until relatively recently, these mysterious objects were regarded as possibly only theoretical.

In 1978, French mathematician Jean-Pierre Luminet mathematically simulated, based on general relativity, what a black hole should look like. That was the first time the world had seen a real visual representation of these ultradense, to use Michell's term, 'dark stars'. There were other simulations over the years, of increasing sophistication. 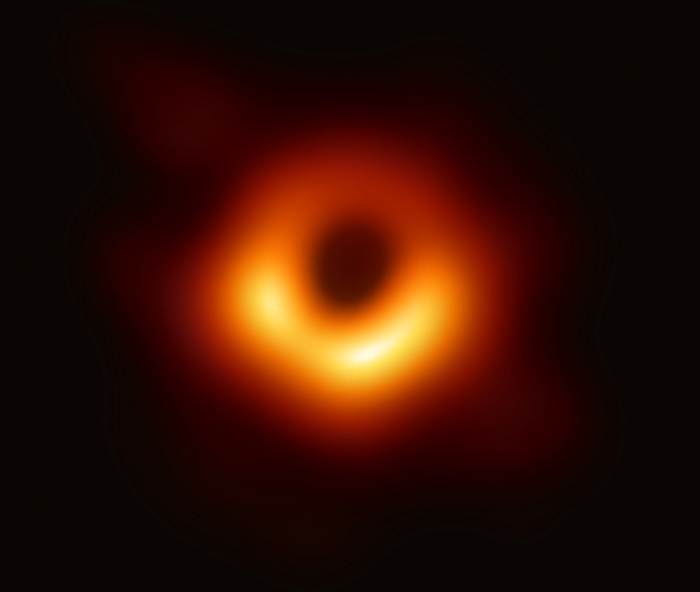 But, finally, last year, the culmination of a massively ambitious project came to fruition. The Event Horizon Telescope, a global collaboration that took years of work, had finally produced the first direct image of a supermassive black hole, in the centre of a galaxy called M87, 55 million light-years away.

And wouldn't you know it? Luminet's simulation was correct. As were Einstein's general relativity predictions, made over a century ago. It looks pretty fuzzy, but you can clearly make out relativistic beaming, whereby the light coming towards us is brighter than the light moving away. This means the material is orbiting the black hole.

There is still a lot left to learn, but this is it. Black holes exist, and we can see them. This project was extremely difficult to accomplish, but now the nut's been cracked, and we know how to get the kernel.

The next project for the team is a film of the supermassive black hole at the centre of our own Milky Way galaxy. We can't freaking wait to see it.

Our Solar System is around 4.5 billion years old, and it didn't always look the way it does now. In fact, some of the changes we can see with our very own eyes. According to Cassini data, Saturn's rings are raining into the planet at an astonishingly fast rate. 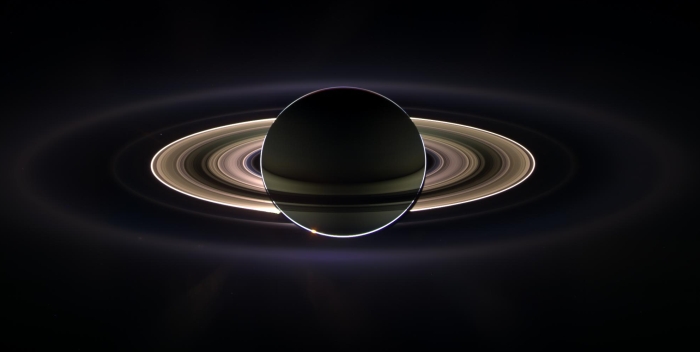 "We estimate that this 'ring rain' drains an amount of water products that could fill an Olympic-sized swimming pool from Saturn's rings in half an hour," said planetary scientist James O'Donoghue of NASA's Goddard Space Flight Center last year.

"From this alone, the entire ring system will be gone in 300 million years, but add to this the Cassini-spacecraft measured ring-material detected falling into Saturn's equator, and the rings have less than 100 million years to live."

Their research also suggested that the rings are young, only around 100 million years old, which means they would have formed during the Cretaceous. That's a matter of debate, but still pretty crazy to think about. In cosmic timescales, it's barely the blink of an eye.

Planetary scientists also think Jupiter once had thick, lush, Saturn-style rings that have since clumped together into the Galilean moons. Now it just has a few thin trace rings left, like the ghosts of rings.

We don't know how planetary rings form, but being here on Earth in this time, when multiple stages of ring lifespans are still in the Solar System, is an incredible coincidence that is helping us to slowly unravel their secrets.

In his theory of general relativity published in 1915, Albert Einstein predicted that massive events would send light-speed waves rippling through the fabric of spacetime, like the ripples that spread across the surface of a pond when you drop a rock in (but in three dimensions).

That first discovery kicked off an entire new field of gravitational wave astronomy. Since then, many more black hole collisions have been detected, and one spectacular collision between two neutron stars.

And there's more on the wishlist. Astronomers think that earlier this year they detected the collision of a neutron star and a black hole for the first time, which could tell us all sorts of things, such as confirming the existence of neutron star and black hole binary systems, and the rotation and axial tilt of both bodies - which can tell us how they formed.

We have never found a body in this mass gap, so the jury is still out on whether they'd be big neutron stars or teeny tiny black holes.

As you can see, we're only just starting to unravel the mysteries gravitational wave astronomy can reveal.

The future looks even brighter. We're in the process of falling into a vast gravity well of knowledge. The next generations of space- and ground-based instruments are so much more powerful than their predecessors, from the space-based gravitational wave observatory LISA, Hubble's successor, the James Webb Space Telescope, CHEOPS, WFIRST and ATHENA, to ground-based observatories to such as the Giant Magellan Telescope and the Square Kilometre Array.

We're stepping up our Solar System exploration, too. We're sending more probes and sample return missions to asteroids. NASA is sending a probe to Europa to look for signs of life. Humans are going to return to the Moon.

And genuine plans are underway to send humans to Mars.

At this point in our time in this Universe, we are like a diver poised on a precipice, or a bird about to fly - raised high by an entire ladder of giants. Space is out there, and it's huge, and it's full of potential and discovery. It's an absolute, awe-inspiring wonder, and we are honoured to experience it.