What Was The Great Dying That Almost Wiped Out Life on Earth 252 Million Years Ago?

Roughly 250 million years have passed since Earth experienced an extinction so profound, it's become colloquially known as the Great Dying.

One by one, species of plant and animal – both aquatic and terrestrial – winked out of existence as entire ecosystems struggled to thrive. Also known as the Permian-Triassic extinction event or end-Permian extinction, it took roughly 100,000 years, if not more; by the time it was over, all but a handful of species had dwindled away to nothing.

In time, those few remaining species would provide a starting place for new species, which would evolve into lineages that form the basis of today's biodiversity.

Compared to the Cretaceous extinction event that wiped out most of the non-avian dinosaurs 65 million years ago, the Great Dying was much more widespread, sparing no class of life on Earth.

Exactly what caused this relatively rapid loss of life has been the subject of great debate, complicated by a scarcity of fossils, the passing of so much time, and the complexity of evidence.

Today we have a broad understanding of the events that are likely to have contributed to conditions that were just too hostile for most of Earth's species to manage. And it could tell us a thing or two about whether we'll ever see anything of its like again.

Our planet was a very different place during the geological period referred to as the Permian. Before the Great Dying, a vast expanse of ocean dominated the surface, surrounding a single continent named Pangaea. 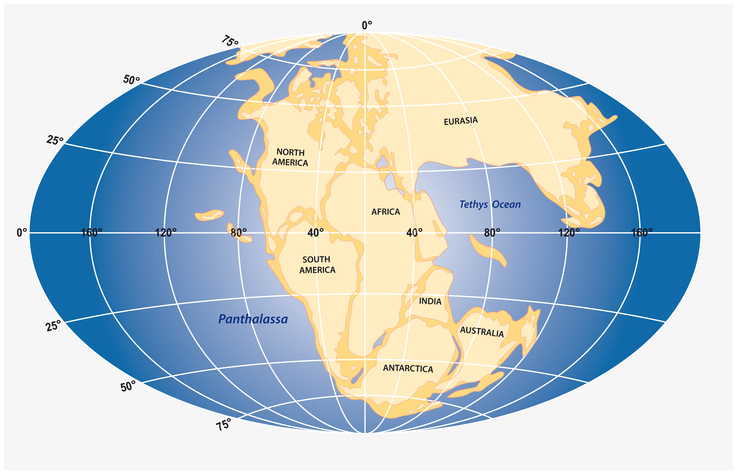 No longer were there the endless expanses of swampland full of towering horsetails that characterized the preceding Carboniferous period, with its oversized insects and sprawling carpets of mosses. With the planet's landmasses crammed together, the climate was divided between an arid interior and a cooler coastline that gave way to wide stretches of shallow coastal waters.

It was this dryness which would shape the biodiversity of this 50-million-year stretch of time.

Tougher, seed-bearing plants, like conifers, took root far and wide. Amphibians were finding fewer suitable environments, giving way to animals that didn't rely on water to reproduce. These included synapsids – the ancestors to today's mammals – and sauropsids, which would give rise to the family tree of birds and reptiles. Marine animals that appeared during the previous period, such as the nautilus-like ammonites and species of bony fish and shark, continued to thrive in the sunlit waters.

While life diversified early in the Permian, it wouldn't last. Some time around 260 million years ago, biodiversity took a sharp hit, with around three-quarters of land-based tetrapods disappearing from the fossil record.

As bad as this sounds, this mid-period catastrophe would be nothing compared with the losses Earth would incur 10 million years later, at the end of the Permian, when something killed off more than 80 percent of all marine species, and as much as nearly 90 percent of all tetrapods.

What caused the Great Dying?

One of the main fossils associated with the Great Dying is that of an eel-like marine creature called Hindeodus parvus. The oldest known fossil of the species is found in rocks near the Chinese city of Meishan. Officially, this discovery defines a clear line between the end of the Permian and the beginning of the dinosaur's rule in the Triassic.

Little more than a convenient landmark, the animal's appearance represents stark changes in mineral composition and fossil diversity within the surrounding rocks that we now recognize as signs of a global extinction event.

Applying the lessons learned from a single site to events that shook the entire planet is as challenging as it sounds. Scientists know something big happened, but pinpointing it to something specific – let alone building a complicated picture of a series of unfortunate events – requires a broad range of evidence collected from all around the world.

A vast province of igneous rock found in Siberia, for example, was deposited in a 2-million-year period roughly 252 million years ago. To leave such a huge amount of molten rock, these volcanic eruptions must have also spewed out a lot of other materials, like carbon dioxide, ash particles, sulfur, and other various minerals. Additional evidence shows the volcanism literally cooked the surrounding landscape, releasing additional loads of soot and carbon dioxide into the atmosphere.

Like finding a bullet casing at a murder scene, it's an easy link that doesn't go quite so far as to tell a detailed story. Just how emissions from the Siberian eruptions made the planet so inhospitable to life at that time is open to speculation.

Given the role carbon emissions play in our current climate crisis, global warming is an obvious place to start. While temperatures did increase, it doesn't perfectly align with the drops in biodiversity around the time of H. parvus. This doesn't mean it didn't play a part – but it does suggest something more is at work.

Ocean acidification seems to have intensified following the volcanic eruptions, affecting shell-producing marine animals. It's also possible high doses of other minerals, such as nickel, led to blooms of microbes that depleted oxygen and then rotted, producing huge amounts of methane.

Yet there are signs of a possible decline in diversity of land animals long before the first ash from the volcanoes settled around the world.

Alternatively, pulses of volcanic activity over a long period might have chewed away at the ozone layer, affecting the reproduction of many plant species. It's an interesting idea that could certainly cause mass carnage, if not for the fact some studies argue terrestrial plant life was barely affected; let alone responsible for ecological collapse.

Yet other studies hint at a 'second shooter' – volcanoes in southern China churning out aerosols that cooled the planet prior to the subsequent warming event.

Whatever caused the biosphere to thin as much as it did 251 million years ago, it was clearly complicated.

The simple answer is we just don't know. Earth is a very different place today, with a scattering of continents separating several oceans teeming with biodiversity. While we're not expecting any major volcanic events in the near future, it's enough of a potential threat that at least some research bodies, like NASA, have plans in place on how to monitor for climate risks.

Yet we don't need to imagine the impact of volcanic activity to consider the consequences of rapid injections of carbon dioxide into the atmosphere. If the end-Permian extinction can tell us anything, it's that the biosphere can fall apart in complex ways, where multiple triggers can set off a domino effect that can take millennia to unfold.

Many scientists now agree we're in the midst of a sixth extinction and a climate crisis, with our ecosystems rapidly changing. That's not to say what we're seeing now with widespread changes to weather systems and sea levels is anything close to the Great Dying.

But it does show it might not take very much to wipe out all but the most robust of species.